Pope Francis addresses a joint meeting of the U.S. Congress in the House Chamber on Capitol Hill in Washington on September 24, 2015. Photo courtesy of REUTERS/Jonathan Ernst *Editors: This photo may only be republished with RNS-POPE-CONGRESS, originally transmitted on Sept. 24, 2015, and with RNS-PRAYER-CAUCUS, originally transmitted on Sept. 29, 2015.

WASHINGTON — When Pope Francis left the Capitol last week, prayer did not leave with him.

One night a week, the taxpayer-funded congressional Prayer Caucus meets in an ornate room in the U.S. Capitol to defend the role of (mostly) Christian faith and prayer in the U.S. government.

The caucus was created by Rep. Randy Forbes, R-Va., in 2005, and now includes about 90 members of the House, nearly all Republicans, one U.S. senator and one paid staff member.

“In addition to their commitment to putting aside political differences and uniting in prayer for our nation, members of the Congressional Prayer Caucus work together engaging the legislative process to protect free exercise for Americans of every faith or no faith,” Forbes said in a statement. “Some recent issues Prayer Caucus Members have engaged on include reinforcing religious freedom for all faiths in the military, supporting and protecting the autonomy of churches and faith based organizations, and working to ensure every American is free to live according to their beliefs without fear of punishment by the government.”

Forbes declined to be interviewed for this story.

Like other congressional caucuses, several members kick in shares from their taxpayer-funded office accounts to cover the approximately $50,000 annual salary of the staff member, Amy Vitale, who tracks legislation, drafts letters and generally supports the work of the caucus.

The Prayer Caucus also has an outside non-profit organization that supports its efforts, as are many other caucuses. The Congressional Prayer Caucus Foundation operates out of a Chesapeake, Va., building Forbes owns that also houses his campaign office. His wife, Shirley Forbes, is one of three unpaid directors of the foundation. The foundation has one paid staff member, executive director Lea Carawan, but operates entirely on private funds. Carawan declined a request for an interview.

The caucus is partly about prayer. The members gather in the House majority leader’s ceremonial office and pray for the nation and also pray for constituents who are in distress, signing a card of support that is then sent to them.

But the group also aims to extend the reach of faith and prayer in public life. 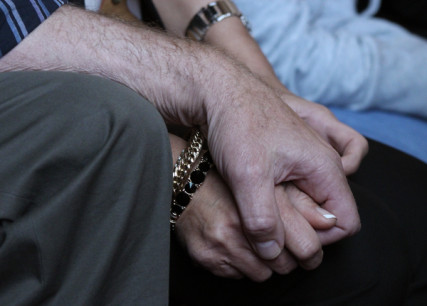 A couple clasps their hands in prayer at the National Day of Prayer observance on Thursday (May 2) on Capitol Hill in Washington. RNS photo by Adelle M. Banks

“We do what we can to make sure that legislation emerges with what we believe to be American, Christian values,” said caucus member John Fleming, R-La. “We believe that a democracy is only functional if there is a certain level of virtuousness among the nation. Freedom also requires a certain responsibility and that requires a certain moral code. The moral code that we as Americans have lived by for over 200 years is based on what? The Ten Commandments.”

And the caucus is trying to reach beyond the U.S. Capitol. Forbes and the Caucus “will bring to our attention where religious liberties have been under attack,” said caucus member Joe Wilson, R-S.C. “We try not to be judgmental or argumentative, but we will bring to the attention of authorities what the law is that protects religious liberty.”

For example, the group sent a letter to the Navy in March in defense of controversial chaplain Wesley Modder who, according to the Military Times, had been disciplined for “scolding sailors for homosexuality and premarital sex.” Modder’s “beliefs on sexual intimacy do not constitute a legally viable reason to bring action against Chaplain Modder or any member of the military” the caucus members wrote. “It is dangerous to fall prey to the fundamentally false proposition that individuals who support natural marriage can only be motivated by animus for others.”

Forbes and other caucus members also got the Air Force to rewrite its basic rule book to remove language about the primacy of religious neutrality in the military and to offer more protection for expression of controversial religious views. Rowan County, Ky., Clerk Kim Davis argues with David Moore and David Ermold, after they were denied a marriage license at the Rowan County Courthouse in Morehead on September 1, 2015. Photo courtesy of USA Today, via The (Louisville, Ky.) Courier-Journal, photo by Tim Webb

The Congressional Prayer Caucus Foundation is more aggressive in its goals: “There is a concerted effort to remove God from our culture, and negate the influence that the Christian faith had on establishing the principles upon which our liberties are secured,” says the mission statement on its website.”This has created an environment where the facts regarding the role Judeo-Christian principles play in establishing and maintaining a free Republic are being eliminated. We are creating a movement to reverse this trend.”

In an email to subscribers last week, the foundation urged prayer for the members of the Congressional Prayer Caucus who are “spearheading a strategic movement of national, state and local leaders and citizens who are working together to promote prayer, protect religious freedom and restore, upgrade and popularize America’s founding spirit and the principles related to faith and morality that shaped this Great Republic.”

Forbes and a dozen other Prayer Caucus members traveled to North Carolina in March to launch an initiative called PrayUSA, asking government officials and other to sign a resolution calling for prayer. The initiative is part of “a tactical strategy to effectively challenge the growing anti-faith movement in our Country,” the foundation says.

And the foundation blog advocates strongly for the defense of conservative Christians like Kentucky clerk Kim Davis, who was briefly jailed for refusing to sign marriage licenses for gay couples.

“Criminalizing Christianity is not the America envisioned by our Founding Fathers,” reads a blog post on the foundation website about the Kim Davis saga. “Sadly, the balance of power in our country is being undermined within the legislative branch and increasingly supplanted by both executive fiat and judicial tyranny. The government was never designed to replace God and therefore, does not have the authority or right to redefine the laws of nature or of nature’s God….. We are fighting for our freedoms—silence and inactivity will leave us vulnerable and open to further attack. Christian…it is time for us to wake up and be engaged!”

Roy Speckhardt, executive director of the American Humanist Association, said “It’s clear that this entity is pushing to merge church and state when it comes to making prayer — particularly Christian prayer — a part of government responsibility.”