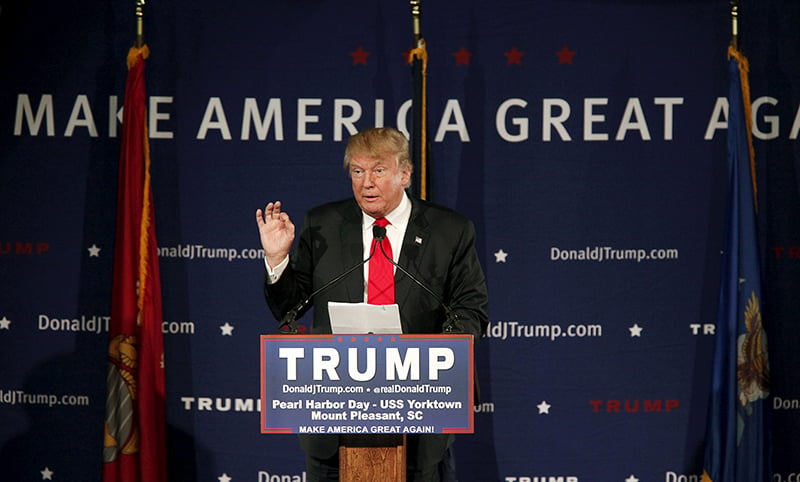 Welcome to America’s latest culture war. As the battle over same-sex marriage recedes into the fog of memory, Islam has become the great obsession of cultural conservatives.

Ben Carson has said that no Muslim should be president of the United States because Islam is incompatible with our Constitution. But the undisputed heavyweight champion of today’s culture wars is Donald Trump, who, in response to the November terrorist attacks in Paris, called for closing down some American mosques and for creating a database to track all Muslims living in the USA.

On Monday, one day after President Obama urged Americans not to “turn against one another” out of fear in the aftermath of the terrorist attack in San Bernardino, Calif., Trump trumped his prior statements on Islam with his most incendiary proposal to date: a “total and complete shutdown of Muslims entering the United States.”

On the left, former Maryland governor Martin O’Malley called Trump a “fascist demagogue.” Nihad Awad, executive director of the Council on American-Islamic Relations, said Trump “sounds more like the leader of a lynch mob than a great nation like ours.”

As a religion professor, a believer in religious liberty and an American who would like to continue to host Muslim friends from abroad at my dining table, I too find Trump’s latest provocation abhorrent. As a historian, however, I have to say that Trump is no anomaly.

Trump is popular because he is giving voice to anxieties deeply held in the heartland, not least the anxiety that “they” are taking away “our” country. In North Carolina, for example, 40% of Republican voters in a recent Public Policy Polling survey think Islam should be illegal. But Trump also stands in a long line of culture warriors from the late 18th century to today.

Protestants attempted to banish both Catholics and Mormons from the American family on the theory that their religions were incompatible with American values. Just as some today argue that the religious liberties of Muslims should not be respected because Islam is not really a religion, many 19th century Americans claimed that Roman Catholicism was really a political scheme to take over the country and that Mormonism was really an insidious business enterprise. Liberals who allowed Catholics or Mormons to hide behind the cloak of religious liberty were called either dupes or fools (or both) because popes and Mormon presidents alike were considered unrepentant theocrats.

So today’s Islam wars are not an aberration. They are the norm. Culture wars are a recurring feature in U.S. history — episodes in the story of a not-so-indivisible nation forever at war with itself.

Culture wars persist because the founders never quite decided whether they wanted a Christian country like England had been or a secular one like France would become. Most basically, culture wars persist because conservatism persists, and because conservatives have from the French Revolution forward seen cultural warfare as a way to win political power by preaching a gospel of the fallen and the lost — by lamenting how far America has descended from the glory of its founding and by promising to “make America great again.”

When faced with a culture war that takes aim at Catholicism or Mormonism or Islam, Americans have always had two choices. One is to give in to their fears — to banish or even kill those who do not worship like them. The other is to remember that what really makes this country great is the freedoms it offers, not least the freedom of religion. Stephen Prothero is a professor in Boston University’s religion department and the author of “The American Bible: How Our Words Unite, Divide, and Define a Nation.” Photo courtesy of HarperSanFrancisco

One reason for enshrining religious liberty in the Bill of Rights was to take it outside the excitements of the moment. Americans have always been tempted to restrict liberty when they feel under attack. This is precisely when we need to stand up for our liberties and against the demagogues who would diminish our country by taking them away.

(Stephen Prothero, a professor of religion at Boston University, is the author of the forthcoming book “Why Liberals Win the Culture Wars (Even When They Lose Elections): The Battles that Define America from Jefferson’s Heresies to Gay Marriage.” This column first appeared in USA TODAY.)