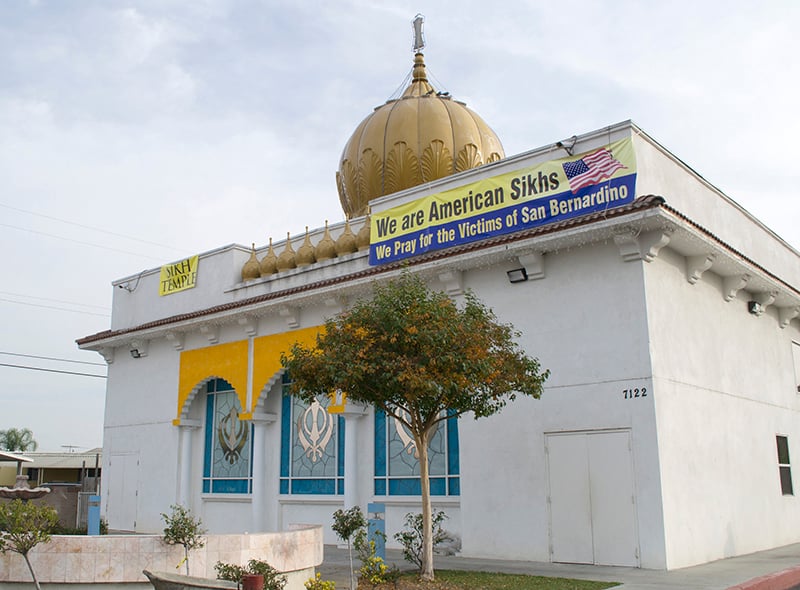 The Gurdwara Singh Sabha in Buena Park, Calif., displays banners identifying it as a Sikh temple. Sikhs have often been confused for Muslims and made the targets of xenophobic crimes after terror attacks linked to Islamic extremists. Religion News Service photo by Katherine Davis-Young

(RNS) It’s a weekday afternoon, and Jaspreet Singh is usually at work, but power drill in hand, he’s attaching new “security cameras in use” signs to the outside of the Sikh temple in Buena Park, Calif.

Singh took the time off from his job as an information technology manager to protect the temple where he serves as a board member after he learned it had been vandalized.

“I was definitely shocked because our community is very peaceful. We don’t preach any hate. We respect all religions,” he said. Jaspreet Singh, took the time off from his job as an information technology manager to protect the temple where he serves as a board member after he learned it had been vandalized. Photo courtesy of Jaspreet Singh

He was less surprised when he found out that the graffiti painted onto the walls of the temple’s parking lot and a truck parked there included slurs about “ISIS” and “Islam.” “Whenever terrorists attack, or any such incidents happen, there have always been backlashes,” he said.

And anti-Muslim backlashes have often targeted Sikhs, who are frequently mistaken for Muslims. The turbans worn by Sikh men in particular prompt the perpetrators of hate crimes to assume that their targets follow Islam.

The graffiti at the temple, Gurdwara Singh Sabha, was discovered on Dec. 6, four days after terrorists with apparent connections to radical Islamists killed 14 people in San Bernardino, about 50 miles from Buena Park. Leaders of the gurdwara, or Sikh house of worship, asked authorities to investigate the vandalism as a hate crime. Graffiti is seen on the walls of the parking lot at the Gurdwara Singh Sabha in Buena Park, Calif., on Dec. 10, 2015. The vandalism was first reported on Dec. 6. Religion News Service photo by Katherine Davis-Young

The Sikhs in Buena Park, where the gurdwara serves 1,000 people, were hardly the only members of their faith targeted after the San Bernardino massacre.

Sikhism is the world’s fifth-largest religion, with about 25 million practitioners, including more than 500,000 in the U.S. It originated in Northern India independently from Hinduism, Islam and other religions. Most Sikh men wear turbans and beards as signifiers of faith.

Their style of dress lines up with stereotypical symbols of terrorism, said Simran Jeet Singh, professor of religion at Trinity University. (He is not related to Jaspreet Singh; many Sikh men use the surname Singh.)

“My father came to this country in the 1970s. Back then, he was called ‘ayatollah.’ When I was a kid I got called ‘Osama bin Laden.’ Now we’re being called ‘ISIS,’” he said. “All of these xenophobic slurs come from a misunderstanding of who Sikhs are.”

Soon after terrorists linked to the Islamic State group attacked in Paris in November, for example, Canadian Sikh journalist Veerender Jubbal was photoshopped to appear as one of the suicide bombers. The image spread widely around the Internet and some news media even published the image, believing it to be authentic.

Sikhs have also often been targets of violence. Days after the terror attacks of Sept. 11, 2001, a man ranting about “towel heads” shot and killed a Sikh gas station owner in Mesa, Ariz. In 2012, a white supremacist killed six Sikh worshippers in their Wisconsin gurdwara. And in September, a man shouting “terrorist” beat a Sikh man unconscious outside Chicago.

That perpetrators of these crimes should attack Sikhs, mistaking them for Muslims, is not surprising, said Randy Blazak, a professor of sociology at the University of Oregon who researches hate crimes.

“By framing it as mistaken, there’s an implication that there’s a correct identity who should be targeted,” he said. “And it takes away agency and accountability from perpetrators, like it should, in some way, be forgivable.”

Whether or not attackers strike their intended targets, Simran Jeet Singh sees anti-Muslim sentiment and actions as evidence of a larger problem. “Political rhetoric now is certainly fanning the flames of ignorance and fear,” he said.

When Jaspreet Singh headed to the store to buy security equipment and supplies to clean up his vandalized gurdwara, he said a woman in the store’s parking lot shouted expletives at him, telling him to get out of the U.S. Still, he said he has loved living in the U.S. since arriving from India 12 years ago, despite the bigotry directed at him and his community.

The teachings of his faith remind him to stay optimistic.

“If a tragedy happens,” he said, “all the communities should come close and protect each other rather than splitting ourselves and hating each other and blaming each other.”