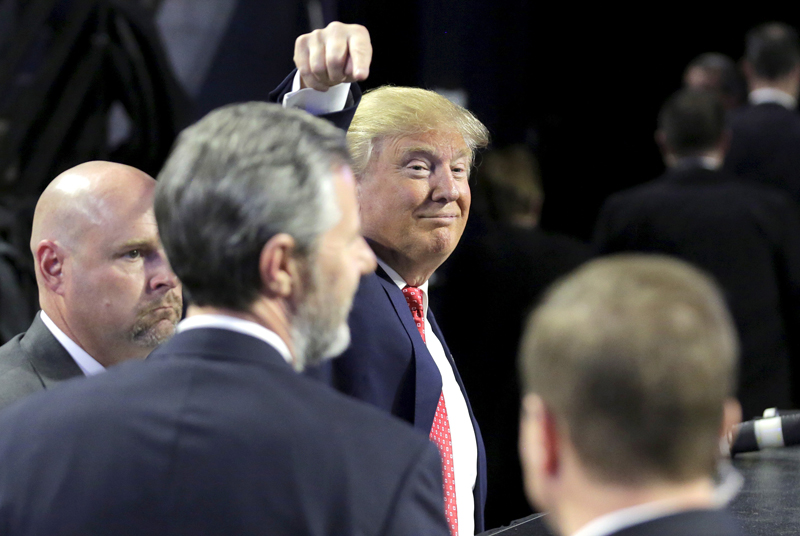 (RNS) The tragedy of billionaire Donald Trump’s popularity in the Republican presidential nominating contest has many concerned citizens asking: How can this be happening?

People horrified at the specter of Trump’s becoming the Republican nominee would do well to consider how they are culpable in this travesty.

With Jerry Falwell Jr.’s endorsement of Trump for the GOP nomination this week, the Christian right political movement is due for a long moment of sober reflection.

Republicans have not succeeded electorally because people find philosophical arguments for conservatism convincing. They’ve succeeded because of a groundswell of anti-government, anti-elite and nativist sentiment among fearful or aggrieved whites.

In a similar vein, if the Christian right consisted of winsome evangelical Ph.D.’s and their Twitter followers, it would not be very influential. But because the movement encompasses loudmouthed preachers, obnoxious broadcasters and every American who claims to cherish “traditional family values,” it is powerful enough to guide party platforms, propel candidates and exercise influence on government and policy.

Every movement must negotiate the tension between principles, ideals and purity on the one hand and breadth, power and prestige on the other.

But the Christian right faces a critical choice: It can be small and have integrity, or it can be “yuge” and disastrous.

Leaders have labored tirelessly to keep LGBT-affirming people outside the big tent of evangelicalism. But evangelicals have been timid in explaining the meaningful distinctions between their faith and the ideology of crude and stridently partisan radio hosts like Rush Limbaugh and Erick Erickson.

In the early days of the Christian right, religious leaders and political strategists knew they needed showmen, mega-pastors and media-savvy communicators to rally the troops. The Rev. Jerry Falwell fit the bill perfectly.

Liberty University was a self-proclaimed bastion of fundamentalism. Today, it strives to be in the evangelical mainstream.

There’s a cost to regarding institutions like Liberty and its president, Jerry Falwell Jr., as evangelical like any other.

Christian leaders who don’t stand up to their crude brethren lack standing to evict Trump disciples from the evangelical big tent.

The religious right learned about the trade-offs of political clout. Sometimes the relationship between power and integrity seems to run in opposite directions. At the height of its influence, the movement completely ignored or sloppily reinterpreted Christian teaching on most issues not directly related to human sexuality.

The late David Kuo, an evangelical Bush administration staffer who came to see his work as a “sad charade,” suggested in a 2006 book that Christians “fast from politics for a season.”

Some did, retreating from blind partisanship and claiming a more rigorous and theological higher ground.

But power is seductive, as this new generation of evangelical activists will eventually discover when a Republican administration comes to power and offers them plum jobs, connections to fame and fortune, and seats at the president’s table.

Evangelical leaders must do more than make the case that an informed Christian conscience cannot support Trump for president. They need to explain why figures like Jerry Falwell Jr. should not be heeded.

Conservative evangelicalism has an easy time saying farewell to anyone who affirms LGBT inclusion in the church. But it struggles to break definitively with individuals and institutions that are more Republican than Christian but nevertheless adhere to the “right” doctrines.

Evangelicals are reliable advocates for unborn children and for religious freedom. Some advocate for the poor, the sick and the outcast. But they need to say more clearly that the Republican Party is an idol, that the politics of exclusion and racial resentment are un-Christian and that candidates’ rhetoric should be as kind and compassionate as their policies.

Only then can they begin to make Christian political engagement great again.