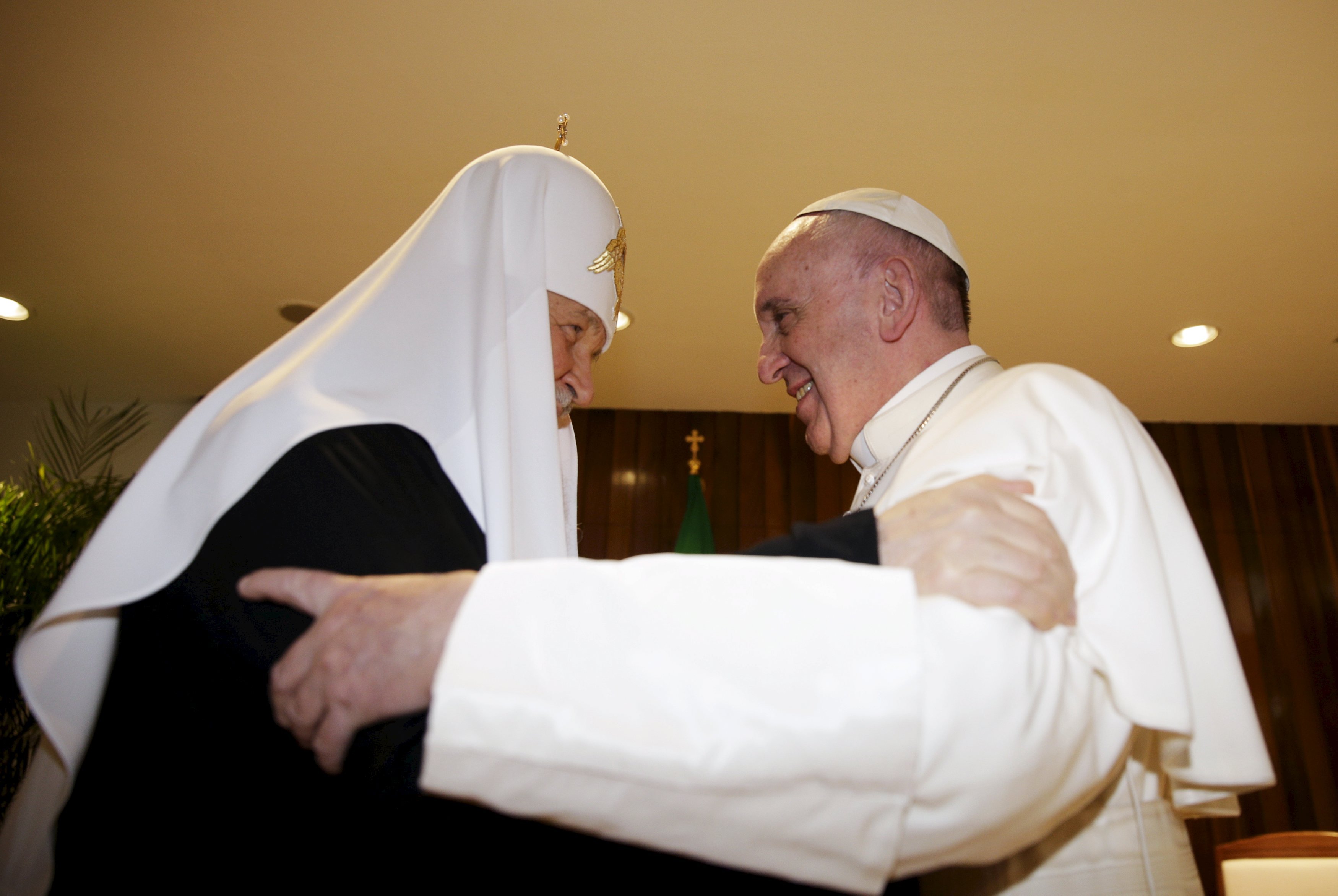 HAVANA (Reuters) Pope Francis and Russian Orthodox Patriarch Kirill embraced and kissed in a historic meeting, uniting to issue a global appeal for the protection of Christians under assault in the Middle East.

Nearly 1,000 years after the Eastern and Western branches of Christianity split apart, the meeting on Friday (Feb. 12) at an airport terminal in Cuba was the first ever between a Roman Catholic pope and a Russian Orthodox patriarch.

“In many countries of the Middle East and North Africa whole families, villages and cities of our brothers and sisters in Christ are being completely exterminated,” they said in a joint declaration in apparent reference to violence by militant groups such as Islamic State.

“Their churches are being barbarously ravaged and looted, their sacred objects profaned, their monuments destroyed.”

They also said large-scale humanitarian aid was required to tend to refugees fleeing Syria and Iraq, lamenting the “massive exodus of Christians.”

Defending Christians from the Islamic State and other enemies is a cause dear to both the pope and patriarch, and a chief reason behind this visit, which was not expected to make headway in resolving the theological differences between the two sides.

Cuban President Raul Castro stood to the side during the ceremony, enjoying another moment in the international limelight after receiving Francis last year and restoring diplomatic relations with the United States recently, meeting President Barack Obama in Panama in April.

Cuba is also sponsoring peace talks between the Colombian government and leftist rebels seeking to end a 50-year war.

“If it continues this way, Cuba will be the capital of unity,” Francis said.

“Now what’s left is Colombia,” Castro told reporters after the pope boarded his plane for Mexico, where Francis arrived on Friday evening for a five-day visit to some of the poorest and most violent corners of the country.

Dissidents in Cuba’s one-party political system have remarked on the government’s willingness to promote dialogue for foreigners while dismissing political opponents as mercenaries doing the bidding of the United States.

The two religious leaders, guests of a Communist government, came together only a week after the encounter was announced. Such a meeting had eluded their predecessor, but Francis had issued a standing invitation to meet anytime, anywhere.

The moment came while Kirill was visiting the Caribbean island and Francis added a brief stop on his way from Rome to a long-scheduled visit to Mexico.

Francis, dressed in white with a skullcap, and Kirill, wearing a tall, domed hat and white stole over black robes, joined arms and kissed on both cheeks when they met inside the terminal.

“Finally,” Francis said as he and Kirill entered through doors on opposite sides of a room at Havana airport. “We are brothers.”

“It is very clear this is the will of God,” the pope said.

Their meeting carried political overtones, coming at a time of Russian disagreements with the West over Syria and Ukraine.

The Russian Orthodox Church is closely aligned with the Kremlin, which is in turn an ally of Cuba.

The Argentine pontiff helped the rapprochement between the United States and Cuba after more than five decades of estrangement.

The pope, leader of the world’s 1.2 billion Catholics, is seeking to repair a much longer rupture. Eastern Orthodoxy split with Rome in 1054.

Kirill arrived in Havana on Thursday and was also greeted by Castro, an ally of Russia who also received Francis in Cuba just five months ago.

The Argentine pontiff previously played a role in rapprochement between the United States and Cuba, which restored diplomatic relations last year after a 54-year break.

Now the pope is seeking to repair a much longer rupture.

Eastern Orthodoxy, based in what was then Constantinople — modern-day Istanbul in predominantly Muslim Turkey — split with Rome in 1054. The patriarch of Constantinople is considered the “first among equals” among all the Orthodox churches, which are largely based in Eastern Europe and the Middle East and are often organized by nationality and culture.

In 1964, Pope Paul VI met Patriarch Athenagoras of Constantinople in Jerusalem, a historic meeting during which they formally lifted the anathemas that had sealed the ancient schism. Francis has also met with the current Constantinople patriarch, Bartholomew.

But mutual suspicion between Rome and Moscow, as well as the complications of the Cold War, had prevented any meeting between the Russian church leader and the Roman pontiff.

Although the Russian patriarchate was recognized by Constantinople just over 400 years ago, today the Russian church counts some 165 million of the world’s 250 million Orthodox Christians and it wields and influence and independence in proportion to those numbers.

That’s why observers say this summit in Havana was especially momentous.

Kirill is on a longer stay in Cuba than Francis and will visit Cuba’s small Russian Orthodox Church, built between 2004 to 2008 and attended by Russian holdovers from the decades of Soviet influence in Cuba.

Russian President Vladimir Putin has supported the Russian church, which in turn has backed Kremlin foreign policy, most notably in Ukraine and the Middle East.

Putin has also improved relations with Cuba, which were strained following the collapse of the Soviet Union in 1991.

(Reuters with additional reporting by RNS)