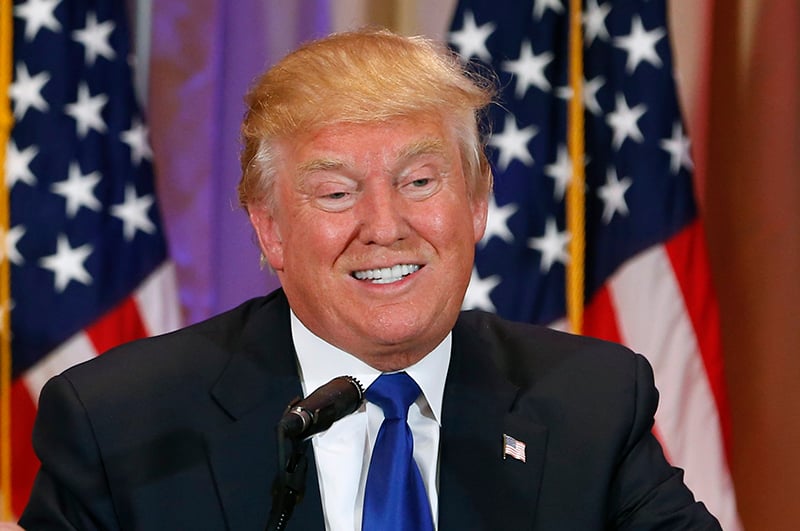 Republican presidential candidate Donald Trump speaks about the results of Super Tuesday primary and caucus voting during a news conference in Palm Beach, Fla., on March 1, 2016. Photo courtesy of REUTERS/Scott Audette
*Editors: This photo may only be republished with RNS-SUPER-TUESDAY, originally transmitted on March 3, 2016.

The businessman and Republican presidential candidate won seven states: Georgia, Vermont, Virginia, Alabama, Massachusetts, Arkansas and Tennessee. The last is the most evangelical of the states voting, with 67 percent of Republicans identifying themselves as such.

But self-identification as an evangelical is “a broad brush within a Southern state that’s pretty Christianized,” such as Tennessee, said David Kinnaman, president of the Barna Group and co-author of “Good Faith: Being a Christian When Society Thinks You’re Irrelevant and Extreme.”

Tellingly, Trump came in fourth in “one of the most famously evangelical Republican precincts in the country” — Liberty University’s precinct in Lynchburg, Va., according to FiveThirtyEight. This despite the fact that Liberty President Jerry Fallwell Jr. had endorsed Trump after the candidate spoke on campus.

And leading up to Super Tuesday, evangelical pastor and best-selling author Max Lucado criticized the public’s support for Trump, while Russell Moore, the Southern Baptist Convention ethicist, alluded to it as one of the reasons he no longer wants to be called an evangelical.

Others took to social media as the results rolled in to call out evangelicals’ support for Trump.

"Evangelical" means "good news." And they are voting by the bus load for Trump. I don't think that is good news at all. #SuperTuesday

Who would Jesus vote for? To him walls, wealth, & torture are non-starters, so probably the Jewish New Yorker from Vermont.

One of the questions looming over Super Tuesday, Kinnaman said, was whether Cruz and Sen. Marco Rubio, running neck and neck behind Trump, could distinguish themselves from each other and whether there would be enough pressure to force either to drop out of the race.

“Cruz had more state wins than Rubio did, so the possibility of Cruz sticking in it is very strong,” Kinnaman said.

In a speech after winning both Texas and Oklahoma on Tuesday, Cruz asked the other candidates who hadn’t won any states or a significant number of delegates to “prayerfully consider” coming together to support him in order to defeat Trump. Later, it was announced Cruz had won a third state, Alaska, and Rubio had won his first state, Minnesota.

Meantime, Kinnaman said, “It’s showing this is one of the more tribalized elections we’ve encountered.”

Sanders won four states, while former Secretary of State Hillary Clinton also had a big night, winning seven states and 1,055 delegates, by CNN’s count. (While Trump won the same number of states, he gained only 315 delegates).