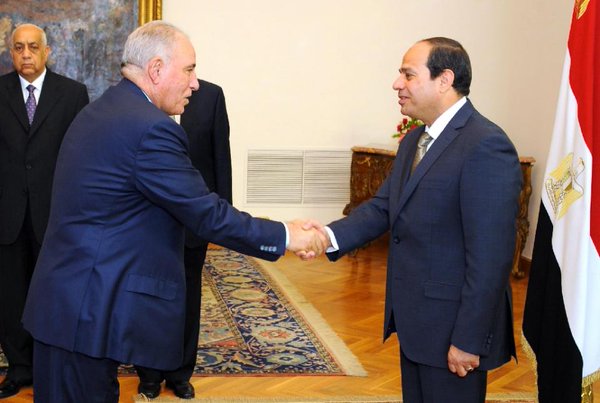 CAIRO -- Egypt's prime minister sacked Justice Minister Ahmed al-Zend on Sunday after he was criticized for saying he would jail Islam's Prophet Muhammad himself if he broke the law.

Zend's comments came in a televised interview on Friday. He immediately said "God forgive me," and on Saturday issued an apology in another interview. It was not immediately clear who would replace Zend, a hard-liner and outspoken critic of the Muslim Brotherhood.

Zend, a former appeals court judge, had been publicly outspoken in his criticism of the Islamist movement removed from power by the army in mid-2013 and banned as a terrorist group.

He has in the past denounced the 2011 revolt that ended Hosni Mubarak's 30-year rule and ushered in the election that brought the Muslim Brotherhood to power. He has also been a strong defender of the judiciary and its powerful position.

Egyptian judges issued a statement opposing Zend's removal over what the head of the Judges Club told Reuters was a slip of the tongue that could have happened to anyone.

Showing crackdown scope, Egypt justice minister would arrest even the Prophet. Then is fired https://t.co/VpQj7NqiFe pic.twitter.com/lDNO5j6S9Y

"Egypt's judges are sorry that someone who defended Egypt and its people, judiciary and nation in the face of the terrorist organization that wanted to bring it down should be punished in this way," said Abdallah Fathi.

Egyptian courts have been absolving Mubarak-era officials, while imposing long sentences on liberal and Islamist activists.

Egypt's judiciary has faced criticism from rights groups in the past two years after judges issued mass death sentences against Muslim Brotherhood supporters, locking up youth activists and sentencing writers and journalists.

Zend's predecessor was also forced to resign last May after saying the son of a garbage collector was ineligible to serve as a judge.