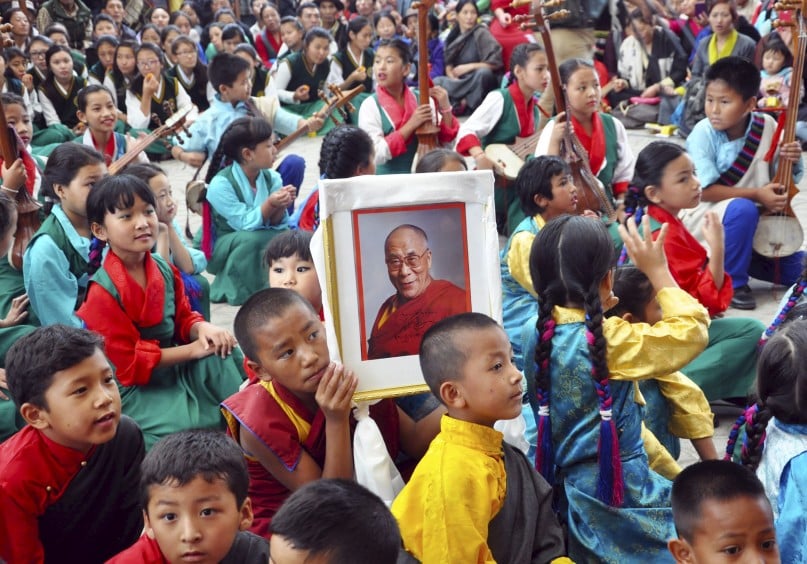 A young Tibetan monk holds a portrait of their spiritual leader, the Dalai Lama, during celebrations marking his 80th birthday anniversary in the hill town of Dharamsala, India, in this July 6, 2015 file photo. REUTERS Photo.

DHARAMSALA/NEW DELHI — Tens of thousands of exiled Tibetans across India and overseas will vote on Sunday to elect a political leader, hoping the democratic exercise will help sustain their struggle to secure complete autonomy for Chinese-ruled Tibet.

The second election of its kind follows a decision by the Dalai Lama, the 80-year-old Nobel Peace Laureate, to relinquish his political authority and vest it in a democratic system that could outlive him.

Concern about the globetrotting spiritual leader’s health, after his admission to a U.S. hospital this year for treatment, has reinforced the importance of the vote to keeping the issue of Tibet alive.

The “Sikyong,” or elected leader, will be solely responsible for political and diplomatic decisions, as the charismatic monk steps back from the limelight amid uncertainty over how his successor will be chosen.

Tibetan Buddhism holds that the soul of a senior lama is reincarnated in the body of a child after he dies. China says it must sign off on the reincarnation of the Dalai Lama, who fled into exile in 1959 after a failed uprising.

“Even if China tries to select the next Dalai Lama, the Tibetans will continue to have an elected leader who is outside the Communist Party’s grip,” said P.D. Mukherji, professor of Chinese studies at Jawaharlal Nehru University in New Delhi.

The contest will decide who leads the parliament of the Central Tibetan Administration (CTA) in Dharamsala, a town in India’s Himalayan foothills where a community of Tibetans lives in exile with the Dalai Lama.

Exiled Tibetans consider the CTA to be their legitimate government, but no country recognizes it. China has lobbied to sideline the Dalai Lama from the international circuit, although he did address an audience in Geneva last week despite those efforts.

The elected leader will have to rally global support for Tibet’s campaign for freedom, strengthen ties with India and discourage self-immolation by refugees when protesting against Beijing’s ironclad control of the Himalayan region.

This month, a Tibetan schoolboy died in India after setting himself on fire to protest against Chinese rule in Tibet.

Sangay and his opponent, Penpa Tsering, both favour the “middle way” propagated by the Dalai Lama for more than 50 years that advocates non-violence while seeking autonomy for Tibet.

Representatives of the Dalai Lama held several rounds of talks with China up to 2010, but formal dialogue stalled amid leadership changes in Beijing and a security crackdown in Tibet.

One candidate who called for independence from China lost in preliminary elections held in 2015, as voters felt that opposition to Beijing would only undercut international support for, and weaken the economic condition of, exiled Tibetans.

Asked to comment on the leadership election, Chinese foreign ministry spokesman Lu Kang said Beijing did not recognize the “so-called government in exile”.

“We hope that any country, especially those which want to have good relations with China, (does) not provide any convenience or platform to any so-called Tibet independence activities of anti-China separatists,” Lu told a news briefing.