It’s only May, and we already have plenty of developments in religion and politics. These aren’t necessarily the most important, but they are the ones that few saw coming this year.

1. Hillary Clinton is now most religious candidate for president

In a typical presidential contest, we could argue about which candidate is most religious. This year, it’s a no-brainer. Hillary Clinton is firmly rooted in the social justice tradition of the United Methodist Church. Bernie Sanders has been called “unabashedly irreligious,” and piety is not part of the Donald Trump brand.

Hat-tip to Jack Jenkins at ThinkProgress for picking up on this (you should read his full piece on Clinton’s faith). 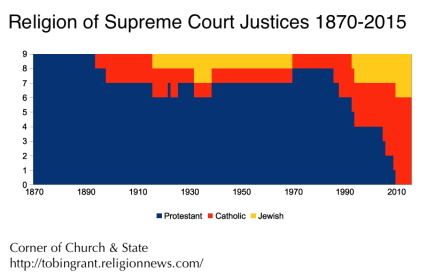 For the past six years, there have been no Protestants on the U.S. Supreme Court. Most of the justices are Catholic; the others are Jewish. This is far different than the historic religious composition of the court.

After Justice Antonin Scalia died earlier this year, President Obama nominated Merrick Garland. While it’s unlikely that Garland will be considered by the Senate this year, he would add an additional Jewish justice to the court. In the future, we may see the court’s first Hindu. U.S. Court of Appeals judge Sri Srinivasan has been on the short-list for the court and will likely be considered by other Democratic presidents.

3. Only one other WASP leader in the other branches

What do the Democratic and Republican leaders in Congress and the White House have in common? Only one is a white Protestant–Senate Majority Leader Mitch McConnell.

House Speaker Paul Ryan, Minority Leader Nancy Pelosi, and Vice President Joe Biden are Catholic. Senate Minority Leader Harry Reid is a Latter-Day Saint (aka Mormon). Obama attended a United Church of Christ congregation before running for president. According to a recent Pew report, “Today, Obama calls himself a Christian, but is not a regular churchgoer.” (No, he is not a Muslim)

4. Pro-life Democrats: From voting bloc to near-extinction in six years

As I reported earlier this week, there are now only two solidly pro-life Democrats in the U.S. House of Representatives. Just six years ago, there were forty. But after these Democrats voted for the Affordable Care Act, they have seen their numbers cut in half each election. Redistricting has also been a major factor in the decline. The result: partisanship and abortion positions are now indistinguishable.

Trump is big in India, at least among right-wing Hindus. A group of Hindu activists in New Dehli have been praying that Trump would win the election (video here).

Why? According to the Associated Press, the prayer and protest included the banner: “because he is hope for humanity against Islamic terror.”

The enemy of your enemy is your friend, and in this case, that enemy are Muslims.

The Washington Post reported on a new group in the U.S. that is small but getting attention: Hindus for Trump. According to the group’s Facebook and Twitter pages,

American Hindus are model citizens, educated and industrious. We want a responsible nation where Americans are both safe and free.

Their tweets include statements such as, “Keep Islam out of the USA!”

Islamaphobia aside, how Hindus for Trump’s image of the candidate meditating on red, white, and blue lotus flower? That’s the best image of American religion and politics this year.

In a story about a theological fight among some Muslims, the New York Times goofed. The correction speaks for itself:

Because of an editing error, an article on Monday about a theological battle being fought by Muslim imams and scholars in the West against the Islamic State misstated the Snapchat handle used by Suhaib Webb, one of Muslim leaders speaking out. It is imamsuhaibwebb, not Pimpin4Paradise786.