(RNS) Arsalan Iftikhar, a human rights lawyer and former NPR commentator, has written a new book, “Scapegoats: How Islamophobia Helps Our Enemies and Threatens Our Freedoms.” The quick read offers a summary of the phenomenon of Islamophobia, providing specific examples of common misconceptions and how they are spread.

With a foreword by best-selling author Reza Aslan and a blurb by former President Jimmy Carter, the book is receiving some buzz.

RNS talked with Iftikhar, who is now senior editor at The Islamic Monthly, about the book and some of the topics it touches on. The interview has been edited for length and clarity.

Q: “Scapegoats” explores the historical American phenomenon of groups — usually defined by religion or race — that have been the focus of public fears and resentments. What can American Muslims do to survive “their turn” at being scapegoats?

A: I think our best strategy is to create more allies. Any civil rights struggle in the United States was only able to succeed because of allies who did not fit the demographic mold of the people that were being scapegoated. When Jewish Americans stood side-by-side with Martin Luther King during his struggle for equality, that ally relationship helped the African-American civil rights struggle. When Muslims start to speak up against anti-Semitism, when Jewish people start to speak out against Islamophobia, when everybody starts to speak out against homophobia, that can really resonate with the American public. The American public expects to see Muslim public intellectuals like myself speak out against Islamophobia but they don’t expect to see white Christians or black Christians or white Jewish people doing the same. It’s really important for us to get allies from outside the community to speak out on our behalf because even though we might be the scapegoats of today it’s going to be somebody else tomorrow. 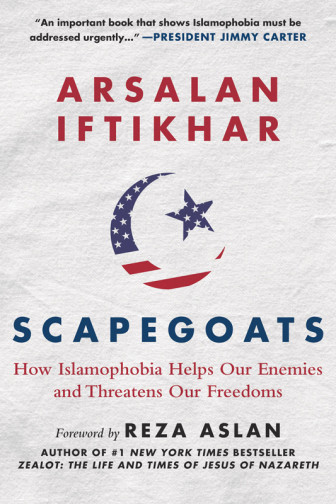 “Scapegoats: How Islamophobia Helps Our Enemies and Threatens Our Freedoms,” by Arsalan Iftikhar. Photo courtesy of Skyhorse Publishing

Q: In the book you write: “When a group of people are dehumanized by public rhetoric and turned into the proverbial other, we usually see the tragic societal consequences … ” How bad could modern-day consequences get?

A: Obviously hate crimes are the one key manifestation of demonization of any minority group. We have seen a lot of hate crimes since 9/11. Muslim kids are being bullied all over the country now. In California a young Muslim high school female student who wears the hijab — the headscarf — was labeled as “Isis Phillips” in her high school yearbook. And the high school chalked it up to being some sort of typographical error, which is absolute nonsense. This is the sort of normalization of Islamophobia that we’re seeing today. In a recent poll, nearly 70 percent of Republicans in many Southern states agree with (presumptive GOP presidential nominee Donald) Trump’s sentiment that we should ban Muslims. So he is a very loud mouthpiece for a wide cross section of America today.

Q: You say that crimes are more likely to be labeled as terrorism if Muslims are involved. Can you talk about the impact of that?

A: As I write in the book, the term terrorism has been sadly co-opted in the 21st century to only apply to brown Muslim men committing acts of mass murder. In 2015, there were over 350 mass shootings in the United States and less than 1 percent of them were committed by Muslims, but it was the one committed by Muslims in San Bernardino that was labeled an act of terrorism — even though a week before a deranged white man named Robert Dear walked into a Planned Parenthood clinic in Colorado Springs and killed people. But that was never called Christian terrorism or domestic terrorism. A few months earlier in Charleston, a 21-year-old white supremacist named Dylann Roof walked into an African-American church, sat in Bible study for an hour and then proceeded to slaughter nine innocent parishioners, including a South Carolina state senator. Now if a white male with a race war ideology committing a mass murder is not an act of terrorism, I don’t know what is.

The media play an important role in helping to define what terrorism is in our modern society. There is a sea of difference between the terms gunmen and terrorists. We live in a society today where the perception has become that terrorism can only be caused by olive-skinned males with foreign-sounding names.

Q: You write: “It is difficult to simply turn one’s cheek when one is struck in the face, whether literally or figuratively. … But that is what we must do, unless we want the world to descend any further into brutality and misery.” How do we achieve harmonious and peaceful relations among people of all faith backgrounds?

A: I want to live in a world where religion and faith are only used for good. Regardless of your religious tradition, or lack thereof, I want us to be able to live in an ethos where we can disagree without being disagreeable, where we can respect the diversity of opinion, diversity of backgrounds, within our respective societies, without feeling the need to exert our own personal values or belief systems onto other people. The only way to do that is through having constant dialogue, getting to know one another at the local grass-roots level, having Muslims reach out to their friends and neighbors and colleagues. As a human rights lawyer I always tell people that it is very hard to demonize people once they’ve been humanized.

The recent election of Sadiq Khan as London’s first Muslim mayor was really significant. It serves as a message of hope to our Muslim youth that no matter what is going on in society today or what we see on 24/7 cable news networks, as long as you put your mind to bettering yourself and bettering those around you, you can actually make positive contributions to the world that we live in today.

(Ruth Nasrullah is an RNS correspondent based in Houston)