Last night I attended a panel featuring James Obergefell, the plaintiff whose case, Obergefell v. Hodges, resulted in same-sex marriage becoming legal in all fifty states on June 26, 2015, almost exactly one year ago. 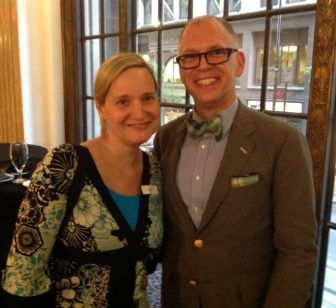 The Supreme Court decision marked a major shift in the nation—one that was welcomed by many, myself included, as evidenced by this jubilant post I wrote in the immediate aftermath.

Last night I was thrilled to get to meet some of the people who helped bring about this change in our nation’s history.

But others were not thrilled with the 2015 ruling, including some senior leaders of the Church of Jesus Christ of Latter-day Saints, of which I am a proud member.

Within hours, the Church had released its official statement “Supreme Court Decision Will Not Alter Doctrine on Marriage,” expressing its disapproval of the ruling. Nothing unexpected there.

What was shocking was the (botched/leaked) disclosure in early November that the Church would be doubling down on same-sex families: no longer could children of such families be baptized; adult children of such families would have to “renounce” their parents’ marriages upon reaching the age of 18 if they wanted to get baptized and serve a mission; and any partners involved in a same-sex marriage were automatically to be considered apostates.

Then in January, apostle Russell M. Nelson upped the ante by relabeling the policy change a revelation, claiming that because the Brethren were so deeply concerned about the nation’s direction with Obergefell, they had met “repeatedly in the temple” to get a revelation from the Lord.

The result, Nelson suggested, was this policy of exclusion.

As I said at the time, I do not accept this misguided policy as divine revelation (and frankly, given the bizarre way it was handled—by a handbook committee—Elder Nelson’s interpretation of all the Brethren being in agreement about it as a revelation confirmed by the Lord in the temple is rather hard to swallow).

But in retrospect, the Church’s behavior in digging in its heels in response to advances in same-sex marriage equality should not have surprised me so much.

This isn’t even the first time it has happened. In his new article “Eve and the Construction of Mormon Gender Identity,” Boyd J. Petersen notes that the 1995 Proclamation on the Family statement “was released soon after the LDS Church had been denied standing by the Hawaiian Supreme Court in Baehr v. Miike, the first gay marriage case in the United States.”

The timing, Petersen says, was likely not a coincidence: Church leaders were alarmed by what was happening in Hawaii. “The Family: A Proclamation to the World” was its gauntlet thrown.

What’s interesting, and sad, about the Proclamation is the way it needlessly overreached. To firmly state its position on one perceived problem—same-sex marriage—the Church created theological conundra that have had lingering repercussions for two decades now:

So far, what we’ve seen is not good. There’s been a tragic increase in LGBT Mormon youth committing or talking about suicide. Just this week—the first anniversary of Obergefell and a week marked with Pride marches around the country—I have heard of two such suicides just in Utah.

The nation takes a step forward, and the Mormons take a step back. And since November it hasn’t stopped breaking my heart.

Religion Hub
Asexual Latter-day Saints face an added dilemma: Finding their place in a tradition focused on marriage
Follow us on Facebook!
Submit your photos to RNS