Last month, my Q&A with author Carol Lynn Pearson about “eternal polygamy” clearly touched a nerve. I was glad to see the many conversations about it on the blog and on social media. On Facebook, I heard the personal story of my friend Tracy, and I invited her to recount it here. It’s brave of her to write about it. — JKR 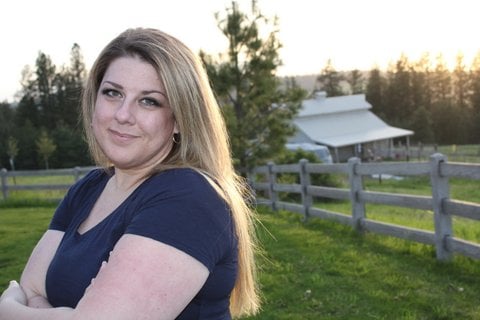 While plural marriage has officially been banned by the LDS Church for more than a hundred years, the truth and lived reality for many modern Mormon women is actually far more complicated.  I am one of those women.

For Mormons, one of the major goals in life—something our children are taught from the time they enter the Sunday School at 3 years old—is to strive for a temple marriage, or sealing.  To Mormons, a sealing is much more than a fancy ceremony in one of our pretty temples; it is a marriage “for time and all eternity” and does not end at death. The participants are considered married, or sealed, forever.

So what happens when someone divorces? Or dies? Or doesn’t want to be sealed to someone else anymore?

I joined the LDS Church as an adult convert, already a wife and mother. My first marriage ended in a sad divorce several years later, and I found myself with three young kids, alone, and wondering about my place in our eternally-focused church. I asked my local leaders about the possibility of my children being sealed to me; I had been through the temple, but my former husband and I had never been sealed and my children were not born in the Covenant.

My leaders were very kind and cared for us, but they had to inform me it was impossible for me as a worthy, single person to have my children sealed to me. In these painful conversations, I was assured again and again that a loving God would work these things out, and I should not worry about the details. Sitting through the many talks and lessons on the eternal family in church became trials of endurance and patience, peppered with sorrow and frustration. I doubt the average member realizes how often we focus on sealed families.

After several years, I met and married a wonderful LDS man. In order to include our combined children, we opted to have a civil ceremony performed by our bishop in our ward chapel, and planned to apply for sealing clearance after the requisite year-long waiting period. We both felt comfortable with this, our bishop was very supportive, and we moved forward.

We had assumed my husband would request a cancelation of his sealing to his first wife. We had read that a cancelation would not affect his children from that marriage, as no blessings would be denied them. Since I had never been sealed, I did not need a cancelation.

Then it got surprising.

The church does not routinely grant men cancelations. Women must get a cancelation, but living Mormon men can be—and routinely are—sealed to more than one living woman.  Today. In 2016.

After a death or a divorce in a sealed marriage, the sealing remains intact. This is surely a great comfort to someone separated from a beloved spouse by death.

But what about in a divorce? After a civil divorce, nothing changes in the temple sealing. The participants are divorced by the laws of the state, but they are still sealed for “time and all eternity” according to the laws of the Church. The sealing remains intact, and both people are still bound forever.

And here’s a shocker: If she and husband #2 have children, those children will be born within “the covenant” and sealed by birth to husband #1—even though they are no relation at all to husband #1. It’s easy to see why this would be very distressing to women of faith who are facing this possibility.

It actually gets worse.

If a civilly-divorced, sealed man wants to get remarried, and his new spouse is a member of the church, he petitions for a “clearance” to be sealed to his new wife— but his first sealing is not cancelled. It’s a lengthy process, in which the opinion of the first wife is requested (per the Law of Sarah). The man can request a cancelation of his first sealing, but unless the first wife is getting remarried in the temple, that request is almost always denied.

The living man, after being granted clearance, can then be sealed to a second living woman in the temple.  He is legally married to only one woman, but on the records of the church, he is then sealed to two (or more) living women. Any children from either sealing are “born in the covenant” with him, and are sealed to him.

It dawned on us that despite my husband’s explicit wishes and request, he would continue to be sealed to his first, living wife. If he wanted to be sealed to me, his actual legal wife, I would have to agree to be part of a polygamous family for eternity.

What does this mean for modern Mormons?  It means modern, living men are sealed to multiple living women.  Full stop.

This opens up many complicated questions.

Why are members of the church who request cancelation denied? Women who are single and ask about sealing are regularly assured not to worry, which would suggest that sealing is not imperative. Yet men and women who request cancelation are being told sealing is important enough that their agency will be denied and they will be forced to remain sealed to former spouses they no longer want or love—and in some cases, even after they are married to another.

So which is it? Is it the most important thing we do? Is it so indispensable that our agency—paramount in Mormon theology—is denied? Or is it no big deal, and we should stop making a fuss and let God work it out after we die?

It cannot be both. It cannot be the most important thing we do, and also no big deal, depending on the audience being addressed.

What is sealing, and what is it not?  Is sealing a definitively separate thing than a marriage? If so, defining the importance and separateness of those relations would be crucial to further understanding for people of faith.

We have prophets, seers and revelators at the helm of our church. It’s entirely reasonable to ask these questions of our spiritual leaders. When we ask for cancelations and are denied without explanation, our church leaders leave us practicing a theology we profess to have given up more than a century ago. We seek their counsel, but the silence in reply is deafening.

Tracy McKay-Lamb is an adult convert to the LDS Church, living in the DC Metro area with her husband, children, and enormous dog. She writes for the blog By Common Consent and for herself.