BLACK ROCK CITY, Nev. (USA Today) A solemn and nearly silent audience of thousands watched the final formal act of Burning Man 2016 as the Temple burned to the ground.

Sunday evening’s Temple burn stood in stark contrast to the Saturday burning of the Man himself, whose journey was started with fireworks and explosions. Sunday night as dark fell, Burning Man workers silently lit the 80-foot-high wooden Temple, which was packed with both extra wood and memories.

As is tradition, Burners all week have been leaving notes, letters and even the ashes of loved ones inside the Temple in preparation for the burn under a crescent moon.

Workers built the ornate temple on site from scrap wood they hauled in, and volunteers will later sift through and remove the debris. Returning the desert to its pristine condition is a key condition of the federal permit under which Burning Man operates.

About 70,000 people built and occupied a temporary city in the desert about two hours north of Reno. The Temple burn on Sunday was the final formal event of the week, although it officially ends Monday.

As the temple collapsed into itself and the flames began to die, an eerie howl rose from the thousands of people watching — and then silence returned.

Then, a man deep in the crowd began yelling: “Feel the burn, baby. Do you feel the burn?”

Another Burner added: “Why does drunk uncle always have to show up?” to muted giggles.

Silence again returned until a drone flew overhead, breaking the tension, and the crowd began to silently drift back to the encampment.

Thousands of people began driving away from the encampment site Sunday evening, but the resulting traffic jam by 10 p.m. was so bad that Burning Man officials were forced to temporarily close the access road across the desert. Before the closure, drivers were waiting up to six hours in their vehicles to travel less than 10 miles to the nearest road.

The departure surge is known as Exodus. 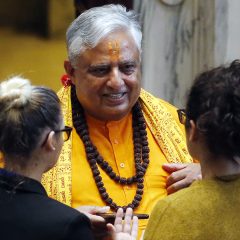 News
Hindu guest chaplain, at your service — but does he speak for all Hindus? 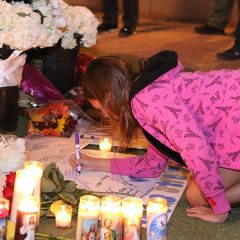 News
In Las Vegas as before, spontaneous shrines bring healing after horror