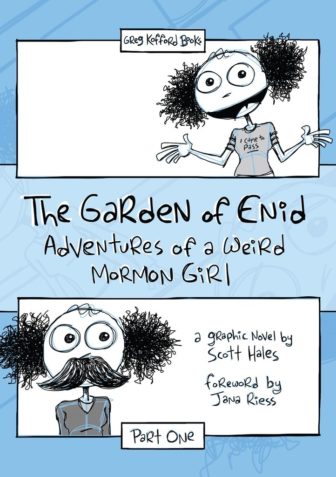 Some of you may remember that a couple of years ago, I interviewed Scott Hales, the creator of my favorite Mormon comic, The Garden of Enid. The 15-year-old title character is a “weird Mormon girl” with no shortage of questions.

Now it’s all gathered together in graphic novel form in two volumes, so if you arrived late to this party (or, heaven forbid, missed it altogether), you can catch up in one sitting.

RNS: What made you want to pull Enid’s story together into a graphic novel?

Scott Hales: I think the last time we talked [May 2014], the webcomic was still in its early stages. After I finished the first year of Enid comics and announced that I wasn’t going to post them regularly anymore, I had people ask me when I was going to publish the existing comics and maybe write some new ones. This was something I wanted to do, but I wasn’t quite sure where to find a publisher. There’s not a huge market out there for Mormon comics or Mormon literature.

At the Mormon History Association meeting last summer, I talked with Blair Hodges, and he’s a big Enid fan. He recommended that I talk to Greg Kofford Books, so I went over to their table and talked to Brian Whitney and Loyd Ericson. They were both really excited about the idea, and it just took off from there. I sent Loyd the comics, and he and I discussed how to do the book. 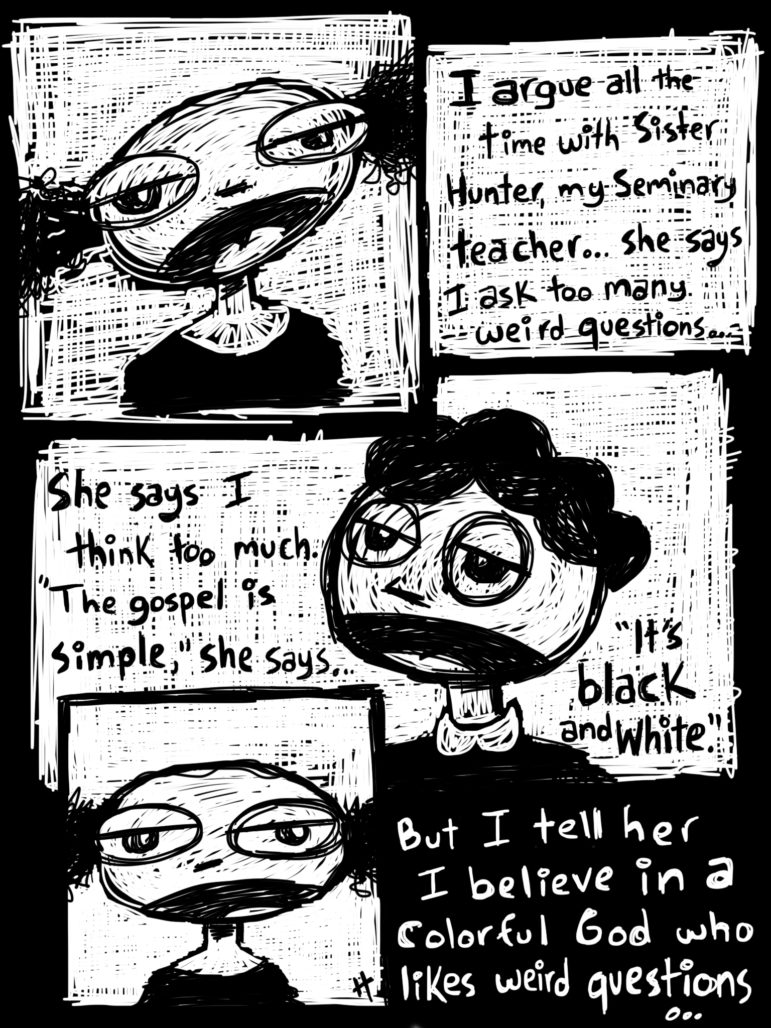 RNS: You’ve added some commentary and behind-the-scenes info that wasn’t part of the original comic.

Hales: I worried that readers would not be interested in the book since most of the comics were already available online. I wanted to give them something in addition to the comics, not only as an incentive to get the book, but also to provide a kind of meta-text that gave insight into the creation of Enid and her story as well as my thoughts about the comics and the issues they address.

RNS: Did you change anything?

Hales: I went back and changed more in part 1 than in part 2. The webcomic was my way of getting back into cartooning after not drawing much since high school, so my early comics were kind of rough. As you read the two volumes, you can kind of see me getting better over time. Most of the changes had to do with lettering, which needed to be redone for clarity. I also included some new comics to add depth to the story—maybe four or five in part 1 that develop Enid’s social anxiety and her struggle to find friends. I also added comics to flesh out her faith crisis in part 2.

I also saw that Enid’s earlier humor was not that great, so I changed some of the language. I didn’t tone down the character’s irreverence, but I did make her a little bit kinder to her mother.

RNS: Speaking of Enid’s mother, re-reading those last comics was really emotional for me. I’m not sure I’ve quite forgiven you for Enid’s mom.

Hales: Yeah, that was a really jerky thing for me to do. I remember when I posted the comic, my second-oldest daughter came down – she always wants to read my comics as soon as I finish them – and I said, “OK, you can read it, but I have to warn you that Enid’s mom dies.” And she just broke down.

I knew there was this conflict between Enid and her mother that I had to resolve somehow. I felt like it was important for Enid to lose something important to her before she learns to appreciate it. The loss becomes crucial to her growth as a character. After that experience, she finds herself remembering things about her mother that she had forgotten or taken for granted, and she starts to see her mother as more of a person. It helps her appreciate more the other relationships she has formed in the series. 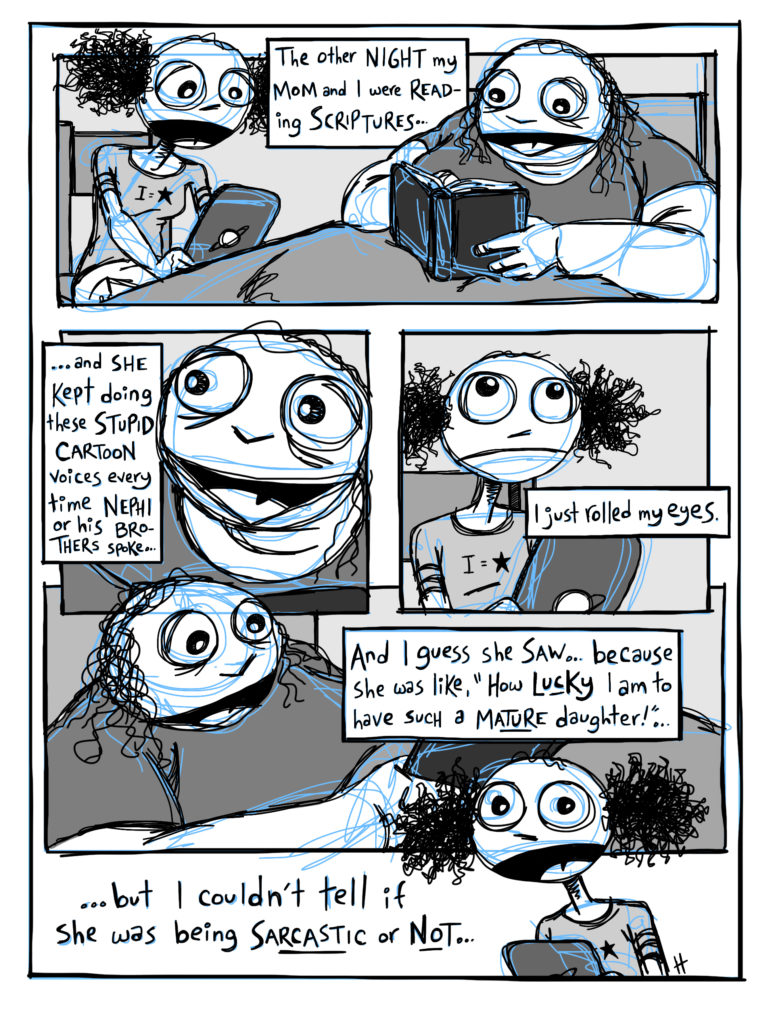 RNS: Have you put out any new Enid comics recently?

Hales: There was a while when I was doing a kind of Enid mini-series, but I ended it to focus on another long-form comic, which is a spinoff of The Garden of Enid. It’s about her first kiss, Wyler. It’s basically his journey to EFY. So it’s similar in some ways to Enid, in that it reads like a teenage Mormon’s journal, but it’s weird in different ways.

When I finish Wyler’s story, which has not been nearly as popular as Enid’s, I’d like to go back to The Garden of Enid. Enid is about 18 years old now, and that’s another awkward time in a person’s life. At the end of part 2, we learn that she has half-siblings, and I think it might be interesting to explore her relationship with them, or at least one of them.

RNS: One of the things I love most about the comic is the way that Enid’s ward members all pitch in to take care of her, both before and after she loses her mom. She may not agree with them on issues, but she knows they love her.

Hales: It was important for me that with Enid we see a ward at its best, that can take a kid who is weird and welcome her and really take her in. There are some times when her ward falls short, but by and large, its members help to fill the voids in Enid’s life, and do their best to love her as she is. I want readers to be able to see what’s possible, and do their best to reach out to the Enids in their wards and be the kind of people that weird Mormon kids need.

RNS: I’m glad to know that you haven’t closed the door on there being more of Enid’s story. Will she still be weird?

Hales: Oh yeah. That sort of thing doesn’t go away. She may be weird in a different sense, but she’ll always be weird.

To hear more about Enid, listen to Scott Hales on podcasts here and here.

Read more about the Mormon arts: