Mormonism has done a great job of making “families are forever” its catch phrase. It’s one of the ways the church has been successful in transitioning from the days of “crazy polygamists” to our more squeaky clean, Mitt Romney, Donnie and Marie, “I’m a Mormon,” kinder, gentler modern Mormonism.

But is it a promise or a threat?

I’ve explained to countless non-Mormons that we don’t believe that abusive parents will be with their children in the afterlife. We don’t believe that men who abuse wives will be able to force them to stay with them in the celestial kingdom. Are we walking the walk on this or not?

Yes, I know all the caveats that if these spirits don’t want to be together, they can reject the work. But does this mean that if one child is worthy and wants to join Mormonism from beyond the grave, they have a choice beyond accepting any family sealings that are performed on their behalf? That is, what if they don’t want to be with that family, but with another family?

I’m not sure I see any way within current Mormon doctrine to get around this, other than saying that we believe people will be different when they are resurrected (which is directly contrary to what The Book of Mormon says in Alma 40-41 about us being resurrected to evil if we are evil). Repenting of sins is one thing, but becoming a different person entirely is something else. If you’ve spent your life as an abuser or are just selfish, there’s no guarantee you will suddenly become someone else, repentance or not.

2. We as a church are still doing a lot of things that look like we care more about checking boxes so that everyone is sealed to someone than we care about them being sealed to those they consider their loving family in this life.

I’ve watched as the church makes it difficult for those who have been in terrible marriages to get an official cancellation of sealings to enable them to cut ties from an abusive former spouse and to formalize the new relationship with a loving step-parent.

3. The promise of being together forever in the celestial kingdom is sometimes used as a tool to bludgeon those whose ties to the church have become more tenuous or who have left it completely.

Parents feel distraught that their children are either unworthy or unwilling to be with them in Mormon heaven and pressure them to continue in the church for the sake of the family, or don’t know how to maintain a relationship that isn’t based on coercion or manipulation to return to church activity.

If every one of your contacts with your parents is them offering you a conference talk, a copy of a new book by a General Authority, or a scripture and a promise to “pray for you,” it can feel like the idea of an eternal family is nothing good. If we focused a little less on eternal family relationships and a little more on making them the best we can in this life, we might be closer to the right path.

4. My family isn’t just my husband and my children.

Blood relationships are only one way of creating family, and while the church is good about formal adoptions, I wish we extended our sealing ordinances beyond that. Increasingly as I grow older, my idea of “family” extends to deep friend relationships.

It used to be that those kinds of relationships were recognized in the temple through adoption sealings, at least for men who were “adopted” by other men in the church with more authority. Brigham Young was sealed by this law of adoption into Joseph Smith’s family; and early in 1846, he was sealed by adoption to 38 young men in the Nauvoo Temple. Likewise, Wilford Woodruff was sealed to 96 men between 1843 and 1896. I wish that we could find some way to do that now. It could really be wonderful to give and receive promises of love from some of my dear friends who have been with me through thick and thin.

“Families are forever” is a concept that I think could use some updating and some reinterpretation. I love my family, but how I want them tied to me may be different than the way it used to be. As my own children work out their relationship to the church and their own belief in God, I’d like them to feel that being together is something I want them to look forward to—not fear.

Mette Harrison is an acclaimed novelist and regular guest columnist at RNS. Visit her website as www.metteivieharrison.com.

RELATED POSTS ON MORMONISM AND THE TEMPLE: 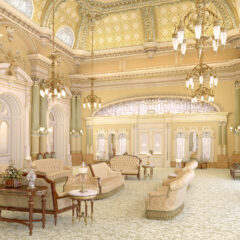 Flunking Sainthood
LDS Church to make changes to temple clothing
Follow us on Facebook!
Submit your photos to RNS