EDITOR’S NOTE: This column originally appeared in Sightings, a publication of the Martin Marty Center at the University of Chicago Divinity School. Sign up here to get Sightings in your inbox on Mondays and Thursdays.

Recovering, as many of us will and must, from massive doses of Lutherana—after media, scholars, and the pious both among them and beyond their range are doing following October 31 observances—we at Sightings do our scanning of headlines, twisting of dials, and conversing with kindred souls in order to locate and study new topics. One article, dated October 31 (“Reformation Day”), piqued interest: “Is Reformed theology for black people?” asked Jemar Tisby for Religion News Service, and the question he posed stays with us. Historically, black people have not found the Reformed—a.k.a. Calvinists—to regard them positively, we read and already knew; some, indeed, were slaveholders. But now, surprise! “The rise of Christian hip-hop has played a role in a recent surge of interest in Reformed theology among African-Americans,” a fact Tisby documents.

I, for one among many, welcome the shift of emphasis in November, as I keep tracing my own roots and identity. The Marti people were from tiny Lyss, Switzerland, where everyone is still Reformed (or unchurched). Some Lyssians were converted by Mormon missionaries, later to settle, and succeed, in Utah, including a few CEOs and former governor Norman H. Bangerter. Am I Lutheran because some among the Lyss émigré group linked with immigrant fellow evangelicals—which is what Lutherans and Reformed called themselves—and pioneered in Nebraska? Do I “do” Luther because of an accidental—the Reformed would call it a “directional”—shift? (They might even prefer “providential” or “predestined.”) I mention this so readers may identify me as “mixed up,” now tracing Reformed roots which were partly covered over by German stock. Both camps were Evangelisch, so we should be numbered with the “evangelicals,” who, nevertheless, often disagreed with each other.

The anti-Luther folk bring up that reformer’s horrible record of anti-Judaism, the scourging of “radicals” in the Peasants’ War, and his tit-for-tat polemics with “papists,” in conflicts which a certain poet would have called “old, unhappy, far-off things, / And battles long ago.” The anti-Reformed, on signal, start off by dismissing John Calvin for having been responsible for the burning-at-the-stake of Spanish polymath Michael Servetus, a “Unitarian.” Fundamentalists and other Protestant policers point out that Calvin, like Luther, did not repent of his own lethal activities. Calvinism lived on in Switzerland, the Netherlands, and England, and became the dominant shaper of most colonial American church, and often civic, life.

Both wings of the Protestant Reformation produced heirs with complex histories, and mixed expressions, including participation in and execution of murderous conflicts such as the Thirty Years’ War. Their descendants, as among “mainline Protestants,” did and do repent of the ancestral ways. For them, as for philosopher Max Scheler, “repent” meant and means a “change of heart” and action. The best of the Calvinist reforms have been productive in civil affairs, social welfare activities, and the shaping of communal life. A Wall Street Journal reviewer, Barton Swain, faulted a contemporary critic of Calvin and the early Protestants for his overreach in criticism and his undergrasp of the positive goods that Calvin and his colleagues and heirs brought.

Biographers generally have less interest in Calvin than in Luther, whose quest for grace left him writhing through webs of spiritual agonies until grace came. Calvin, almost as productive a writer as Luther, did not need volumes, as Luther did, to account for the change from his Roman Catholic past to his evangelical future. He used only two words in Latin, translated: “sudden conversion.” Still, he was a towering genius whose influence, for better and for worse, remains with us. Like millions of other heirs of the Reformation, my kind will never get bored—certainly not when “sudden” conversions and achievements make and leave their mark. 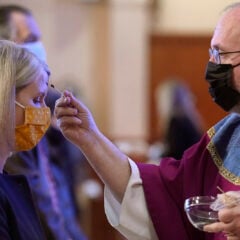 News
Campaign posters in ‘Luther country’ raise specter of anti-Semitism
Follow us on Facebook!
Submit your photos to RNS