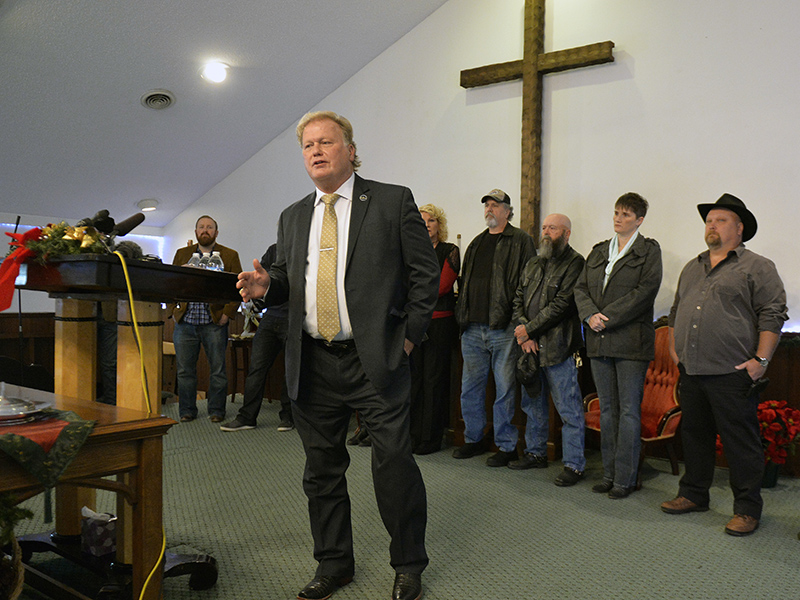 With friends and family standing behind him, Kentucky state Rep. Dan Johnson addresses the public from his church on Dec. 12, 2017, regarding allegations that he sexually abused a teenager after a New Year's party in 2013, in Louisville, Ky. Johnson said a woman's claim that he sexually assaulted her in 2013 has no merit and he will not resign. (AP Photo/Timothy D. Easley) (Caption amended by RNS)
December 18, 2017
Yonat Shimron

LOUISVILLE, Ky. (AP) — Leather-jacketed motorcycle riders revved their bikes in their own tribute as they joined a large throng of family and friends who remembered a Kentucky lawmaker who killed himself a day after vehemently denying accusations of sexually assaulting a teenage girl.

Family and friends of Dan Johnson gathered for his funeral Monday (Dec. 18) at Heart of Fire church — where he had preached and took a public stand against allegations of sexual misconduct years earlier.

The day after he denied the allegations at a news conference, the 57-year-old Republican lawmaker's body was found along a secluded road with what Bullitt County Coroner Dave Billings said was a self-inflicted gunshot wound to the head.

On Monday, the crowd was so large at the funeral that a lawmaker who shared an office with Johnson at the state Capitol in Frankfort was unable to get into the small, stone church.

Afterward, mourners filed out as a cold, light rain fell.

Johnson's church prided itself on welcoming "real people." David Adams, a political operative who worked with Johnson on his campaign, had called it a "biker church" with "lots of leather jackets, lots of long hair and people that if you ran into them on the street, you might have a different first impression."

Many of those bikers came to pay tribute to Johnson Monday. They revved their bike engines after the ceremony and joined the procession following the lawmaker's body to a cemetery.

The only media outlet apparently allowed into the service was WDRB-TV. WDRB reported that the service began with singing and Johnson's son, Judah, was the first to speak to the crowd.

"Anyone that knew my dad knew that he was about freedom and being free from the power of sin and death and all the above, and that being the case, this is a celebration," he said.

A pastor and friend of the lawmaker, R.Z. Miller, told reporters afterward that "the spirt of the Lord was there."

Miller said that Johnson's children took part in the service, and said: "They showed the world what really was being taught in their home, and that was a love of God."

Johnson was elected to the Kentucky House of Representatives in 2016 amid a wave of Republican victories that gave the GOP control of the chamber for the first time in nearly a century. During the campaign, he defied calls from Republican leaders for him to drop out of the race after media reported on some of Johnson's Facebook posts comparing Barack and Michelle Obama to monkeys.

As a freshman legislator, Johnson sponsored bills having to do with religious liberty and teaching the Bible in public schools, but he was mostly out of the spotlight.

That ended a week ago when the Kentucky Center for Investigative Reporting published an account from a woman who said Johnson sexually assaulted her in the basement of the church fellowship hall in 2013. Police investigated the incident but closed the case and did not file charges.

Johnson termed the allegations as "totally false" from the pulpit of his church last Tuesday. The self-appointed "pope" of his church led friends and family in singing a Christmas carol, and told reporters he would run for another House term in 2018.

But the next day, Johnson posted a Facebook message that asked people to care for his wife, Rebecca. He wrote that PTSD "is a sickness that will take my life, I cannot handle it any longer. It has won this life, BUT HEAVEN IS MY HOME."

The sexual assault accusations against Johnson came amid a sexual harassment scandal involving four other Republican lawmakers in Kentucky. Former Republican House Speaker Jeff Hoover resigned his leadership position Nov. 5 after acknowledging he secretly settled a sexual harassment claim with a member of his staff. Three other lawmakers were involved in the settlement, and all lost their committee chairmanships.
___
This version of the story corrects the location of the alleged sexual assault to the basement of the church fellowship hall.
___
Associated Press Writer Rebecca Reynolds Yonker in Louisville contributed to this report.