(RNS) — Next time somebody tells you most journalists churn out “fake news,” remember Daphne Caruana Galizia.

Carauna Galizia, 53, relentlessly exposed corruption for decades as an investigative reporter on the European island nation of Malta. In her news stories, editorials and later her hard-hitting blog (which attracted more readers than Malta’s newspapers) she reported on government scandals, shined light on shady business deals and called out officials involved in illegal profiteering and cronyism.

“I can’t bear to see people like that rewarded,” she wrote. So she made it her mission to see that they weren’t.

She also made dangerous enemies. In 1995, someone set fire to her front door. Her dog’s throat was cut. She went into hiding with her family for a time, but eventually returned to reporting. More threats came in the years that followed, along with numerous accusations of slander, lawsuits and attacks from angry politicians. Nothing deterred her.

Her final blog, posted last Oct. 16, warned, “There are crooks everywhere you look now. The situation is desperate.”

Less than an hour later, a powerful bomb planted under the car she was driving blew it off the road. The police spent four days picking up pieces of wreckage and body parts.

Sometimes skepticism curdles into cynicism. And bias is a part of human nature. But neither cynicism nor bias excuse the current attack on a free press that has gained shameful support in the United States and other supposedly free countries.— Erich Bridges

Christ said, “(Y)ou will know the truth, and the truth will make you free.” (John 8:38, New American Standard Bible) He was speaking of ultimate Truth — his identity as Lord and Savior and his power to save us and set us free from sin. But the search for everyday truth is a noble calling. Journalists who do their jobs with integrity live — and sometimes die — in pursuit of that calling.

Not all reporters are as heroic as Caruana Galizia, of course. Many cover mundane beats that involve attending local government meetings, calling sources for quotes, searching musty records, checking facts, arguing with impatient editors. They work long hours, deal with endless deadlines and don’t make much money. Newspapers, struggling for survival in the digital age, continue to lay off reporters.

And though most journalists do their best to find the facts and report them straight, some are lazy or biased — or both.

As a Christian and a conservative, I’ve complained for years about liberal and anti-religious bias in the U.S. media. But bias has been a reality in journalism since its rowdy early days, when most newspapers existed to support one political party and attack the others as scoundrels. Modern news media are more independent. Reporters are trained to be skeptical of what they are told by politicians, PR types and everybody else — and experience often proves their skepticism to be well-founded.

“If your mother tells you she loves you,” growled the hard-bitten, cigar-chewing newspaper editors of old, “check it out.”

Sometimes skepticism curdles into cynicism. And bias is a part of human nature. But neither cynicism nor bias excuse the current attack on a free press that has gained shameful support in the United States and other supposedly free countries. You expect it in dictatorships and communist nations. But in America?

We can’t even seem to agree on a shared set of facts anymore.

President Trump, who isn’t exactly known for accuracy, brands news stories — or news organizations — he doesn’t like as “fake news.” He has vilified the press almost daily since he began his campaign. His “Fake News Awards,” posted Jan. 17, featured some of his favorite targets: CNN, The New York Times and The Washington Post.

Most of the “award”-winning stories had already been corrected by the journalists or news organizations that ran them; one had resulted in three journalists resigning under pressure. That’s accountability. Trump, meanwhile, has yet to admit or correct the hundreds of falsehoods and distortions he has spoken or tweeted since his inauguration.

Do the relentless accusations against the press influence impressionable minds? A 19-year-old Michigan man was arrested for calling the CNN Center in Atlanta 22 times on Jan. 9 and 10, berating the network for pushing “fake news” and promising that he was “coming to gun you all down.”

“Fake news” is an actual phenomenon, to be sure, and an increasingly dangerous one. But most of it is generated by foreign governments, domestic politicians and phony “news” operations with agendas to push and axes to grind. Russia, for instance, has employed sophisticated disinformation campaigns against the West since early Soviet times.

There’s a fundamental difference, however, between a biased or inaccurate story from a legitimate news source and “fake news.” The first is a failure of journalistic professionalism and fair game for criticism and correction; the second is an outright lie perpetrated to manipulate the public.

Meanwhile, at least 81 reporters were killed worldwide while doing their jobs in 2017, according to the International Federation of Journalists. More than 250 were jailed — at least 21 of whom reportedly were charged with reporting “fake news.”

The phrase itself, in other words, seems to be making it easier for despots and oppressive regimes to target journalists for attempting to tell the truth.

At least one politician got it right. Thomas Jefferson said, “Were it left to me to decide whether we should have a government without newspapers, or newspapers without a government, I should not hesitate a moment to prefer the latter.”

We need both. Government isn’t going anywhere, but a vital and free press could die in our time — whether from attacks or neglect. It’s up to us as informed citizens to make sure that doesn’t happen by allowing journalists to do their job.

Our freedom depends on it.

(Erich Bridges, a former global correspondent for the Southern Baptist International Mission Board, covered religious, political and social events and issues in some 40 countries as a reporter, editor and columnist for Baptist Press, The Commission magazine and other media. This views expressed in this opinion piece do not necessarily reflect those of Religion News Service.) 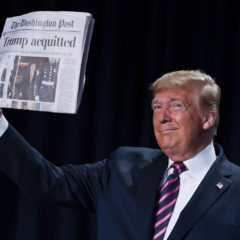 Christianity
Tony Evans: On his new Bible and commentary, Kirk Franklin boycott, wife’s health
Follow us on Facebook!
Submit your photos to RNS