(RNS) — For most people April 19 is just another springtime day on the calendar: the baseball season is well underway, it’s often the date for the Boston Marathon, and the cherry blossoms in Washington, D.C., are usually just past their peak.

But April 19 is deeply embedded within my personal memory bank.

On that date 75 years ago, in 1943, I was a youngster traveling with my family from Alexandria, Va., to Pittsburgh to participate in a Passover seder at my grandparents’ home located in what was then rightly called “The Steel City.”

It was the midst of World War II, and my father, a U.S. Army major, was stationed at Fort Belvoir. He had carefully accumulated enough rationing coupons to provide sufficient gasoline for the round trip in our 1940 Chrysler.

Once we neared Pittsburgh on the Pennsylvania Turnpike, the entire western horizon was glowing reddish-orange in color.

The flaming sky meant the world-famous Pittsburgh mills were producing steel around the clock for America’s war effort, contributing an estimated 95 million tons that were needed to defeat Nazi Germany, Fascist Italy and militaristic Japan. 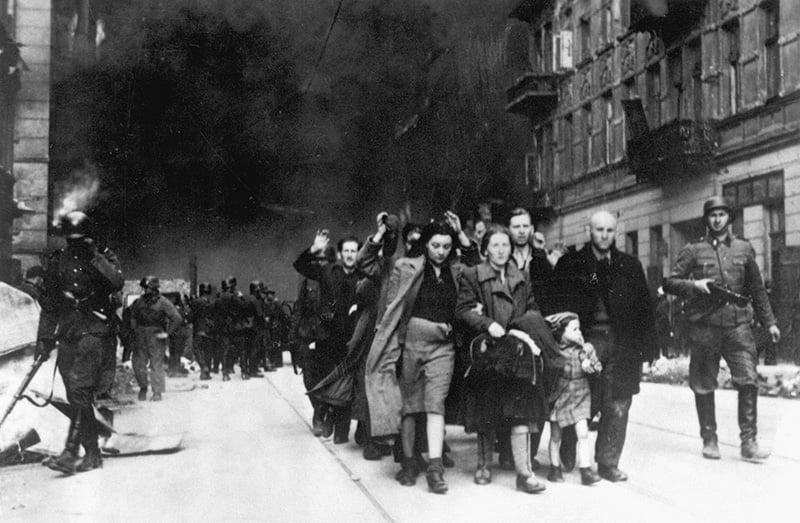 Jewish civilians are led by German Nazi troops to the assembly point for deportation. Picture taken at Nowolipie Street, near the intersection with Smocza Street, during the Warsaw Ghetto Uprising in April 1943. Housing blocks burn in the background. Photo courtesy of Creative Commons

In addition to my father, nearly every male over the age of 18 in our family was in the armed forces and served in such places as Iwo Jima, the Kasserine Pass in Tunisia (one of my uncles was wounded there in the February 1943 battle with the Germans), Iceland, France, Belgium, Germany, and Czechoslovakia. But my family was not unique; millions of other American families were separated from all or most of their adult men.

I lived in total safety in the United States during the war, but other Jewish children my age, born not in Pittsburgh but in Europe, were trapped in Nazi-occupied countries. Their terrifying existence included brutal arrests, transports to German death camps in filthy crowded railroad boxcars, enduring grisly medical experiments, living in wretched ghettos, suffering widespread disease, and for most of the Jewish youngsters, death by poison gas, starvation or bullets.

Living in America, I escaped the Nazis in those horrendous years. But I am forever haunted by the knowledge that had I been born in Transylvania instead of Pennsylvania, I would likely have been one of the 6 million Jews murdered during the Holocaust.

April 19, 1943 was also the first day of the Warsaw Ghetto Uprising when entrapped Polish Jews, mostly young people, began an armed guerilla-style urban battle with crude weapons against German General Jürgen Stroop and his elite SS troops. The outnumbered, outgunned, and physically weakened young Jews battled for four weeks before the well-equipped Nazi forces destroyed the ghetto and killed or deported to death camps most of the 60,000 walled-in inhabitants. 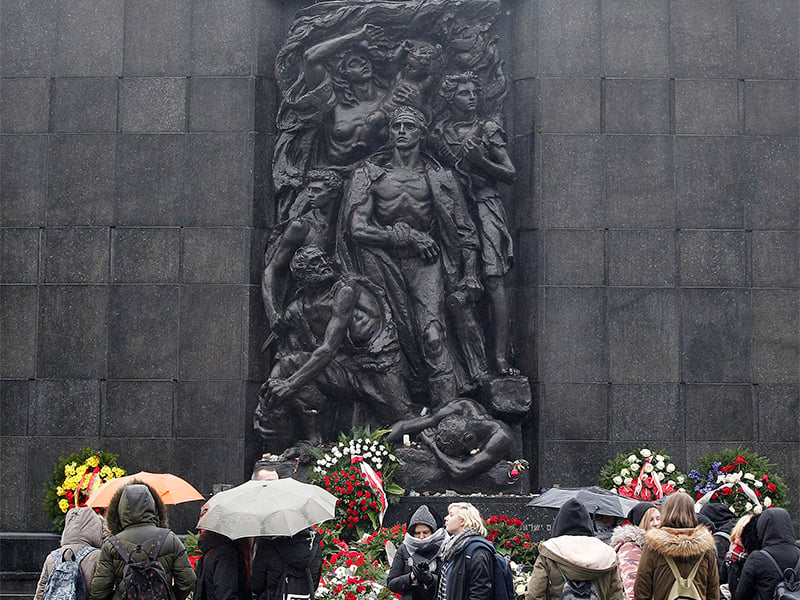 Tourists gather in front of the monument to the Heroes of the Warsaw Ghetto who fought in the 1943 uprising in Warsaw, Poland, on Feb. 1, 2018.  (AP Photo/Czarek Sokolowski)

A proud Stroop entitled his report “The Warsaw Ghetto Is No More,” but after the war he was hanged as a war criminal in Poland. The one-sided heroic battle against the SS 75 years ago has entered the annals of Jewish history and will be widely commemorated this year.

On that date, an international conference on “refugees” — the code word back then for Jewish victims of Nazism — took place in Hamilton, Bermuda. The meeting lasted 12 days and involved the United States and Great Britain. Nothing substantive emerged from the conference; indeed, no final statement was even issued. The fruitless enterprise was a tepid response to the mounting public pressure in the U.S. and the U.K. to save Jewish lives and increase — dare I use the word? — immigration to both Western democracies. Then, as now, immigration was a highly charged term.

David S. Wyman, the history and Judaic studies professor who recently died, and the author of the acclaimed “The Abandonment of the Jews: America and the Holocaust, 1941-1945,” was highly critical of the Bermuda Conference. He noted that it was later called a “façade for inaction.” Bermuda was a failure even though it was clear to American and British leaders in 1943 that the Nazis were determined to kill every Jew under their control.

This year on April 19, my wife Marcia and I are flying to San Diego for the wedding of my great-niece. Both she and her husband-to-be live and work in Israel; the Jewish state … a happy “deposit” to my memory bank.

Finally, guess when Passover begins next year? Of course, April 19.

(Rabbi A. James Rudin is the American Jewish Committee’s senior interreligious adviser. The views expressed in this opinion piece do not necessarily reflect those of Religion News Service.)

News
Tony Evans: On his new Bible and commentary, Kirk Franklin boycott, wife’s health
Opinion
Battle lines form over social justice: Is it gospel or heresy?
Follow us on Facebook!
Submit your photos to RNS