FORT LAUDERDALE, Fla. (RNS) — The spring meeting of the U.S. Conference of Catholic Bishops is historically the less eventful of the American church leadership’s two annual gatherings. It tends to be sparsely attended, focused on ecclesiastic procedures and mostly, well, boring.

But this year’s meeting, at the Marriott Harbor Beach Resort & Spa here, saw the bishops not only engaged in lengthy debates over the nature of their political voice but making headlines with their stern critique of the Trump administration’s immigration policies.

It was an atypically high-profile political splash for a bishops’ conference that has struggled to remain relevant under a Trump administration whose approach to immigrants, refugees and climate change has often been at odds with the USCCB’s — and Pope Francis’ — teachings.

The gathering in Florida also signaled a subtle but important shift, as some bishops made efforts to magnify the USCCB’s embrace of Francis’s priorities and attention-getting style.

After Cardinal Daniel DiNardo, the USCCB president, opened the meeting on Wednesday (June 13) by reading a statement rebuking the Justice Department’s new “zero tolerance” policy on the U.S.-Mexico border and decision to deny asylum to victims of domestic abuse and gang violence, other bishops stood up and suggested prayerful protests or even “canonical penalties” for those who separate immigrant families along the border. 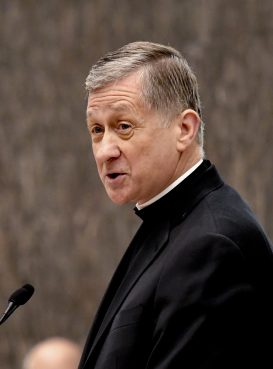 “The United States is now openly before the world using children as pawns to enforce a hostile immigration policy,” O’Malley’s statement read in part. “This strategy is morally unacceptable and denies the clear danger weighing upon those seeking our assistance.”

Taking a page from the pope, who has drawn media attention by meeting with victims of clergy abuse, several bishops then dined at the hotel with individuals who have been impacted by recent immigration changes, including recipients of Temporary Protected Status and Deferred Action for Childhood Arrivals waivers.

The bishops have long advocated on behalf of immigrants, but Cupich, whom Francis elevated to cardinal in 2016, argued the hard-edged tone was not only new, but necessary.

“We criticized by naming the attorney general,” he said, ”and I think we need to do more of that.”

Their sentiments echoed similar criticism about the policies voiced by a host of Protestant denominations, including a resolution at the Southern Baptist Convention that happened to be holding its annual meeting in Dallas this week. Most notable, perhaps, was the concern expressed by staunch Trump allies such as evangelist Franklin Graham, son of the late Billy Graham.

The outcry ultimately triggered a response from Attorney General Jeff Sessions. During a speech on Thursday, he rebuked “church friends” who criticized the zero-tolerance policy, arguing that enforcing the law was “biblical.”

The bishops’ call for justice for immigrants came a week after nearly 100 Catholic leaders — including several bishops — gathered at Georgetown University in Washington, D.C., to discuss how to “effectively work together to advance the common good in a divided nation.”

At a panel discussion at the Georgetown meeting, Archbishop José Gomez of Los Angeles argued that Catholics should adopt a “see, judge, act” approach to Catholic social teaching used by Latin American bishops (including Francis). Gomez said the posture allows believers to “get more involved in making our society … what God wants.”

The bishops in Florida, many of whom disagree on certain policy issues, appeared to grapple with this approach.

During a lengthy debate over a resolution to add supplementary materials to “Faithful Citizenship,” a voting guideline the USCCB distributes in election years, Cupich rose to say he opposed the proposal. Since the overture would leave the document unchanged, Cupich appeared to advocate for a new document, saying it would be “a missed opportunity” not to incorporate “a new body of teaching that we have in the church offered by Pope Francis on a whole host of issues from climate change to poverty, immigration.”

The challenge launched a 90-minute discussion, with many bishops echoing Cupich’s desire for a document that speaks to the times.

Bishop John Stowe of Lexington, Ky., argued the world is in a “different context” following the 2016 election, bemoaning the United States’ withdrawal from the Paris climate accords and its rolling back environmental regulations that effect the Appalachian region Stowe oversees. He also pointed out that “Faithful Citizenship” says little about gun control.

“If the church doesn’t have something to say about those issues, then we’re missing a very important opportunity — especially as we want to reach out to youth and incorporate them more fully into the life of the church,” Stowe said. He later noted that “even though our teachings don’t change, the context changes and the priority of issues change.”

A final vote amended a portion of the original resolution that left the possibility of revisions to the guidelines, and added a clause saying new elements for Faithful Citizenship would “apply the teachings of Pope Francis to our day.”

The final outcome remains to be seen, but Cupich was jubilant about the result. “We’re going to model how these sorts of discussions can happen in public life,” he said. “This was a wonderful moment — we moved things forward, I think.”

“I think the game changer is the tone, the way of speaking, and the insights of Francis that will force us to come up with something that’s fresh.”