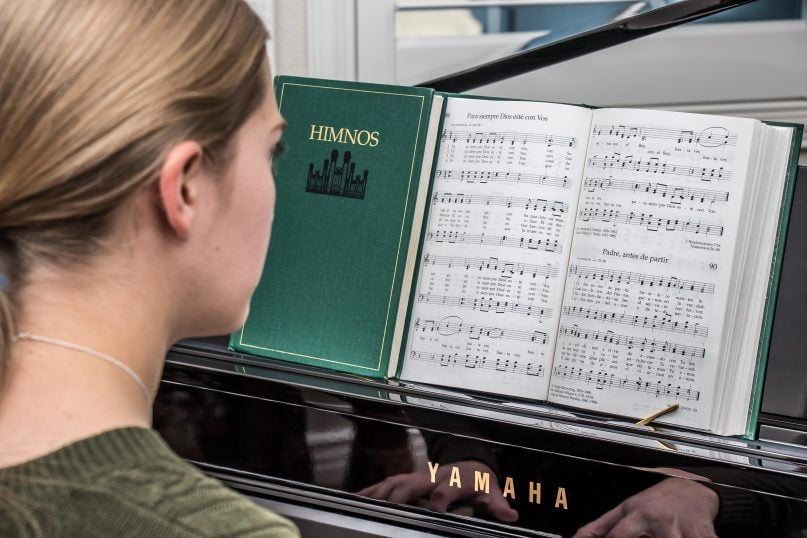 A young woman plays a hymn on the piano from the Mormon church’s Spanish hymnbook. Photo courtesy of Intellectual Reserve Inc.

(RNS) The Church of Jesus Christ of Latter-day Saints announced Monday (June 18) that it is developing a new Mormon hymnal for worldwide use, as well as a replacement for its Children’s Songbook.

The heading of the LDS public affairs news release reads, “New sacred music to reflect global membership.” This statement distills the main theme of the announcement: to have music that more accurately reflects Mormonism’s global diversity.

The current hymnal of the LDS church dates to 1985, when the church had under 6 million members, a majority of whom lived in the United States. Today, it has more than 16 million members, and nearly 60 percent live outside the U.S.

“We recognize the power that sacred music has to unify the members of the Church throughout the world,” said Elder Ronald A. Rasband of the Church’s Quorum of the Twelve Apostles. “We desire to offer a consistent core collection of hymns and songs in every language that reflects the diverse needs of the global Church in our day.”

It will take several years for the Church to create the new hymnal, which will “offer the same hymns and songs in all languages.”

One interesting change is that national anthems will no longer be included in the printed hymnals. However, “sacred music of local interest may be made available to members by language through digital channels as appropriate and doctrinally correct.”

The church is also opening the door to feedback from members, who are invited to make suggestions about music they like via an online survey. Those who write original music may also submit up to five hymns and five children’s songs for consideration by July 1, 2019.

In the FAQ accompanying the announcement, the church states that it encourages submissions from “multiple cultural styles,” even if the proposed songs don’t “match the musical style that has typically been included in the hymnbook or Children’s Songbook in the past.”

Mormons have sometimes expressed strong feelings about the songs that are in the hymnal, lobbying for various favorites to be included or others to be excluded in deference to evolving sensibilities on race, gender and theology. (There was a lively discussion on the topic in 2015.)

The announcement’s emphasis on globalism is an interesting development in a church that has largely exported Amer-European tastes in sacred music to its chapels around the world, forbidding local instruments like drums in sacrament meetings in favor of Western-style piano or organ accompaniment. There is no word on whether that policy on acceptable instruments may also change in the presence of a new hymnal.

This announcement is the latest in a series of globally minded changes that have occurred in the LDS church since January, when President Russell M. Nelson, 93, succeeded Thomas S. Monson in the religion’s top post. At the church’s April General Conference, a Brazilian apostle joined the Quorum of the Twelve, the first LDS apostle to hail from outside North America or Europe. Immediately after the conference, President Nelson kicked off a world tour, visiting eight cities in Africa, Asia and Europe.