BANGUI, Central African Republic (RNS) — Hundreds of Muslims are trapped on the grounds of a Roman Catholic cathedral in the southern city of Bangassou, unable to leave the compound for fear of being attacked by a Christian militia.

Muslims have been attacked and murdered in the area around Bangassou, a small market city on the border with the Democratic Republic of the Congo, as a nearly five-year-old civil war between the Christian majority and Muslims has divided the southeastern part of the country.

In July, a self-styled Church Defense Group for Christians called on all Christians in the country to carry out revenge attacks on Muslims for killing Christians.

The leader of the group, François Nzapakéyé, said “priests and pastors are systematically assassinated.” He cited Father Paul Emile Nzalé, murdered in an attack by 200 armed men in May at Notre Dame of Fatima in the capital, Bangui.

“We will avenge the killings of the many church leaders and men of God, killed in the exercise of their functions. Muslims or Christians, we shall see,” Nzapakéyé said in his communique to followers.

Yet in Bangassou, St. Peter Claver Cathedral has opened its doors to some 2,000 Muslims. And three hours east, hundreds of students and residents have taken refuge in a local parish in Zemio. In both places, Muslims and their protectors live in constant fear of attack amid threats from Christian militia. 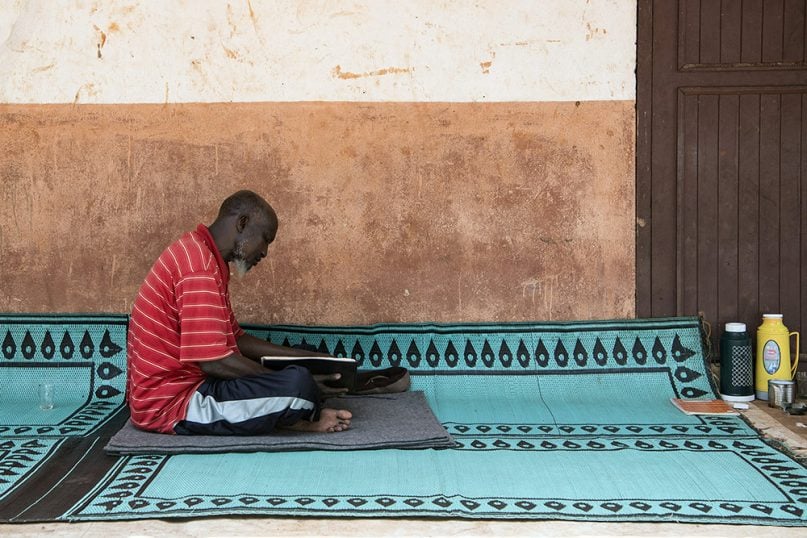 A man reads at a camp for internally displaced persons (IDPs) on the St. Peter Claver Cathedral grounds, in the town of Bangassou, Central African Republic, on Oct. 21, 2017. (UN Photo/Eskinder Debebe)

“There are armed men here waiting for Muslims to emerge out of the camp so that they can kill them,” said Father Yovane Cox of Bangassou Diocese, who lives at the compound. “We need to help them as soon as possible to avoid confrontation and bloodbath.”

“I can be killed any time,” Aboubakar Abdoulaye, 22, told Religion News Service by phone from inside the cathedral compound. “We hear sounds of gunshots and explosives every night. You can’t go outside the camp to look for food or firewood. They will kill you.”

The ethnic and religious conflict dividing the Central African Republic, which is 80 percent Christian, began in 2013, when the primarily Muslim Seleka militia ousted President Faustin-Archange Touadéra. In response, Christian militias called the “anti-balaka” rose up to counter the Muslim rebels.

Thousands on both sides have been killed, and one-fifth of the country’s population has fled abroad or internally.

The Christian militia, said Mohamadou Mana, who lives at the cathedral compound, is “determined to eliminate us.” Mana, 28, lost his family in an attack in March 2017 when he ventured out for food.

“They have been telling us that they are going to completely eliminate the Muslim community in the country,” said Mana. “We need help.”

“They call us traitors,” said Jean-Alain Zembi, a priest in Zemio. “They will kill you if they discover you are protecting Muslims.”

Bishop Juan José Aguirre of Bangassou told the BBC last year that, despite the protection of U.N. soldiers, sheltering Muslims in the Petit Séminaire St. Louis has provoked attacks on clerics.

“We have been attacked by Christians. They attacked my car,” said Aguirre. “Our properties have completely been vandalized. We are targeted from both sides, Christian and Muslim.”

“But we must help people when they need us — those who are vulnerable, including Muslims and children,” said Aguirre. Christian militia members, meanwhile, say they are only responding to attacks on Christians by Muslim militants in the north of the country.

“Seleka militants have been going door to door murdering Christians and destroying Bibles in the north of the country, and no one speaks about it,” Francis Paguere, a militia leader in Bangui, told Religion News Service. “Who has been protecting Christians? Nobody, including even imams, has come out to condemn the killings.”

“It is the war they started themselves and they must be ready to fight,” he said. “They should not be protected by anyone, including church leaders, because they are killing our people.”

Some imams have been calling for harmony, releasing a statement in June 2018 reminding their congregants that freedom of worship “was guaranteed by the Constitution.”

“The acts of violence that have been happening for some time in Central Africa are aimed at turning the political crisis into a confessional crisis,” the statement said.

Aguirre said that the crisis can be solved only by reducing the barriers between Islam and Christianity. “There is no such thing as a Muslim person or a Christian person,” he told the BBC. “Everyone is a human being, and we need to protect everyone who is vulnerable.”

Abdoulaye and others trapped at the Bangassou cathedral need a quicker solution.

“It’s not safe here,” he said. “The government should relocate us.”

Still, Abdoulaye said, he was grateful for the aid he has received.

“We thank the church leaders (for) supporting us. We urge other Christians to be like them and stop attacking Muslims. We need to live in peace.”

(Doreen Ajiambo is a multimedia journalist based in Nairobi, Kenya. She covers stories from East Africa and beyond for various outlets in Europe.)