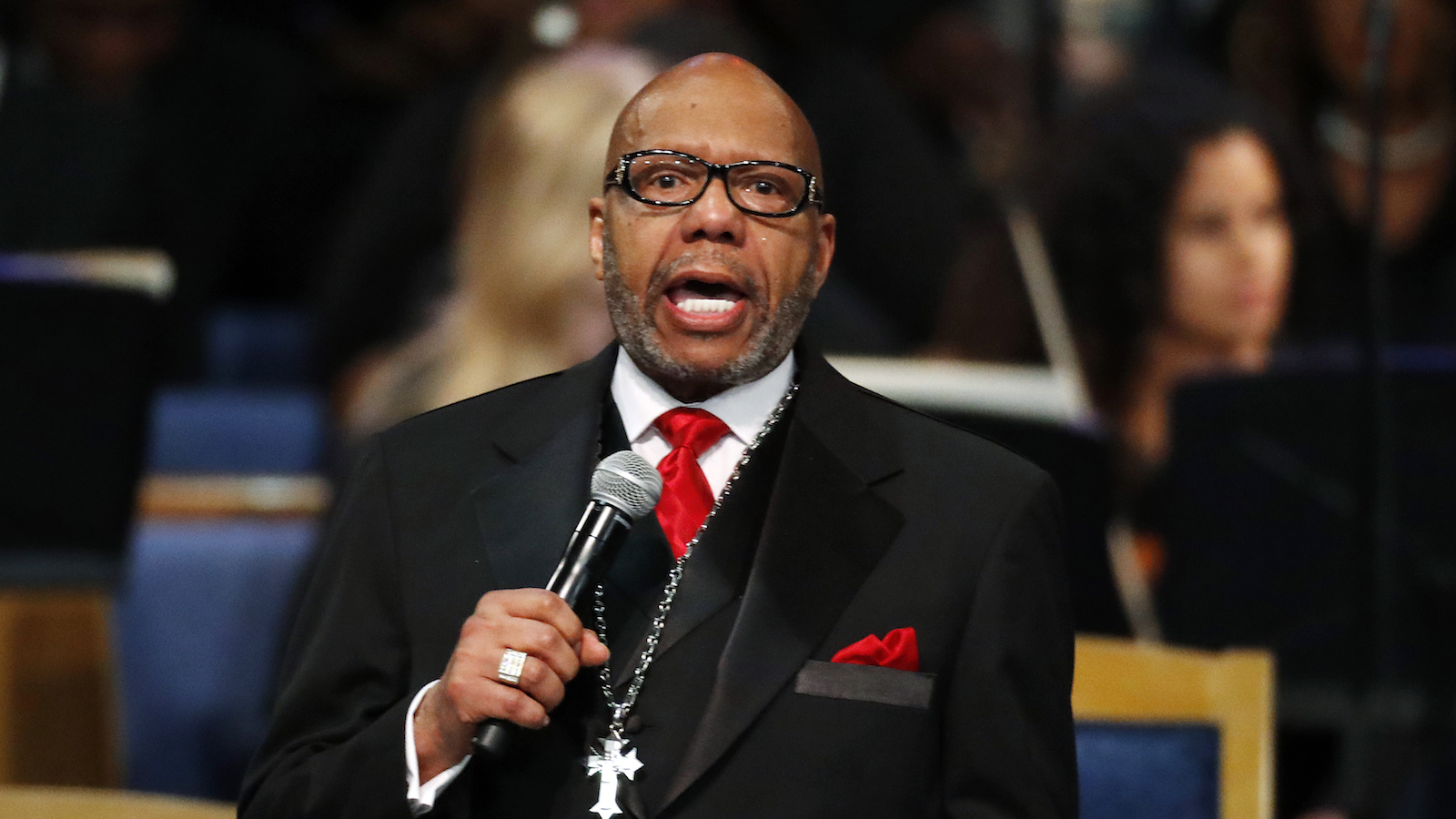 The Rev. Jasper Williams Jr. delivers the eulogy during the funeral for Aretha Franklin at Greater Grace Temple on Aug. 31, 2018, in Detroit. Franklin died Aug. 16, 2018, of pancreatic cancer at the age of 76. (AP Photo/Paul Sancya)
September 9, 2018
Corey Williams

DETROIT (AP) — A black pastor’s controversial eulogy at Aretha Franklin’s funeral laid bare before the world what black women say they have experienced for generations: sexism and inequality in their houses of worship every Sunday.

The backlash was immediate, given Franklin’s role as a mother and a pillar for women’s rights.

Franklin’s grieving family said Williams’ eulogy, which also included references to stopping black-on-black crime, was offensive because it did not focus on her. Social media lit up with criticisms of his remarks as sexist and misogynist.

“Women are hurting about this issue,” said the Rev. Barbara Reynolds, an elder at Greater Mount Calvary Holy Church in Washington, D.C.

“It’s like we are still not equal. Women fight in every cause for everybody else, but we are not celebrated or even tolerated in sacred spaces,” Reynolds said.

Women not only fill the pews in many black churches, they also serve as church nurses and ushers and work behind the scenes. Some are trustees, keeping an eye on church finances and making sure bills get paid. Others are evangelists or are ordained as deacons. But many are denied true leadership roles — and in some cases, women are asked to deliver sermons from the church floor, rather than the pulpit.

Some male ministers “actually deeply believe that men are supposed to be in charge,” said the Rev. Cheryl Townsend Gilkes, assistant pastor for special projects at Union Baptist Church in Cambridge, Mass., and a sociology professor at Colby College in Waterville, Maine.

“Their reading of the Bible does not have a vision of gender equality,” Gilkes said. “Black women are very conscious of how important they are to the survival, growth and continuity of the church. Very often, to become effective, prominent leaders, they have formed their own organizations and exercised that leadership outside the pulpit.”

Williams, pastor of Salem Bible Church in Atlanta, had also eulogized Franklin’s father, the Rev. C.L. Franklin, in 1984. He prefaced part of his eulogy for Aretha Franklin on Aug. 31 by saying “70 percent” of black households are led by black women.

Williams apologized later but defended his choice of topics. He said he was trying to highlight the struggles that single mothers face and his words were taken out of context.

But even during Franklin’s funeral, the absence of black women in the pulpit was evident. The front row was occupied by Jesse Jackson, Al Sharpton and primarily other black male pastors. No black female pastors were featured on an early speakers’ list for the funeral.

Shirley Caesar, a gospel music legend and senior pastor of Mount Calvary Word of Faith Church in Raleigh, N.C., sang during the service but also seized the moment to squeeze a little preaching in. Most of the individual singers were prominent female performers.

“There are male leaders in some black churches that don’t allow women to preach from the pulpit and, if they do, it’s typically on special occasions like Women’s Day,” said the Rev. Horace Sheffield, pastor of New Destiny Christian Fellowship of Detroit.

“Some denominations are more stringent and less likely to affirm women than others,” Sheffield said. “That’s part of our Christian tradition and that has always bothered me. We can be discriminated on the color of our skin and we can discriminate against women because of their gender. It still exists by virtue of the fact that you have churches that don’t allow female ministers as pastors. It ... renders us in a lesser position to challenge discrimination in any form or any place when we’re part of it.”

About 70 percent of the 500 members at Sheffield’s church are women. Sheffield said two women serve as associate pastors. Some of the deacons are women and the head of the steward board is a woman.

He said the roles of women in black church leadership are changing, “but we’ve got to open it up some more.”

The Rev. Maidstone Mulenga, communications director for the United Methodist Church Council of Bishops, said having only men in leadership and pastoral roles is part of the theology taught in some churches.

“If it comes from a background that says only male preachers can be in the pulpit, then (the church members) will resist a female preacher — whether white or black,” Mulenga said.

Mulenga said the United Methodist Church is very supportive of female leaders in churches and has a number of female bishops. The church’s Baltimore-Washington Conference is led by Bishop LaTrelle Easterling, a black woman. But he said female black preachers have to work twice as hard as male black preachers.

“For a female black preacher it is almost like standing in the middle of the highway and getting hit by traffic from both directions because they are black and because they are female,” Mulenga said.

The National Baptist Convention says on its website that it leaves the matter to its member churches because interpretations about who can serve in the ministry “tend to be particularly emotional and divisive.” Its most recent roster of state presidents, from January 2017, is all male.

The Church of God in Christ on its website identifies only black male pastors as members of its general board and its board of bishops.

Last year, the Pentecostal Assemblies of the World promoted two women to bishop and gave them responsibility over churches in Sierra Leone and South Africa. The presiding bishop at the time, Charles Ellis, told the Tennessean newspaper in Nashville that the two women, whose home churches are in the U.S., would “actually oversee and they will govern male pastors.”

But some male pastors and preachers wield so much power in their churches that they rarely are confronted, said Reynolds, of Washington, D.C., who was ordained in 1996.

“We don’t really challenge the pastors,” Reynolds said. “We either go home and don’t go back to church or some brave women start their own church.”