(RNS) — Paige Patterson, ousted as president of a prominent Southern Baptist seminary this spring for allegedly dismissing women’s concerns about domestic abuse and rape, is set to teach a Christian ethics course at a Charlotte, N.C., seminary later this month.

Patterson, once the top elected official of the Southern Baptist Convention, was removed in May from his position as president of Southwestern Baptist Theological Seminary after reports that he mishandled rape allegations by students. His lawyer has rebutted those claims.

Patterson plans to co-teach a mid-October weeklong class on “Christian Ethics: The Bible and Moral Issues” with Richard Land, president of Southern Evangelical Seminary, a school that is not affiliated with the SBC.

“Dr. Patterson’s one of the most significant figures in evangelicalism in the last 20 years, at least, of the 20th century and the first part of the 21st century,” Land told Religion News Service, “and we believe that there are a lot of people who would like to hear from him about living the Christian life in America. I believe he’s an asset to evangelicalism and we’re looking forward to it.” 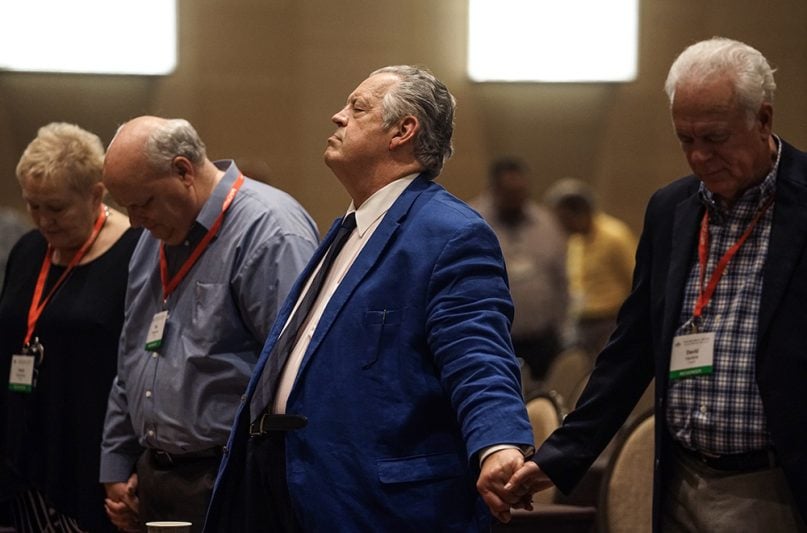 Richard Land, middle, president of Southern Evangelical Seminary in Charlotte, N.C., prays at a meeting of Connect316 on June 11, 2018, at the Omni Hotel in Dallas. Photo by Kathleen Murray via Baptist Press

Land first met Patterson when Land was a student at New Orleans Baptist Theological Seminary and soon became a staff evangelist at the church in the city where Patterson was pastor. Patterson and Paul Pressler, a former judge and prominent Southern Baptist layman who has been the target of sexual abuse allegations, which he denies, were both groomsmen at Land’s wedding.

In the 1980s, Patterson and Pressler together led the denomination’s conservative turn, creating a resurgence (critics called it a takeover) from what they saw as a liberal drift. Land was among those who hailed the move that led to more conservative leadership across the SBC’s seminaries and agencies.

Land has not escaped controversy himself. In 2012, he was the subject of an ethics probe that resulted in his receiving a reprimand for racially charged words on his former radio show and for quoting material without attribution. He retired early as the leader of the SBC’s Ethics and Religious Liberty Commission when he took the helm of the seminary now housed on a two-building campus in Charlotte.

Since his departure from Southwestern Seminary in Fort Worth, Texas, Patterson has been busy with speaking engagements, according to Scott Colter, a spokesperson. “Dr. Patterson continues to receive frequent speaking invitations both domestically and internationally,” Colter told RNS. “Encouraging God’s people and sharing the saving message of Christ remains his top priority in every engagement. His calendar is quite full in the months ahead, and he is currently booking into late 2019.”

This latest juncture in Patterson and Land’s friendship was greeted with disappointment by leaders of the “Such a Time As This Rally,” a protest held outside the SBC meeting in Dallas in June that has continued as a movement urging greater awareness of sexual abuse among pastors and seminarians.

“Paige Patterson has proved time and time again that he is unfit to educate others on topics of ethics and morality,” said Ashley Easter, spokesperson for the rally. “Anyone who invites him to speak on these topics is guilty of the same hypocrisy as Patterson himself.”

Karen Swallow Prior, an English professor at Liberty University who helped draft a May letter from thousands of Southern Baptist women to Southwestern Seminary’s trustees questioning Patterson’s leadership, said she hopes the course will include the perspectives of evangelical women. 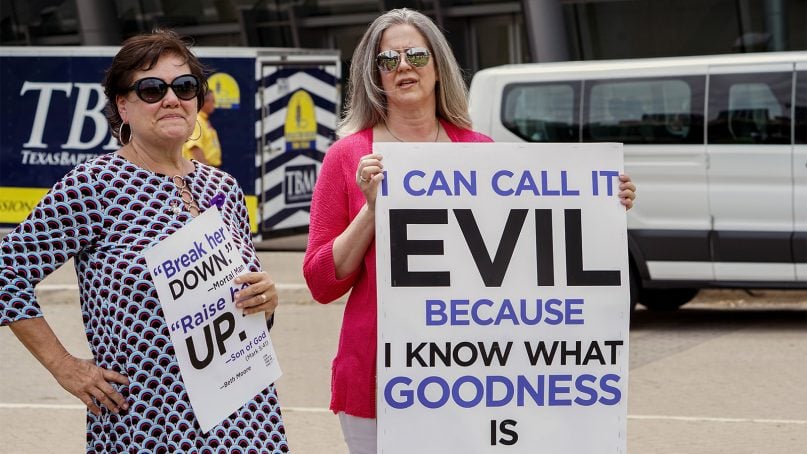 Participants of the “For Such a Time as This Rally” hold signs outside of the Kay Bailey Hutchison Convention Center on June 12, 2018, on the first day of the two-day Southern Baptist Convention annual meeting in Dallas.  Photo by Marc Ira Hooks

“I strongly and sincerely encourage them to invite women who have been subject to ethical failures within the evangelical church to come and share their experiences with the students,” Prior said. “Doing this would be a great step forward in advancing these important conversations, particularly around sexual ethics.”

Land said the seminary, whose students mostly take classes online, had an overall enrollment of 210 for the fall semester as of Monday (Oct. 1).

Asked about those who may disagree with him on the appropriateness of an ethics course being taught by Patterson or him, Land said: “No one’s forcing them to take the class.”