BOSTON (RNS) — On a Friday night not long after 11 people were killed by a gunman at the Tree of Life Synagogue in Pittsburgh last October, Edmund Case was standing in the entryway of Temple Shalom in Newton, Massachusetts, having volunteered to act as an usher for that night’s services.

A man Case didn’t know, and whose look struck Case as “off,” entered the building and asked, “Could I look around?”

Internally, Case felt a zing of alarm. “Why would someone come on a Friday night and want to look around?” he thought.

The man turned out to be new to town and looking for a synagogue to join. For Case, the experience revealed how, in an age of heightened awareness of threats at synagogues, remaining warm and welcoming can be complicated.

“I wanted to be welcoming,” said Case, who, not coincidentally, is the author of “Radical Inclusion: Engaging Interfaith Families for a Thriving Jewish Future.” “You don’t want to turn someone away.”

Some degree of security comes naturally to many American synagogues this time of the year. During the High Holy Days, the sacred season that begins Sept. 29 this year with Rosh Hashana, attendance is high. Police officers are usually on-scene to direct traffic, and some even stand at the door. It’s common for congregants to secure tickets for services, creating an obvious checkpoint for admission.

But shootings at a synagogue in California and a mosque in New Zealand, as well as the synagogue in Pittsburgh, have complicated and expanded synagogues’ security measures, not only at High Holidays but year-round. Congregations know how to identify someone who is there to do harm and have installed surveillance devices and hired police officers or private security personnel to offer more protection and train members to screen visitors. 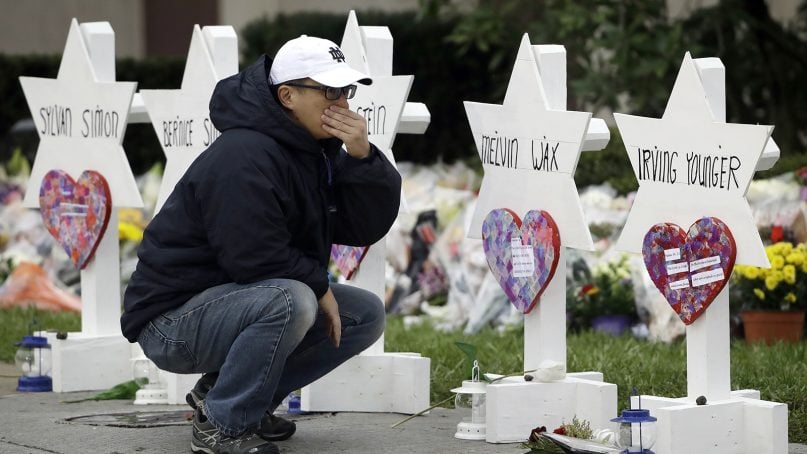 A person pauses in front of Stars of David with the names of those killed in a deadly shooting at the Tree of Life Synagogue in Pittsburgh on Oct. 29, 2018. (AP Photo/Matt Rourke)

At a time of year when people who rarely attend show up, or when people show up for the first time, however, this last task becomes especially tricky. According to the Pew Research Center, upward of 70% of non-Orthodox Jews in the U.S. are married to non-Jews and, according to the American Jewish Population Project, at least 11% of American Jews are people of color. This means that traditionally Jewish last names, not to mention physical appearances, can’t be relied upon as indicators of who is coming for community and who might be of concern.

Rabbi Rick Jacobs, president of the Union for Reform Judaism, the largest Jewish denomination in North America, calls diversity both a “fact” and a “blessing” of the current landscape. “Making synagogues and Jewish communities relevant and welcoming of the diverse Jewish community is requiring some new muscles,” he said, adding, “I think we are doing better and better.

“When the security piece gets added in, unless we’re really intentional, we could miss,” Jacobs said, particularly if security procedures or personnel signal exclusion or trigger discomfort among Jews of color, transgender Jews or others.

The increased need for security is undeniable, however. According to the Anti-Defamation League’s annual audit of anti-Semitic incidents in the U.S., last year was the third most active since the group began tracking such incidents in the 1970s and showed a 99% increase since its 2015 report.

The more than 1,800 incidents recorded by the ADL included physical violence such as the shootings in Pittsburgh and Poway, California, threatening robocalls against Jewish schools and community centers and anti-Semitic graffiti and speech at public schools nationwide. “Every rabbi in America is working to make their synagogues more safe, and I want people to be safe,” said Rabbi Rachel Timoner, senior rabbi at Congregation Beth Elohim, a nearly 1,000-family Reform congregation in the Park Slope neighborhood of Brooklyn that recently completed a full security assessment, which resulted in staff changes and physical alterations to its building.

Timoner expressed frustration at both the costs and increased energy required, calling the threats to safety for Jews and other minorities “unacceptable.”

“We’re having to take resources away from our mission to ensure that people are safe,” she said. “We are spending significantly greater budget on security than we ever did before, and that means we’re not spending on a lot of other things that are our mission. We know we have to do it, but it’s not right that we have to do it.”

Jewish organizations are working to provide congregations with guidance and resources to navigate this complex terrain.

Barry Mael, senior director of synagogue affiliations and operations for the United Synagogue of Conservative Judaism, the 600-congregation Conservative Jewish movement, has worked with temple administrators, executive directors and clergy through a series of webinars, drawing 400 regular attendees.

“In the past, people used to say, we don’t want to be a fortress,” said Mael, “but we can’t not pay attention to this.”

Rabbi Avi Bukiet’s Arlington, Massachusetts, home, which is also a Lubavitch Hasidic “Chabad house,” was attacked in two acts of apparent arson in June. He says the new safety technology, security committee and other protocols he has put in place enable him to continue to offer a welcoming, safe space for anyone attending a class, celebration, religious school or worship service. 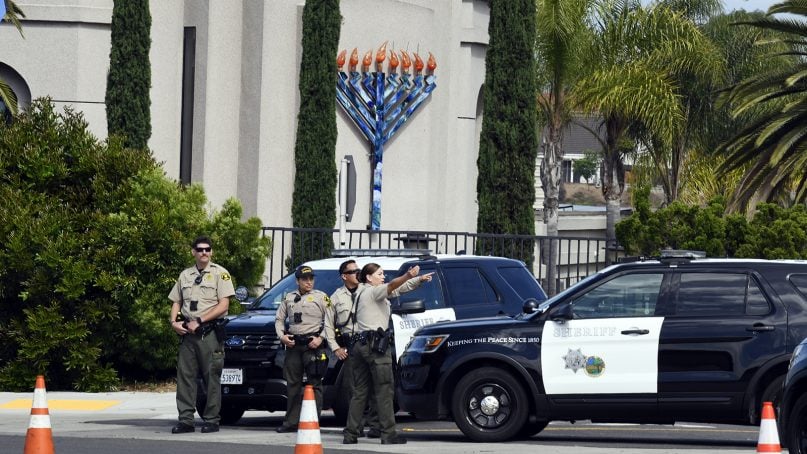 San Diego County sheriff deputies stand in front of the Chabad of Poway Synagogue on April 28, 2019, in Poway, Calif. A man opened fire the day before inside the synagogue near San Diego as worshippers celebrated the last day of Passover. (AP Photo/Denis Poroy)

The necessity of the new measures is “not a good feeling,” he said. “But there’s no doubt that things have changed. We can’t be naïve.”

But neither, said Jeremy Yamin, associate vice president and director of security and operations at Combined Jewish Philanthropies in Boston, do synagogues need to become forbidding to outsiders.

Yamin, a former U.S. State Department security official, advocates a “layered approach” that allows congregations to cultivate a culture of openness and inclusion while also protecting their people and property. Congregations should prepare on multiple levels, with CPR and tourniquet medical training, regular emergency evacuation drills and smart traffic and parking management.

“One size does not fit all,” said Yamin.

And not everyone needs to be a known factor as long as synagogues train lay leaders how to recognize “clusters of behavior that don’t make sense” in an unknown person in the building.

These new security protocols, in Bukiet’s view, ultimately protect not only community members’ physical safety but spiritual safety that Jewish congregations come to synagogue for.

And despite the fear and upset of the attacks, Bukiet maintains hope for the future. “The whole idea of the High Holy Days,” he said, “is that it’s the day that the human race is coming before God and asking for a new slate.”