(RNS) — Members of Beaumont Presbyterian Church in Lexington, Kentucky, aren’t exactly keen on reopening their church for in-person worship anytime soon. Given the ongoing pandemic caused by the novel coronavirus, the church’s pastor, the Rev. Stephen Fearing, said his congregation is unlikely to gather physically until June or July at the absolute earliest.

But as the congregants mull over whether to worship together again physically, Fearing says he knows exactly who they will speak with first: his insurer.

“We would never, ever consider getting back together without talking to our insurer,” Fearing said. “The liability is just too great.”

Insurance companies are primed to play an increasingly influential role for houses of worship as governors ease social distancing restrictions and many faith groups prepare to reopen their doors, with agents providing guidance and advice to policyholders wary of litigation should one of their worshippers contract or spread the disease. But questions remain as to how — or even if — insurers will cover communities struck by COVID-19, or how best to minimize risk in the midst of a pandemic.

Fearing said the situation has been on the minds of Beaumont and other Kentucky churches ever since Gov. Andy Beshear issued a stay-at-home order that largely barred faith groups from in-person gatherings on March 19, prompting most religious groups in the state to shutter their doors. Worship communities have been told they can reopen on May 20, but Transylvania Presbytery, a regional Presbyterian governing body that includes Fearing’s church, recently issued a series of 10 recommendations — framed as “commandments” — for churches to consider before gathering people under the same roof.

“We would also advise you to contact your insurance carrier to check on any liability issues that may be involved,” the document reads. “Just remember if you vote on or publish any protocols, you must adhere to them. Ignoring them once you’ve adopted them is a sure-fire way to create liability on behalf of the church.”

Faith communities across the country are grappling with similar questions, but any advice they glean from insurers may vary, as states have taken wildly different approaches to the question of religious worship during a pandemic. What’s more, insurance companies that Religion News Service spoke with said most plans do not cover pandemic-related incidents such as disease-related deaths. The same is true for other sectors of the insurance industry: The scourge of COVID-19 has unleashed a wave of lawsuits from small businesses hoping to force insurers to pay for losses incurred after being forced to shutter their storefronts due to the pandemic.

Both companies RNS spoke with — which specialize in insurance for faith groups — say they are waiting to see the results of ongoing litigation or proposed legislation before weighing in on whether insurers should cover pandemic-related losses and liability that were not previously part of existing plans.

It also remains unclear whether faith groups risk losing their insurance with specific companies if they blatantly violate existing state or local restrictions on large-scale worship. A lawyer for the Rev. Rodney Howard-Browne, pastor of the River at Tampa Bay Church who was arrested by the Hillsborough County Sheriff’s Office and charged with violating public health emergency rules after he continued to convene large worship services despite the pandemic, said that despite claims to the contrary, the church has not lost its insurance. 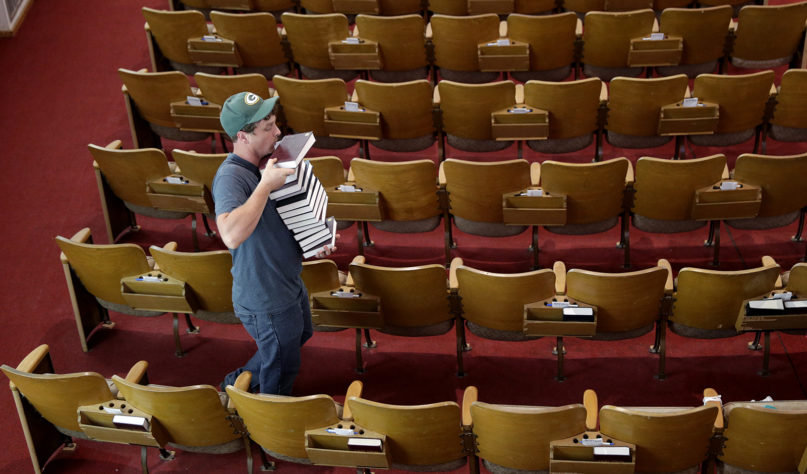 For now, companies said they remain neutral on whether churches should reinstitute physical gatherings when restrictions are lifted.

“Our position is not necessarily recommending one way or the other, but helping churches and other insured organizations understand where they can get access to the information they need to make their own individual decisions,” said Steve Rominske, senior vice president and chief risk officer at Church Mutual, a company that insures churches and a host of other faith-based organizations.

Even so, insurers acknowledged that the decision to open a house of worship carries considerable risk. Companies such as GuideOne have encouraged their policyholders to consult local and federal guidelines before reopening, and Church Mutual developed an extensive list of recommendations for congregations to consider.

Guy Russ, Church Mutual’s expert on risk control, said his company’s recommendations include maintaining 6-foot distance from other parishioners in all directions, sterilizing all surfaces, using hard-cover seating options instead of fabric-covered pews to expedite cleaning, removing physical holy books or hymnals from use, and posting signage or projected messages to clearly indicate expectations for worship attendees.

Russ also stressed the need for religious groups to train staff and volunteers not only on cleanliness and social distancing practices, but also on how to address individuals who fail or refuse to comply with posted guidelines. In addition, he suggested houses of worship consider instituting some form of “contact tracing,” whereby faith leaders either retain the contact information of people who attend events or use smartphone applications to help local authorities to trace the spread of the coronavirus if members of the congregation get sick.

“If everybody has followed everything that you ask them to do and somebody who has attended an event at your facility becomes ill, what is your protocol going to be?” he said. “We are recommending that each organization thinks through that question.”

Fearing said he has reviewed similar recommendations from church officials and local authorities, and the litany of expectations did not inspire members of his roughly 140-member church to rush back into the sanctuary.

“They’re just overwhelming,” he said of the recommendations.

Rominske said the company has tried to institute additional creative solutions to assist churches as best they can. Church Mutual launched a “Protect the Message” campaign that included a website designed to help congregations stream their worship services online to avoid the risk of spreading the coronavirus by gathering in person.

Similarly, GuideOne offered to help churches establish online giving platforms that make it easier for them to receive tithes and donations in lieu of a physical offering plate. Their team has also taken to using online tools and satellite imagery instead of sending insurance staff to conduct on-site visits with policyholders.

Fearing said his church is preparing to speak with its insurer and has assembled a “Healthy Church Committee” to help oversee the congregation’s eventual return to relative normalcy. But for now, his community is unlikely to follow the path of other faith groups who have called for a return to in-person worship, sometimes by suggesting divine protection.

“Bad theology has consequences,” he said.