(RNS) — On Friday, the state of Utah will observe Pioneer Day, the annual holiday commemorating the first Mormons who settled the Salt Lake valley in 1847. Having fled religious persecution in Ohio, Missouri, and Illinois, these Latter-day Saints had at last established a homeland outside the borders of the United States — Utah was at that time part of Mexico — in which they could practice their religion in a safe haven.

With Pioneer Day happening during a global pandemic, this year there will be no parades through downtown Salt Lake City, no large cookouts, no re-enactments or handcart pulls. (I did find an article about an outdoor heritage festival happening in St. George, Utah. The organizers say that social distancing will be maintained but that they are also having some sort of bouncy castle for children, which seems like a social distancing nightmare. Masks will not be required.)

Pioneer Day is also happening during the most significant civil rights moment America has seen in half a century. As we engage in self-examination as a country, some people are thinking hard about the messages of celebrations like Pioneer Day.

Both the pandemic and race are relevant to Pioneer Day 2020. On the one hand, the pandemic makes us more open to acknowledging the strength we gain from courageous people who have gone before us, people who faced hardship and emerged on the other side with their community largely intact. There’s definitely something about living through unprecedented times that makes us seek the wisdom of the past.

For my part, the pandemic has allowed me time to finally sort through my mom’s boxes in our basement, filled with letters, family history research and old photos. It’s taking a long time, but hey! What’s a global pandemic good for if not months-long family history projects that consume the entire surface of the dining room table?

On the other hand, the racial context of this spring and summer has Americans taking a hard look at history, whether it’s statues of Confederate leaders or traditions like Columbus Day or Pioneer Day. I’m just going to come out and say it: Pioneer Day has long been a celebration of whiteness, of Euro-American culture.

For most people today, this is largely unconscious, but in the 19th century, when the tradition began, I would argue it was intentional. Mormons in that period were anxious to prove their American-ness, which meant their whiteness; contributors to the Woman’s Exponent, the church’s turn-of-the-century journal, repeated assertions that they were “daughters of the Pilgrims” and “of old Yankee stock.” Mormons bristled at Protestant Americans’ depictions of them as anything less than white (which happened often, as Paul Reeve’s excellent work shows).

But rather than challenge the racial hierarchy that placed whiteness at the top, they only sought to cement their own place in that hierarchy.

I’ve written before about how Latter-day Saints as a people, and the Church as an institution, have a long way to go in terms of confronting and dismantling racism. Don’t think that I don’t count myself in that group. This year, as I have focused on reading and listening to people of color, I’ve had plenty of uncomfortable moments of recognition where I’ve come face to face with being part of “covert” racism, the kind that is hidden and often unconscious.

Some people have diagrammed this as a pyramid or an iceberg. The visible part of the iceberg, the portion sticking up out of the water, contains overt racism: hate crimes, the N-word, swastikas, racial slurs. That stuff is, literally, just the tip of the iceberg. The much, much bigger part of the iceberg is down below, and it contains some behaviors I recognized in myself, such as expecting POC (people of color) to educate me, prioritizing white voices as expert voices, having Eurocentric beauty standards or being surprised when I first heard Mumia Abu-Jamal on NPR and thinking, “He doesn’t sound black.”

I’ve done all those things and probably a lot more. It’s humbling and hard to talk about the ways in which we are racist.

But in the LDS community, these are not yet discussions we’re having. Too often I hear variations of “all are alike unto God” or “I don’t see color.” (Of course God loves us all equally; that doesn’t mean that racism isn’t real and terribly damaging. Weaponized in that situation, the “all are alike unto God” Scripture is really saying “Your experiences as a person of color aren’t important enough for me to listen to.”)

Many Latter-day Saints are looking only at the tip of the iceberg — thinking that since we’re no longer actively denying priesthood or temple sealings to Black people, it’s all good. That because overt racism is no longer happening at the institutional level, the problem of racism is behind us, and we can “Be One.” Which too often can mean “fall into line as part of the majority and Be White.”

Recently a pastor shared a handout that helped to open my eyes about the progress institutions need to make as they journey from racist to non-racist to anti-racist. Looking at the six stages of the handout (the original is here), I would say the Church of Jesus Christ as an institution is straddling stages 2 and 3. Individual members may be at other stages. I’ve adapted and slightly abbreviated the chart for an LDS context: 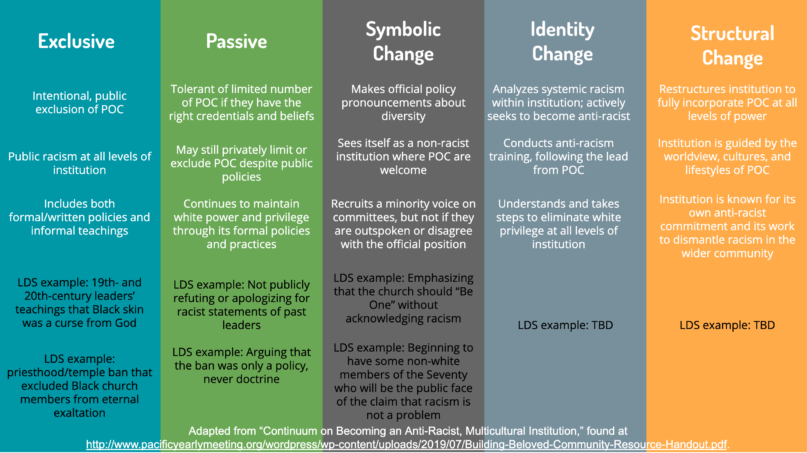 Instead of congratulating ourselves about how we’re not racist anymore, how about spending this Pioneer Day thinking of changes we can make to be anti-racist in the future?

It won’t be easy. Anti-racism work is hard, and it’s uncomfortable. I don’t know when or how it will end or how much of myself I will have to surrender in the process.

Come to think of it, that sounds very much like a pioneer trek. Fresh courage take.

Renaming BYU buildings after non-racists, and other ways to dismantle Mormon white supremacy

The white privilege of US Mormons

Written in Protest
When soul music becomes sanctuary from racial terror
Follow us on Facebook!
Submit your photos to RNS