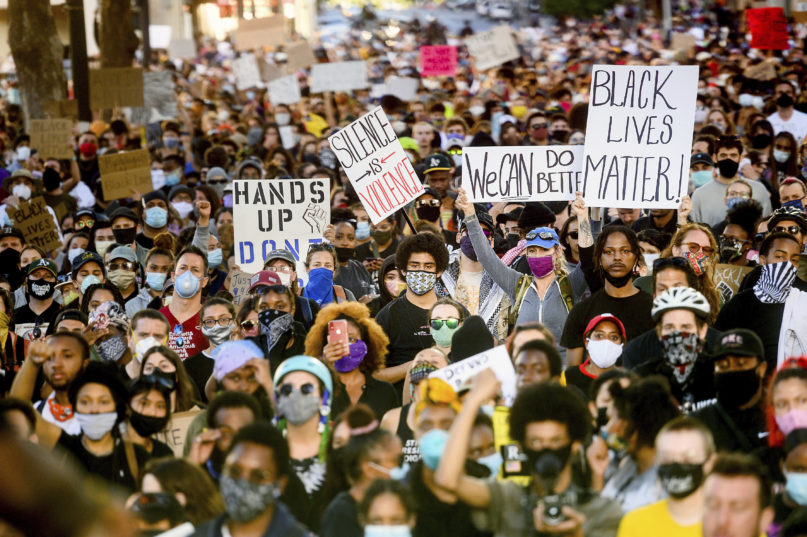 Several thousand demonstrators gather in Oakland, Calif., on Monday, June 1, 2020, to protest the death of George Floyd, who died after being restrained by Minneapolis police officers on May 25. (AP Photo/Noah Berger)

On Monday, Russell M. Nelson, the president of the Church of Jesus Christ of Latter-day Saints, released a statement on Facebook condemning racism and calling for mutual respect:

We join with many throughout this nation and around the world who are deeply saddened at recent evidences of racism and a blatant disregard for human life. We abhor the reality that some would deny others respect and the most basic of freedoms because of the color of his or her skin.

We are also saddened when these assaults on human dignity lead to escalating violence and unrest.

The Creator of us all calls on each of us to abandon attitudes of prejudice against any group of God’s children. Any of us who has prejudice toward another race needs to repent!

An unequivocal statement condemning racism is good to see. It’s an improvement that the church is addressing the elephant in the room—racism, most recently exemplified in the brutal killing of George Floyd last week in Minneapolis, though the statement does not name him or cite his death.

The church has not always stepped in to denounce racism. As late as the 1960s and 1970s, some of its top leaders were staunch segregationists, with apostle Mark E. Petersen saying that since the Lord himself had separated the races, “who is man to change that segregation?” (Heaven, however, would be integrated . . . because if black people were “faithful all [their] days,” they could go there as servants. Um, thank you?)

That teaching has been repudiated by more recent leaders and statements of the church, as have other racist doctrines of the past, such as that black people bore the mark of Cain, that they were less valiant in their premortal lives, and that interracial marriage was a “wicked virus,” as J. Reuben Clark taught in 1946. It’s a long and sad list.

But if the church has made strides since the middle of the twentieth century, its ideas about race seem to be grounded not in contemporary realities but somewhere in the in-between world of racial dynamics in the United States in the 1980s.

In that decade, it became permissible for middle-class white people to praise Martin Luther King (but not Malcolm X). MLK even got a federal holiday named after him.

In the 1980s, exceptional African Americans who embodied “model minority” characteristics could be lifted up as heroes. Bryant Gumbel broke barriers in morning talk shows, Vanessa Williams became the first black Miss America, and “The Cosby Show” became a hit series on NBC.

In the 1980s world, it became expected that middle-class white people would denounce individual racial prejudice as unkind and even un-American. But they were not expected to acknowledge racism as a systemic problem of ongoing injustice, rather than just the occasional result of poor individual choices.

I’m grateful for President Nelson’s statement, especially the first half that I quoted above. The second half brings up more complicated feelings:

Any nation can only be as great as its people. That requires citizens to cultivate a moral compass that helps them distinguish between right and wrong.

Illegal acts such as looting, defacing, or destroying public or private property cannot be tolerated. Never has one wrong been corrected by a second wrong. Evil has never been resolved by more evil.

On the one hand, I agree with this. I, too, believe that evil has never been resolved by more evil, and that looting and the destruction of property are wrong. On the other hand, I recognize that it’s a hallmark of white privilege to focus on quelling civil unrest without attempting to listen to minority voices and trying to internalize why the unrest is happening—indeed, why it feels like that’s the only thing that will ever get people in power to pay attention.

Maybe President Nelson is listening to the protestors in meetings behind the scenes; I have no way of knowing. But there’s no evidence from this statement that he’s connecting with their lived reality that black and brown bodies have been seen as expendable cannon fodder again and again. (How long, O Lord?) They are more likely to die of police brutality than white Americans, more likely to live in poverty, more likely to be jailed for longer periods for the same crimes, and more likely to have limited access to health care. (How long?)

Part of white privilege is not having to even know about this.

Perhaps one way to start listening is to hear what statistics say about how differently white and black Mormons in the United States feel about racism. In the 2016 Next Mormons Survey, two-thirds of white Mormons agreed with the statement that “blacks who can’t get ahead in this country are mostly responsible for their own condition,” while only one-third said that “racial discrimination is the main reason why many black people can’t get ahead these days.”

For black Mormons, those figures were reversed, with two-thirds indicating that if black Americans failed to get ahead in society, it was the result of racism.

Can we listen to and heed their lived experience?

It doesn’t help that there are so few African Americans who are active Mormons. A range of studies have put their numbers between 1% and 4%. This makes their voices even more invisible in the church than they are in society, where they are 12% or 13% of the population. And while the United States as a whole is diversifying every year, with growing populations of Latinx Americans and Asian Americans as well as African Americans, Mormonism has stayed much the same: it is still between 85% and 90% white.

There is racism in Mormon country, just as there is in the rest of the country. In late January, Utah made national headlines because of a racially motivated attack on a black Latter-day Saint missionary who was walking with his white mission companion in Utah County, Utah, where more than four in five residents are Mormon. The black missionary was beaten by six assailants and called by a racial slur. The white missionary was not attacked.

Lives are at stake here. It’s time to get out of the 1980s and do the hard, hard work of listening to—and acting on—what people of color have to say.