Bolz-Weber has already voted. She endorsed a presidential candidate for the first time this year, throwing her support behind former Vice President Joe Biden.

What she’ll need Tuesday (Nov. 3) as she awaits the result is what she has described as “spiritual Xanax” — something to keep her from watching news coverage all day, to help her stay focused and remember what’s important.

“I am tired of feeling afraid all the time. It’s just not productive,” Bolz-Weber said.

She’s not the only one.

This year’s presidential election is a source of stress and anxiety for most Americans.

The American Psychological Association’s Stress in America survey put the number of people reporting “significant” election-related stress at nearly 70% this month, compared to 52% in 2016. That reaches across aisles to majorities in both political parties, though Democrats report feeling more stressed than Republicans.

Not only do the stakes feel high in the contest between Biden and President Donald Trump, two wildly different candidates, but its results feel uniquely uncertain. Experts have warned it may take longer than usual for all votes to be counted due to the pandemic and record early voting, and some fear violence might erupt, as the president has refused to commit to a peaceful transfer of power should he lose.

Amid a pandemic, after a summer of mass protests and civil unrest and facing an uncertain and polarizing election, Americans are on edge.

And so a number of religious leaders, houses of worship and faith-based organizations are planning spiritual care to help their communities handle the fear, stress and anxiety throughout the Election Day. 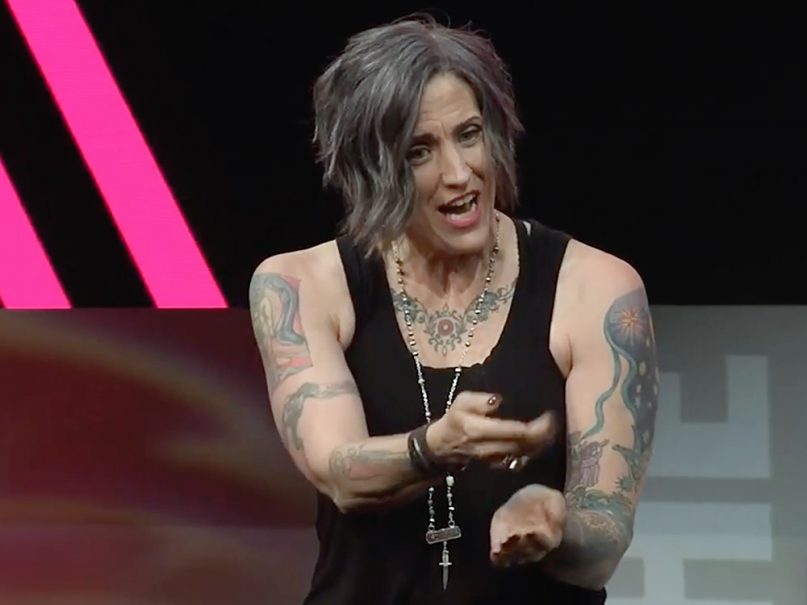 Minister and author the Rev. Nadia Bolz-Weber speaks during the 2018 MAKERS Conference. Screengrab via Makers.com

Bolz-Weber is among them.

Her offering, “Keeping It Together on Election Day,” gathers all the different people and perspectives she said she wants to hear from on Tuesday.

What has been helpful for her is taking a bigger perspective, realizing humans have experienced all kinds of suffering.

“If you’re going to be accessing poetry and prayer and meditation and mantras, you’re sort of drawing upon the wealth of those who’ve come before us and accessing their wisdom and whatever kept them on track and kept them together,” she said.

The public theologian and ordained Lutheran pastor in the Evangelical Lutheran Church in America has organized a group of faith leaders from across religious traditions to share a prayer, a joke, anything “centering and calming and helpful” — she’s not sure what exactly everybody has planned — for a few minutes at the top of each hour on Tuesday. She’ll stream their interactions from 11 a.m. to 11 p.m. Eastern time on Instagram Live, where she goes by @sarcasticlutheran.

They also include the Rev. Jodi Houge of Humble Walk Lutheran Church in Minneapolis, who inspired “Keeping It Together on Election Day” with Humble Walk’s own “Prayer for the Nation and You” offered by church members throughout the day Monday.

Like Humble Walk, a number of ELCA churches, conferences and synods are offering prayers throughout the day on Facebook and Zoom. That includes the Eastern Missouri Conference of the ELCA Central States Synod; the South-Central Synod of Wisconsin; and First Lutheran Church in Onalaska, Wisconsin.

Another new ELCA worshipping community, Emmaus Table, is logging off Tuesday evening and inviting people of all religious and political beliefs to join them for a masked and socially distanced walk around Green Lake in Seattle. They’ll pray as they walk for a free and fair election and for every vote to be counted, among other things.

Many Catholic communities are offering prayerful spaces online or in their sanctuaries, too. More than 600 churches across the U.S. are opening their doors for individual Eucharistic adoration on Tuesday, according to Unite Our Nation, and the brothers of the Society of Saint John the Evangelist in Cambridge, Massachusetts, will stream their vigil, which begins at 7 p.m. Eastern, late into the night on Facebook.

“It will be a long night for the country; in the midst of this earthly uncertainty, we invite you to join us in watchful prayer, abiding together in the steadfastness of God,” according to the SSJE website. Diane Spiteri clutches her absentee ballot before dropping it off at the city clerk’s office in Warren, Mich., Wed, Oct. 28, 2020. “I just can’t wait until the whole thing is over. And I think it’s long from over, even after Tuesday. There’s just so much anxiety,” said Spiteri, who cast her ballot last week for Biden. As the traditional Election Day closes in, Americans are exhausted from constant crises, on edge because of volatile political divisions and anxious about what will happen next. (AP Photo/David Goldman)

T’ruah, which has long mobilized rabbis for political and social justice protests, is also hosting a late-night virtual service starting at 8 p.m. Eastern on Zoom that is modeled after the Tikkun Leil Shavuot, when Jews stay up all night studying Torah on Erev Shavuot.

“We likely won’t have clear election results on the night of November 3, but we can gather to support each other as we begin to see the emerging picture,” according to the T’ruah website.

A number of faith-based activist groups have also put together resources for Election Day.

That includes the Poor People’s Campaign: A National Call for Moral Revival, led by the Rev. William Barber and the Rev. Liz Theoharis, asking people to ring a bell, light a candle and say a prayer when polls open in their communities, then join the organization for a virtual service at 9 p.m. Eastern.

The Activist Theology Project is creating space to gather at the end of the day with two Zoom offerings: a room for watching and discussing election returns as polls close and a “somatics” room leading participants through gentle, grounding movements.

Jewish Voices for Peace has curated morning rituals throughout the week on Zoom, a number of virtual activities on Election Day and a “virtual care kit” with links to songs, poems and yoga practices, among other things.

Finally, Sing! The Center for Congregational Song is hosting a 12-hour virtual concert from 1 p.m. Eastern Tuesday to 1 a.m. Eastern Wednesday (Nov. 4) called “Vote then Sing.” It features a lineup that includes songs of the Black church, sacred social justice songs, hymns of peace and comfort and appearances by groups like Music that Makes Community — most, but not all, from Christian traditions.

After voting, there’s little to do but sit and watch election returns on the news, which can be a source of angst, according to Brian Hehn, director of the center.

“I thought the least we can do, or maybe the best thing we can do, is provide a refuge from that so that people can kind of turn their gaze toward God and find some solace and some peace in the midst of all of this — not to escape from the work that needs to be done, but while we have to wait, how can we be a source of peace?” Hehn said.

He said he hopes the daylong broadcast will be a place where everybody will be able to come together and to find rest.

After all, he said, “If we can’t sing together, then, man, we’re really in bad shape.”