WASHINGTON (RNS) — After more than a year of campaigning, the 2020 election is finally upon us, pitting Democrat Joe Biden against President Donald Trump.

It has been an unusually faith-focused campaign season, with both candidates repeatedly appealing to religion and religious voters over the past few months — albeit often in very different ways.

But as the final votes are counted tomorrow — and possibly throughout the week or longer — here are some religion-related trends to watch.

Black Protestants reliably skew toward the Democratic Party, and their votes have proven to make or break past campaigns: In 2017, Black religious voters spurred to the polls by their churches were credited with helping Doug Jones’ unlikely win to become the first Democratic senator from Alabama since 1997, defeating the Trump-endorsed Roy Moore. Black religious voters also played a key role in elevating Joe Biden to the Democratic nomination this year, helping hand him a decisive victory in South Carolina and across the South on Super Tuesday.

Although Black voter turnout dipped in 2016, this year Black religious groups have ramped up efforts ahead of Tuesday’s election to mobilize their congregations and to safeguard against voter suppression aimed at African Americans. Democrats appear to be taking these initiatives seriously: On Sunday, Biden spoke at a “Souls to the Polls” drive-in rally aimed at Black churchgoers in Philadelphia.

American Muslims don’t constitute a huge percentage of the U.S. electorate, but they have a sizable population in the swing state of Michigan, where Trump just barely won in 2016.

Trump has made some gains with the group since 2016 — particularly among white Muslims — with 14% reportedly willing to back the president this year compared to just 4% in 2016. But the poll was conducted during the early stages of the pandemic and before the end of the Democratic primary season. And even with those shifts, Muslim Americans still reported one of the lowest levels of support for Trump among most major religious groups.

As such, a surge of Muslim voter mobilization in Dearborn and nearby Detroit could bode well for Biden this week.

Jewish turnout in Pennsylvania and Florida

This is disappointing to the Trump camp, which hoped to capitalize on the president’s recent diplomatic successes that gained Israel recognition from Arab states, part of a concerted effort to win over a group that leans heavily Democratic. With sizable Jewish communities in closely fought states such as Pennsylvania and Florida, even a small defection to the GOP could help swing a state into the Trump column.

Shifts among white mainliners and Catholics in the Rust Belt

Trump’s coalition won in all three major categories of white Christians in 2016 — white evangelicals, white Catholics and white mainline Protestants — and secured the largest level of support from white Catholics (60%) of any candidate in at least two decades.

But Trump’s favorability ratings among white Catholics — which have sizable populations in Rust Belt swing states — has fluctuated throughout his presidency. More recent polls have pegged Trump’s support with the group below his 2016 numbers at around 52%, while Biden, a white Catholic who has repeatedly invoked his faith on the campaign trail, gained ground.

Pope Francis, right, and then-Vice President Joe Biden wave to the crowd on Capitol Hill in Washington on Sept. 24, 2015, as they stand on the Speaker’s Balcony on Capitol Hill, after the pope addressed a joint meeting of Congress inside. (AP Photo/Susan Walsh) 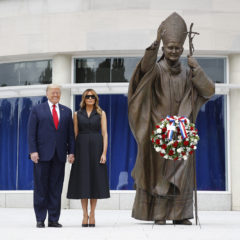 Trump’s support with white mainliners is harder to assess, as different polling outfits use different categories. But Pew Research recently reported that “white not-evangelical Protestants” have become less approving of Trump’s job performance over time, dropping from 60% in February 2017 to 53% in August 2020.

The shifts may seem small, but given Trump’s narrow margins of victory in Michigan, Wisconsin and Pennsylvania in 2016, a small shift could make a big difference.

Small but important shifts among Hispanic and Latino religious voters

Trump has surprised many analysts by increasing his support among Hispanic and Latino voters, a trend that extends to Hispanic Catholics: Fewer than a quarter of Latino Catholics voted for Trump in 2016, but Pew reported in August that one-third may back him this year. The shift appears to be at least partly due to Trump’s moves against abortion rights, particularly in the form of conservative judges appointed to the Supreme Court.

Meanwhile, Trump has made a point to reach out to a smaller but potentially impactful community: Hispanic evangelicals. The growing group is more split politically than Hispanics overall and has a presence in swing states such as Florida and Arizona. Trump launched his “Evangelicals for Trump” initiative earlier this year in a mostly Spanish-speaking Florida megachurch.

If Trump can hold on to his gains with Hispanic Latino Catholics and inspire turnout among Hispanic evangelicals, it may be enough to push him over the top in key states.

Any movement among white evangelicals

White evangelicals’ adoration of the president — and his assiduous courting of their leaders — has preserved the stunning 80% support he counted on in 2016. Trump recently told Religion News Service that he has switched his religious affiliation from Presbyterian to non-denominational Christian — an identity claimed by many evangelicals.

The Biden-Harris campaign has made efforts, however, to make a dent in Trump’s evangelical base, and a few maverick evangelicals have broken with their brethren to support the former vice president.

Trump needs white evangelicals to show up big. If they don’t, it’s a dire warning sign for his campaign. This last trend is harder to parse, but Trump has long struggled with Latter-day Saints, otherwise one of the most reliably Republican religious groups in the country.

Most Latter-day Saints will support the president this year as they did in 2016 (although he only garnered 56%, a far cry from 80% of white evangelicals). But there are two trouble spots for Trump: the sustained criticism of Utah Sen. Mitt Romney, who remains popular with Latter-day Saints overall, and the Latter-day Saints population in the swing state of Arizona, where softening has been found, and even a small shift could hand Biden the state.