(RNS) — A 66-year-old Jehovah’s Witness in Russia has received a six-year sentence for practicing his faith, a particularly harsh penalty in a country where rape is punishable with a three- to six-year prison term and kidnapping with a five-year prison term.

Yuriy Savelyev had already been in pretrial detention for two years before his sentencing on Wednesday (Dec. 16).

“Convicting Yuriy, a peaceful 66-year-old Christian, to six years in prison is patently absurd,” said Jarrod Lopes, a spokesman for Jehovah’s Witnesses. “It also defies international human rights norms, which is why the EU, U.K., U.S., and the UN have repeatedly called on Russia to stop the systematic persecution of Jehovah’s Witnesses.”

RELATED: One Jehovah’s Witness acquitted in Russia as others get months of restrictions 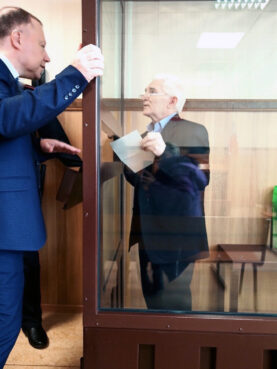 Savelyev is the fifth member of the religious group to receive a six-year sentence since the country declared the faith group “extremist” in a 2017 Supreme Court ruling.

He was “charged with organizing the activity of Jehovah’s Witnesses” when his home and those of nine other members of his faith were raided in 2018 in the Novosibirsk region of southern Russia, according to a statement from Jehovah’s Witnesses.

Lopes said Russia has raided more than 440 homes of Jehovah’s Witnesses this year.

“Undeterred even by COVID-19, Russian authorities continue to unconscionably subject harmless believers, including older men like Yuriy, to the unsanitary and potentially deadly confines of prison,” he said.

In October, another Jehovah’s Witness became the first in the group to be acquitted in Russia since the 2017 high court decision. The next day, six Russian members who had been charged for gathering for worship received suspended sentences and “restricted freedom” orders.

RELATED: Scholars call out Putin and the ‘escalation’ of persecution against Jehovah’s Witnesses in Russia

A week before those rulings, dozens of scholars from around the world called on Russian President Vladimir Putin to end the persecution of Jehovah’s Witnesses.

“It’s unfathomable that Savelyev has had to spend a single day behind bars for nothing more than peacefully practicing his faith,” said Denber, who leads the watchdog’s Europe and Central Asia division. “Russian authorities should immediately move to set aside the conviction and free Savelyev.”