SUPERIOR, Ariz. (RNS) — Waya Brown, barefoot and clad in a flicker-feather headdress and red-tailed hawk cape, waved a handful of feathers toward the ground.

Brown, who is Apache and Pomo, twirled in a circle as he blew a double cane whistle.

His father rattled a bamboo stick and sang in the Pomo language, while his aunt pounded on a deerskin drum. His sister and cousins danced in place as they all blessed the ground and those surrounding the circle.

This was the scene on Saturday (Feb. 27) at Chi’chil Biłdagoteel, known widely as Oak Flat, as the Brown family offered a prayer from the Pomo tradition to bless the Apache sacred site that’s at risk of being turned over to Resolution Copper, an Australian mining venture.

People from a number of Native American nations had come to support the Apache people in their fight to save Oak Flat: Pomo from Northern California; Navajo, Akimel O’odham, Tohono O’odham and Piipaash people from Arizona; as well as other Native American tribes.

Wendsler Nosie Sr., former chairman of the San Carlos Apache Tribe and leader of Apache Stronghold, a grassroots group opposing the land transfer, said it was important for the public to realize the significance of what was happening that day. The fact that different Native groups were gathering this way was a reminder of how in the past, “all the tribes came together in prayer and in song.”

Wendsler Nosie Sr., leader of Apache Stronghold, addresses supporters of Oak Flat, including people from other Native American groups and runners who participated in a protest run in support for Oak Flat, Saturday, Feb. 27, 2021, near Superior, Arizona. RNS photo by Alejandra Molina

“That’s when we were so strong against the person named Lucifer because the Indian people were together. We prayed together,” Nosie told the crowd of supporters.

In this case, Nosie said, the evil is the capitalism embodied by the Resolution Copper project.

But the fight to protect Oak Flat isn’t just an economic or political or legal battle. Instead, Nosie has referred to it as a “holy war” in defense of the land, a 6.7-square-mile stretch within Tonto National Forest. The area is east of Phoenix and not far from several reservations, including the San Carlos Apache Reservation.

“Some have compared it to Mount Sinai for the Jews. It’s like a central channel between the creator and the Apache, and there’s a lot of religious practices that must take place in Oak Flat,” said attorney Luke W. Goodrich of the Becket Fund for Religious Liberty, which is representing Apache Stronghold in its legal battle to protect the site.

The Apache believe Oak Flat is a “blessed place” where Ga’an — guardians or messengers between the people and Usen, the creator — dwell, according to an emergency legal motion to stop the transfer filed last week by Apache Stronghold.

“Only there can their prayers directly go to (the) creator,” it reads.

The motion, which was denied Friday (March 5) by the United States Court of Appeals for the Ninth Circuit, details how the Apache have lived on, worshipped on and cared for the land since “before recorded history.” They continue to gather medicinal plants and hold a number of important ceremonies there, it said. 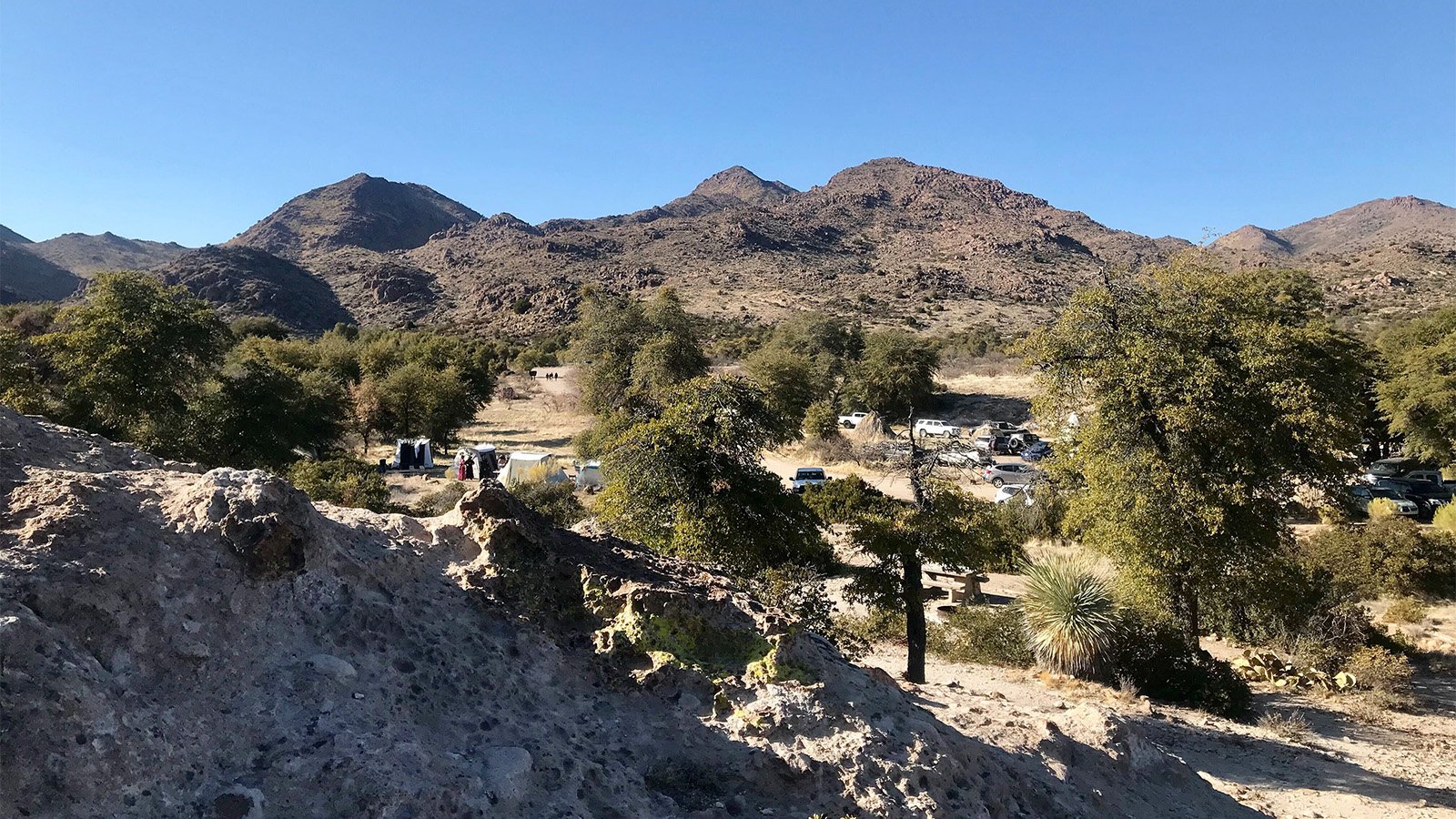 The transfer of the land to Resolution Copper was approved by Congress in 2014 as part of the National Defense Authorization Act in exchange for 6,000 acres elsewhere. And Resolution Copper says on its website it is “committed to preserving Native American cultural heritage while developing partnerships and bringing lasting benefits to the entire region.”

It continues, “We know and appreciate that the Oak Flat campground holds great significance to some members of the Native American community, including the San Carlos, Apache, Hopi, and Gila River Indian Community. If we proceed with developing the project, the Oak Flat Campground will remain open for as long as it is safe, which is expected to be at least for the next few decades.”

But the campground is a small part of the site that’s considered sacred. And mining ultimately would collapse and destroy Oak Flat, according to opponents.

The land transfer was delayed earlier this week when the U.S. Forest Service withdrew its final environmental impact statement for the site, which would have allowed the transfer as early as March 11. The agency said it needs more time to understand the concerns raised by the Apache and other Native peoples. 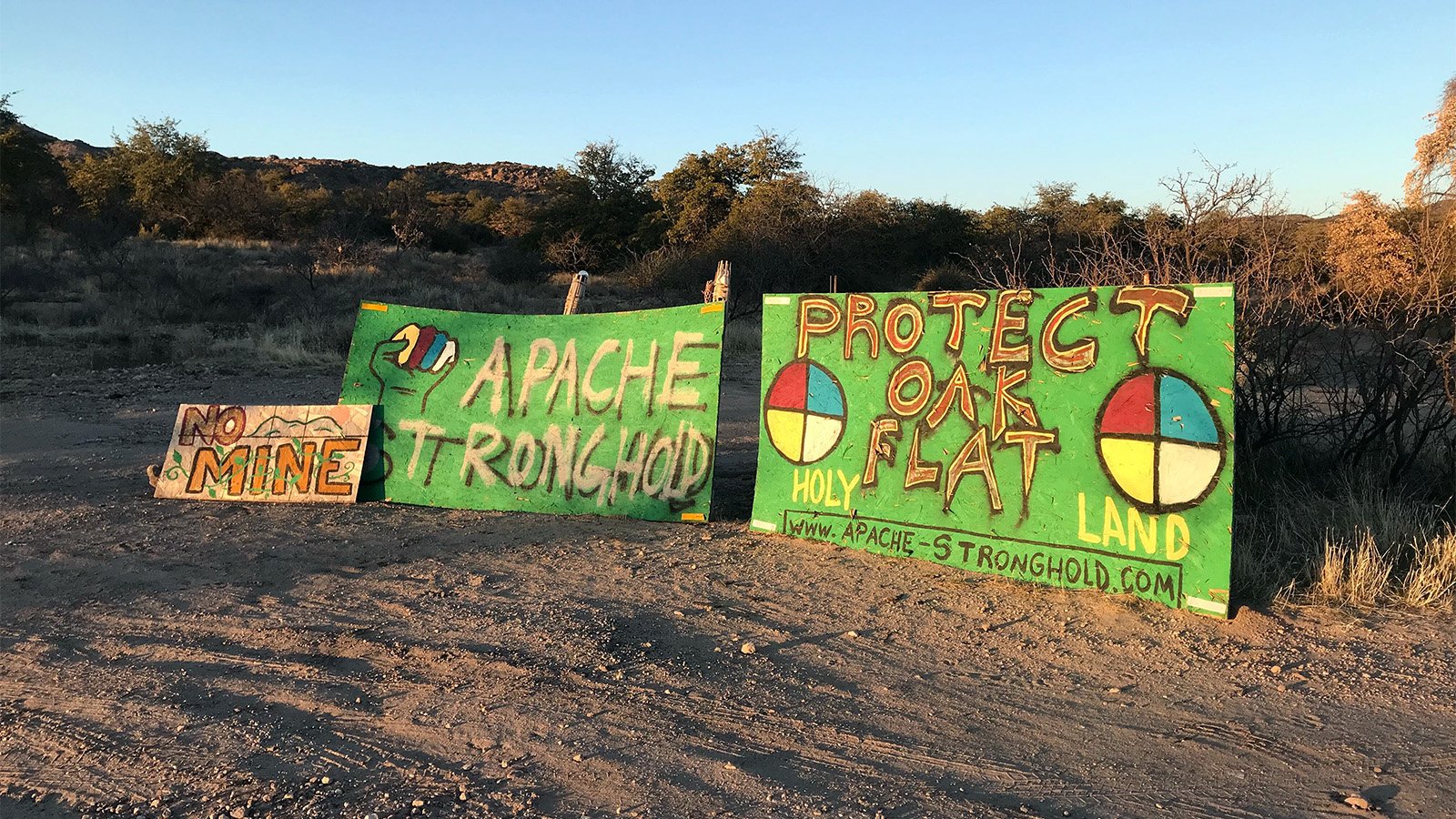 Nosie said the fight over Oak Flat underscores how Indigenous religious places are “under attack.” He also argued that if this transfer goes through, there will be negative repercussions impacting Christians and other religious groups.

“How can they perform and do their religious beliefs, when the oldest religion of this part of the world is being killed?” he said.

Some leaders of other faiths have spoken out in support of Nosie’s efforts, most prominently the Rev. William J. Barber II, president of Repairers of the Breach, a constitutional advocacy group. The organization gathered more than 90,000 signatures on a petition urging lawmakers to protect the land.

The Rev. Carol Rose, a pastor at Shalom Mennonite Fellowship in Tucson, Arizona, also recognizes Oak Flat as sacred land. Rose believes in finding God in the “thin places” and visits Oak Flat at least once a month. She was there on Saturday as Native groups danced, sang and offered blessings at the Oak Flat campground.

“I think all land is sacred. All of creation is sacred. All of us are sacred, but these thin places, when people pray and serve and heal and honor God in a place over the centuries, it’s like that connection is tended with such care, that it grows and it deepens and we get better access,” she said. 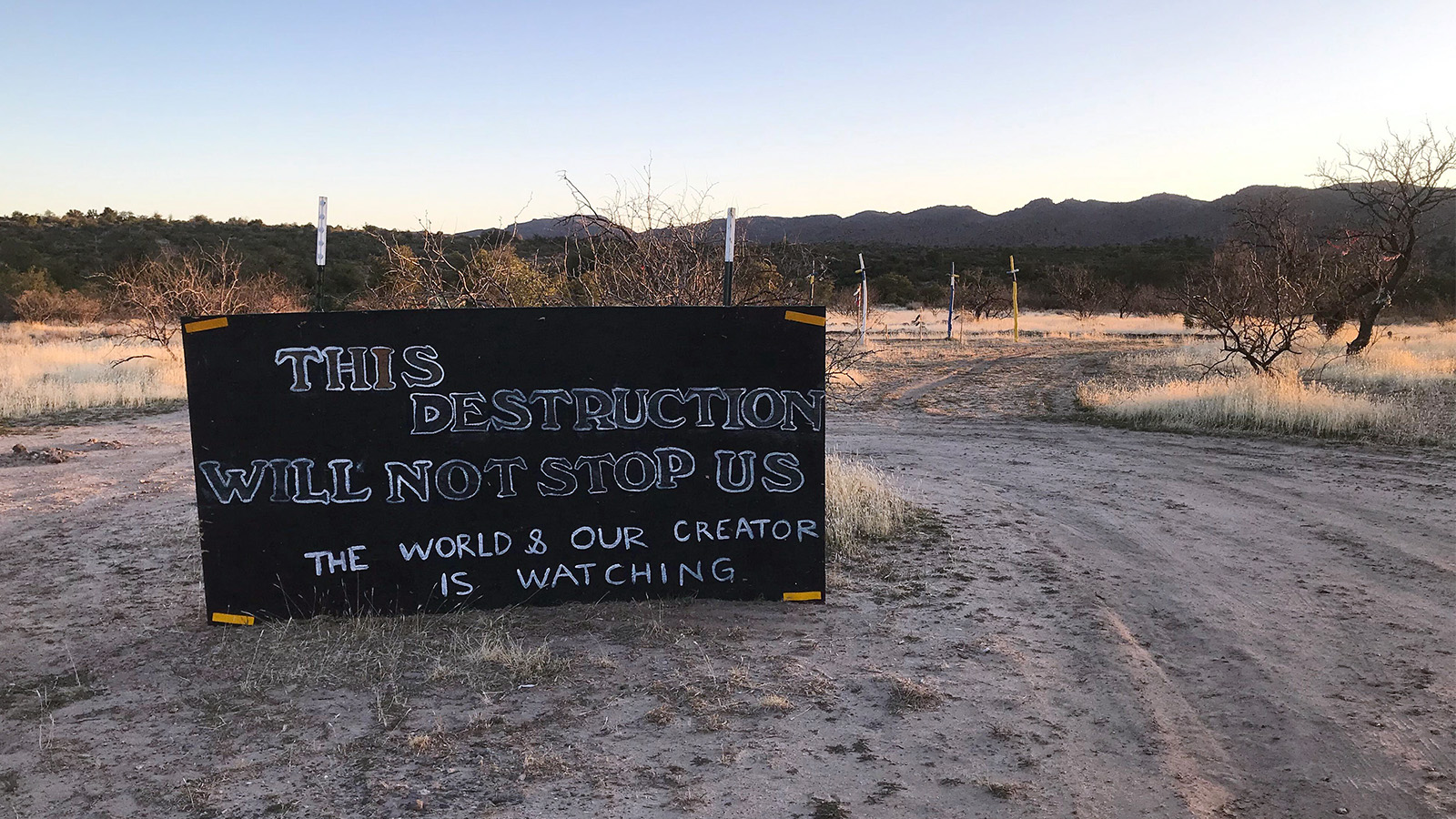 The pastor is part of a group of Anabaptist leaders called the Dismantling the Doctrine of Discovery Coalition, and protecting Oak Flat is one of the group’s initiatives. Her congregation often prays together for the protection of the land.

“We’re siblings in one Creator God. … Just because the Apache understand better what would be lost if this place was lost, doesn’t mean that we won’t all lose,” Rose said.

For Marina Thomas, who is O’odham, there’s life in the mountains, trees and rocks at Oak Flat. To stand in solidarity with the Apache people, she and other runners, including students from a Catholic Jesuit high school, embarked on a two-and-a-half day prayer and protest run to call attention to Oak Flat.

In groups, the runners carried a sacred staff and blessed eagle feathers gifted to them by Apache people to guide and protect them in their personal journeys toward Oak Flat. They arrived Saturday at the Oak Flat campground, where they were greeted with prayers and blessings. They came from the eastern, western, southern and northern directions of Arizona.

Thomas said she was reminded of how over the last hundred years or so, “we’ve been told that as an O’odham, the Apache are the enemy.”

Thomas, a chef, has realized the importance “of being together as human beings in this land,” since visiting Oak Flat last fall while foraging.

“If they take this land, it’s going to hurt a lot of people on a really deep level. … We believe that it has some essence, just like human beings have their own essence,” she said. 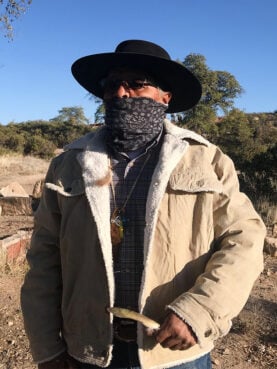 Jerry Thomas, who is Navajo, said he often goes to Oak Flat to pray to Creator. It’s where he prays for his family and asks for forgiveness. RNS photo by Alejandra Molina

For the Apache and other Native peoples, Oak Flat is like going to church. The site is a place where sunrise ceremonies are held to celebrate the coming of age of young Apache women.

It’s also where Jerry Thomas, who is Navajo, goes to pray to Creator. It’s where he asks for forgiveness and prays “about things that burden me, that burden my family,” he said.

“Can you help my family, my relatives and my ancestors?” Jerry Thomas said he prays.

Morgun Frejo, who is Navajo, sees the looming transfer as being no different than the fire at the Cathedral of Notre-Dame in Paris.

Oak Flat is where he found healing after dealing with PTSD issues. His connection to Oak Flat, he said, is “an individual journey to a sacred unity.”

Frejo said it’s not just about fighting for Oak Flat, “but for the Apache way of life, their religion.”

“I don’t see how the U.S. government can separate an Indigenous religion compared to Catholic or Mormon or Islam. We all pray to a higher being,” he said. 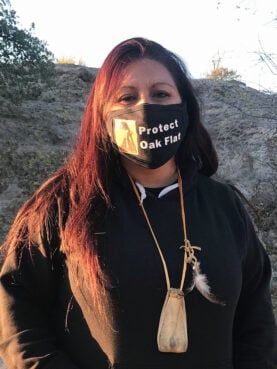 Vanessa Nosie, along with her father Wendsler Nosie Sr., has been leading efforts to stop the transfer of Oak Flat. RNS photo by Alejandra Molina

Nosie, daughter of Wendsler Nosie Sr., said, “It has a living spirit and that’s what we’re trying to protect.”

Vanessa Nosie said losing Oak Flat as a place of worship would be as if somebody murdered her and tried to replace her with someone else.

“They say there is no immediate harm, but you are harming something that is alive. You’re killing and murdering a living thing that God has created, so when that spirit is gone, it’s gone forever,” she said.