VATICAN CITY (RNS) — Over the past week, Catholic priests all over Germany have been openly defying the Vatican by blessing same-sex couples. As the Vatican struggles to answer the demands for representation and inclusivity by some factions in the church, a growing number of Catholic faithful opt for disobedience as a last resort.

The Vatican’s Congregation for the Doctrine of the Faith, or CDF for short, issued a document in mid-March that shut down proposals to bless same-sex couples. This debate is particularly active in Germany, where bishops have begun a Synodal Path together with laypeople to address the hard issues, from sexuality to clericalism, that are emptying its pews and coffers.

Blessing same-sex couples, members of the German Synodal Path argued, would be “a symbol” that could encourage LGBTQ Catholics to feel welcome and accepted in their church. But the CDF wrote in its document, signed and approved by Pope Francis, that God “cannot bless sin” and that doing so “would constitute a certain imitation or analogue of the nuptial blessing.”

According to Catholic teaching, homosexuality is an “intrinsically disordered” behavior and those who have this “tendency” must be abstinent.

German clergy have been blessing gay couples for a while, but with their latest campaign, “love wins,” they are sending a clear message to the Vatican Curia and the pope that they have no intention of backing down. The president of the German bishops’ conference, Bishop Georg Bätzing of Limburg, has attempted to cool the waters, telling local clergy to stop the blessings, calling them “unhelpful.”

But many Catholic faithful have already crossed the Rubicon and, with no intention of turning away and leaving the church, are making their voices heard in acts of defiance.

“I was appalled” by the document issued by the CDF, said the former president of Ireland, Mary McAleese, in an interview with Religion News Service. “I was appalled by its language, appalled by the very idea a Vatican document would say a gay couple is not capable of either receiving or expressing God’s grace.”

In June 2018, McAleese proudly attended the gay pride parade with her son and his partner, just as Pope Francis prepared to visit the country for the World Meeting of Families. She told RNS she deemed it “offensive” the CDF does not think Catholics could distinguish a blessing from a wedding ceremony. 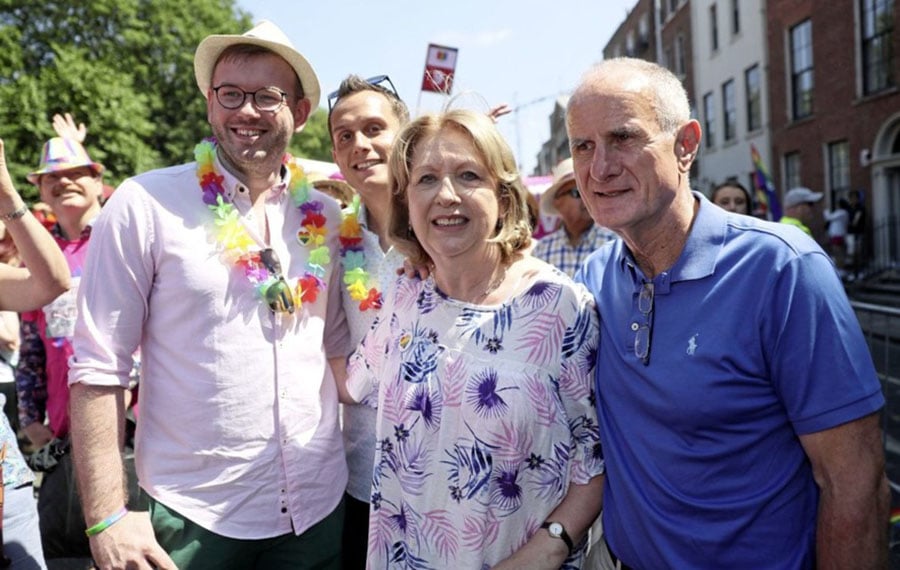 Former President of Ireland Mary McAleese, center, with her husband, Martin, right, and her son Justin, second left, and his husband, Fionan, left, during the Pride Parade in Dublin on June 30, 2018. (Brian Lawless/PA Wire)

Incidentally, the CDF document was published while Ireland celebrated St. Patrick’s Day and pastors were blessing pots of shamrocks and even household pets. “Pot plants and chihuahuas are apparently capable of expressing and receiving grace, but you as a sentient human being are not,” McAleese said. “What a load of piffle.”

On May 4, McAleese and 60 Catholic scholars, academics and theologians signed a Wingaards Institute research report, titled “Christian Objections to Same Sex Relationships: An Academic Assessment,” analyzing the mentions of homosexuality in the Old and New Testaments with today’s scientific understanding and interdisciplinary methods. Their argument is the interpretation of mentions of homosexuality in the Bible are incorrect, or in the case of female same-sex relationships, nonexistent.

“We felt a kind of scholarly critique was absolutely essential,” McAleese said. “We are very excited they are able to say emphatically, after two years of scholarship, there is nothing in the Old or New testament to justify opposition to consensual same-sex relationships.”

Signatories of the report have demanded that Pope Francis support the 35,000-word document challenging Catholic doctrine and that he set up a “transparent, independent consultation process on these findings.”

This is not the first time McAleese, a Catholic, has exercised disobedience to the Vatican. In 2018, she was barred from speaking at a conference at the Vatican on the International Women’s Day for her position on homosexuality and women in the church. Instead, Voices of Faith, a progressive Catholic group engaged in promoting female ordination and advocacy for the LGBTQ community, invited her to speak at a conference just outside the Vatican walls.

“I’ve met many people who have already left the church as a result of the church’s teaching, not just on sexuality but for women,” she said. “But this document comes from people who haven’t given up. People who believe there is something still very valuable and worth rescuing in the church.”

McAleese looks at the German Synodal Path to “lead the way,” praising it as the “intellectual powerhouse of the church.” She believes the German synodal efforts are capable of bringing to the fore the most important debates facing Catholicism today, even though their discussions will likely cause “the wrath of the CDF.”

“For intellectual power, for sheer spiritual power, for a critiquing capability that is confident and unafraid of asking difficult questions, give me the German church every time,” she said. 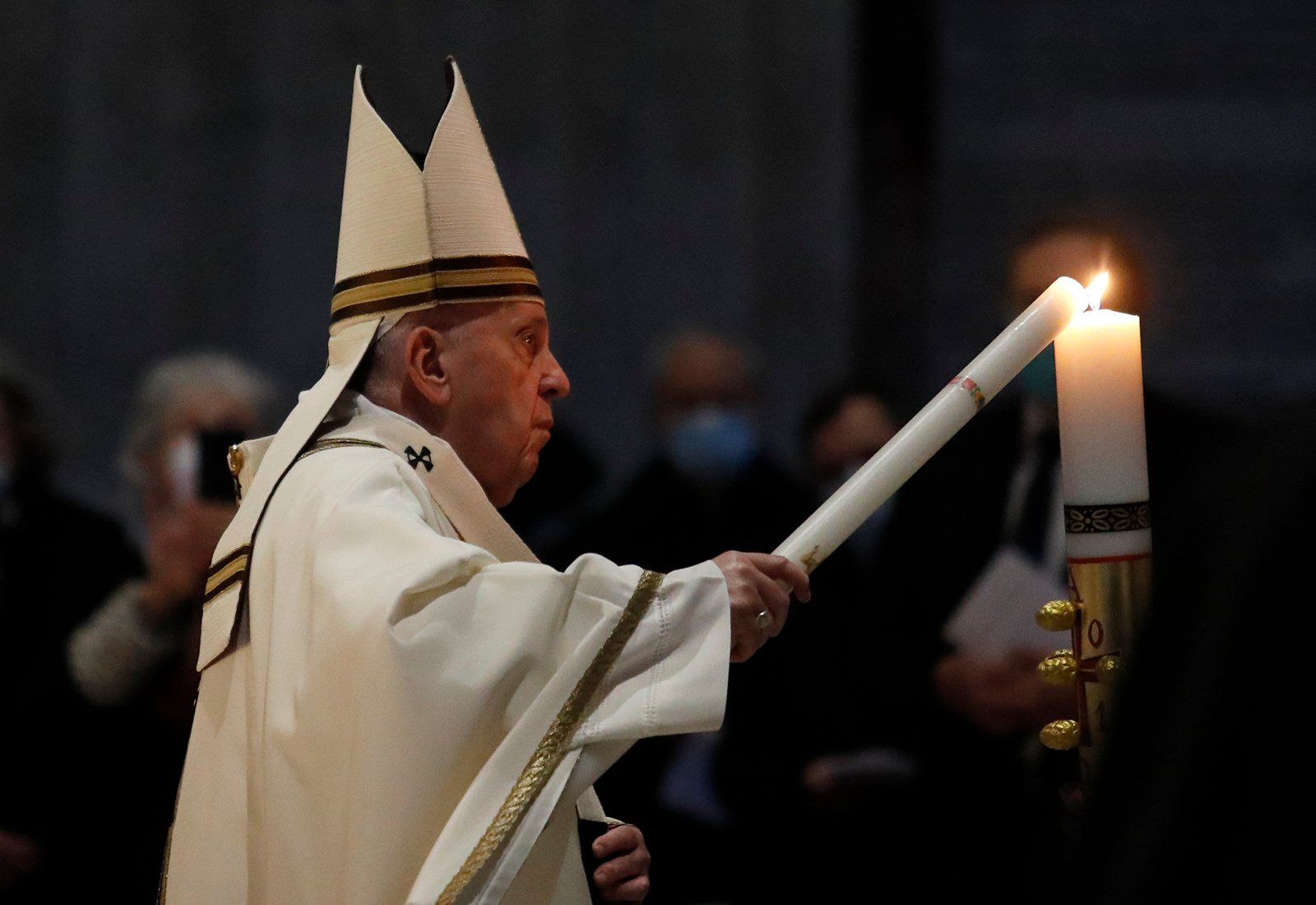 Pope Francis’ pontificate has opened the possibility for Catholic scholars to publish reports such as the one proposed by the Wingaards Institute. “Historically, the publishing of this kind of report was prohibited during the pontificate of John Paul II and Benedict XVI. It was considered an act of disobedience to the church because it presents doubts against Catholic and papal teaching,” said Polish author and theologian Krzysztof Charamsa, in an interview with RNS.

Charamsa used to be a priest working at the doctrinal office of the CDF, until 2015, when he came out as actively gay and was suspended from the priesthood and removed from his curial positions. He claims to know firsthand how the CDF, formerly the Vatican’s Inquisition office, deals with dissent.

“The first work every day was ‘schedatura,’ as we say in Italian. Schedatura means something like what the secret service does. We have archives with names of people who are in disobedience, write articles or books that we don’t like, express something in an interview that is not in favor of our position,” he said.

For Charasma, there is no distinction between what the CDF publishes and Pope Francis’ beliefs. “CDF documents are papal teaching. They are part of papal magisterium,” he said, quoting Article 18 of Donum Veritatis, a CDF document issued in 1990 when the congregation was led by the future Pope Benedict XVI.

“The documents issued by this Congregation, expressly approved by the Pope, participate in the ordinary magisterium of the successor of Peter,” the CDF document states.

Charasma’s coming out occurred because he understood “there was going to be no change” in church teaching on sexuality, celibacy and women during the 2015 summit of bishops on the family at the Vatican. He is convinced that if this pontificate does not enact reform on Catholic teaching, a growing number of Catholics will opt for rebellion.

“If we continue with these politics of the past eight years, it’s the perfect way to continue to have moral objection and disobedience by LGBTQ people,” he said.

According to Charasma, the sexual revolution implies the need for “historic change” from the Catholic Church, not unlike the discoveries by Copernicus or Darwin. Disobedience is only the first step by some faithful to express their malcontent, he added, but schism cannot be excluded.

For McAleese, the possibility of a schism is unlikely. It’s more likely, she said, “people will drift into a nominal Christianity,” adding that with the COVID-19 pandemic, faithful have been shown “just how easy it is, with online services or no services at all.”