On Tuesday (June 15), the messengers to the Southern Baptist Convention denied ultraconservative agitator Mike Stone the presidency of the denomination, narrowly electing Ed Litton, a pastor from Alabama.

But the 2021 annual meeting that ended Wednesday did little to dissuade anyone of the SBC elite’s obsession with power, its insensitivity to the experiences of women and minorities, and lack of self-examination.

These were problems in the SBC before Donald Trump, but the 45th president of the U.S. played white evangelicals like a fiddle, extracting their unwavering discipleship at ever higher costs to their integrity and encouraging their worst impulses. Now, a generation after moderates were mercilessly purged from the denomination, the victorious conservatives battle over whether they should move forward or further rightward.

Some outlets referred to Litton, who narrowly bested Stone on the second ballot, as a moderate, but thinking he is anything other than a strident theological conservative reveals just how dramatically to the right the goalposts keep shifting.

True, Litton’s election offers hope that the SBC might avoid some of its worst impulses: Stone peddles delusions about the denomination drifting leftward to justify alienating women and Black members, while Litton has championed racial reconciliation. But Southern Baptists should mourn what has already been lost. Growing numbers of women and people of color have one foot out the door, and several prominent, praiseworthy leaders have already left. 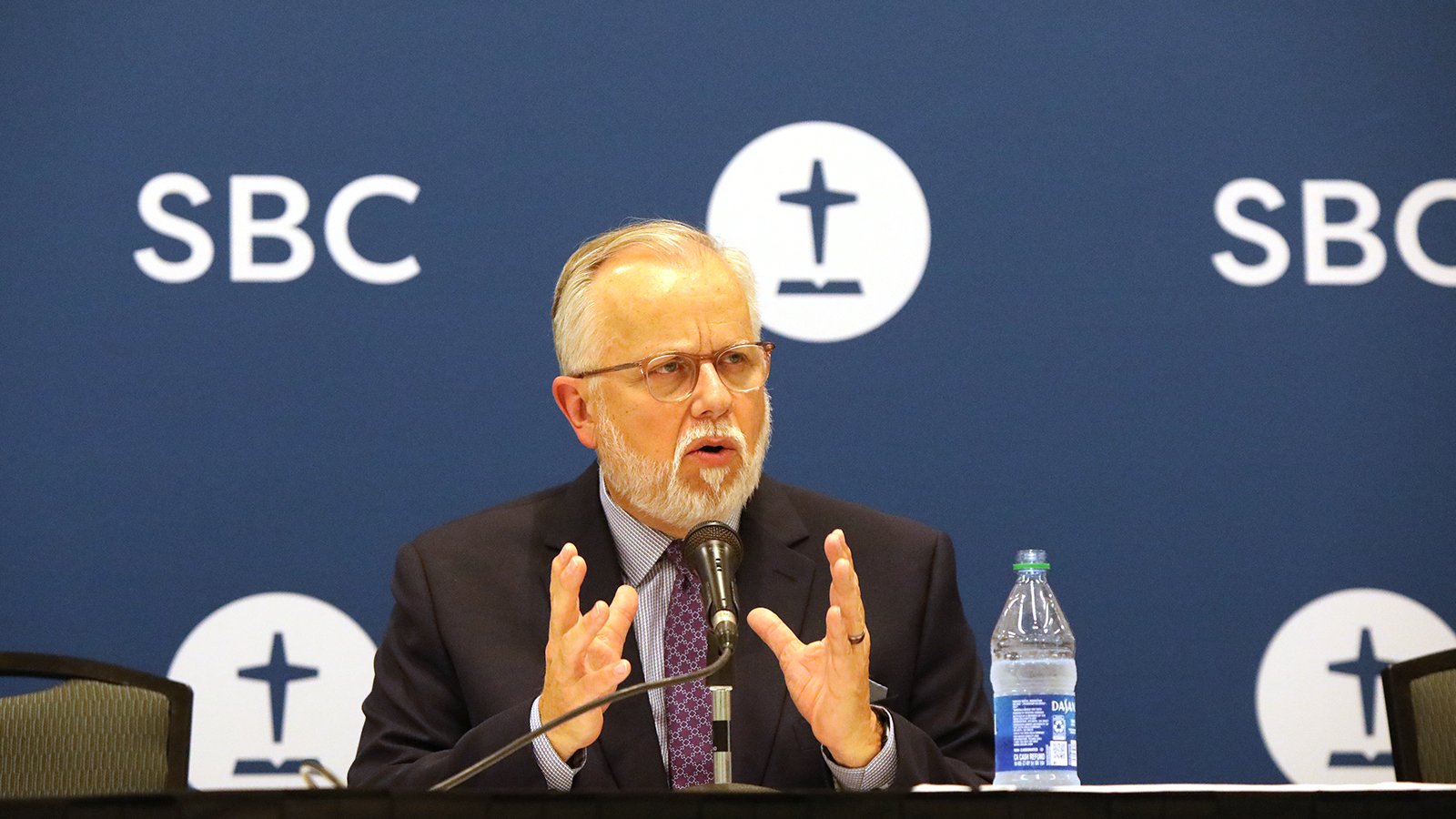 The Rev. Ed Litton speaks during a news conference following his election as the next president of the Southern Baptist Convention, during their annual meeting, Tuesday, June 15, 2021, in Nashville. RNS photo by Kit Doyle

The departure that cast a shadow over the annual meeting was that of Russell Moore, who recently resigned his post as the denomination’s top ethics and public policy leader. Weeks before, a letter by Moore made public what many in the denomination knew: For years Moore had been ruthlessly harangued by good-old-boy insiders for his advocacy for racial reconciliation, his insistence on justice for sex abuse survivors and his consistent opposition to the plainly disqualifying aspects of Trump’s character, rhetoric and policies.

The letter, and audio that followed to back it up, also gave a glimpse of the SBC’s culture of secrecy and institutional protectionism. Comparisons to a cartel would be overwrought, but I have often thought of the Southern Baptist hierarchy as a jobs program and a money racket for the compromised. It seems that way now more than ever. No one can talk to the press without fear of losing his job. And career success often depends more on loyalty than integrity.

In a Washington Post article after Moore walked away, an anonymous Southern Baptist complained that Moore used to deride people who left the SBC after it invested in and cultivated them. The implication was that Moore had done likewise, forsaking his Southern Baptist heritage and formation to make a buck elsewhere in the Protestant world.

This is a ludicrous insinuation that would be comical if it were not so cowardly and intellectually dishonest. Moore gave much more to Southern Baptists than he took, championing Hobby Lobby’s challenge to the federal government’s contraceptive mandate and emphasizing traditional marriage and protecting unborn human life. But he also spoke out on sexual abuse, race and topics, such as immigration reform, that Baptist power brokers were all too happy to move away from as they embraced Trump. Early in the Moore era and many times subsequently, I gave Southern Baptist leaders the benefit of every doubt, defending their ideological commitments as stemming from conviction, not from animus. But since their embrace of Trump, and especially given their despicable treatment of Moore, my indulgence of them fills me with regret.

The SBC is bigger than any one man, and Litton’s election should fend off some of the ugliest potential outcomes — for now. But if a few more busloads of angry white reactionaries had shown up to vote for Stone — or if more nonwhite Southern Baptists had stayed home — we would be having a very different conversation about the future of the SBC.

RELATED: A guide to what’s at stake at the Southern Baptist Convention’s historic annual meeting

A well-loved hymn begins with the lines “We’ve a story to tell to the nations that shall turn their hearts to the right.” Turning hearts to the right, of course, echoes Jesus’ Great Commission in the Gospel of Matthew to teach and baptize.

“Turn their hearts to the right” indeed. I don’t know anymore if we are talking about the far right, the alt-right or merely the religious right. But turning to the right seems to be the only crusade the Southern Baptists have left.

(Jacob Lupfer is a writer in Jacksonville, Florida.The views expressed in this commentary do not necessarily reflect those of Religion News Service.)