(RNS) — It’s perhaps understandable that the Biden administration is afraid of Catholic bishops. Here in the United States, the bishops have been nothing but trouble for the president and Democrats in general.

That doesn’t excuse the mistake Vice President Kamala Harris made by not meeting with Catholic bishops during her visit to Central America in the first days of June. Instead, she spent her time talking to government officials and entrepreneurs, mostly aimed at improving the quality of life in their countries to keep them from going north.

The bishops could be the administration’s strongest allies in the region in alleviating the problems that force people to try to reach the United States. Both the bishops and the administration recognize that people will continue to flee the region unless something is done about the poverty, corruption and crime that are endemic to Central America.

The failure of the administration to carve out any time for the bishops or other religious leaders shows that whoever organized the trip does not understand the role of religion in the region. Central American Catholic bishops and evangelical leaders are significant influencers in their countries.

The Central American bishops are strong opponents of abortion and gay marriage, but they have also prophetically denounced exploitation of the poor and government corruption. In the 1980s, Bishop Oscar Romero and other Catholic leaders were murdered for their defense of the poor. Their heirs are potential allies who should not be ignored in the administration’s plans for the region.

What’s more, Harris would have been welcomed by the bishops. “We value the effort of this administration in contrast with the previous one,” Salvadoran Bishop Oswaldo Escobar told Catholic News Service. “We see the visit as something positive because the goal is to help.”

In meeting with the bishops, the vice president would have gotten a briefing from pastors who know what their people are experiencing, and she in turn could have briefed the bishops on U.S. plans.

Both sides would have gained public credibility from such a dialogue. The United States is still suspect in Latin America, and episcopal recognition would go a long way to allaying suspicions. The U.S. would also do well by strengthening the position of the bishops and other religious leaders who are often the only ones who can hold their governments accountable. 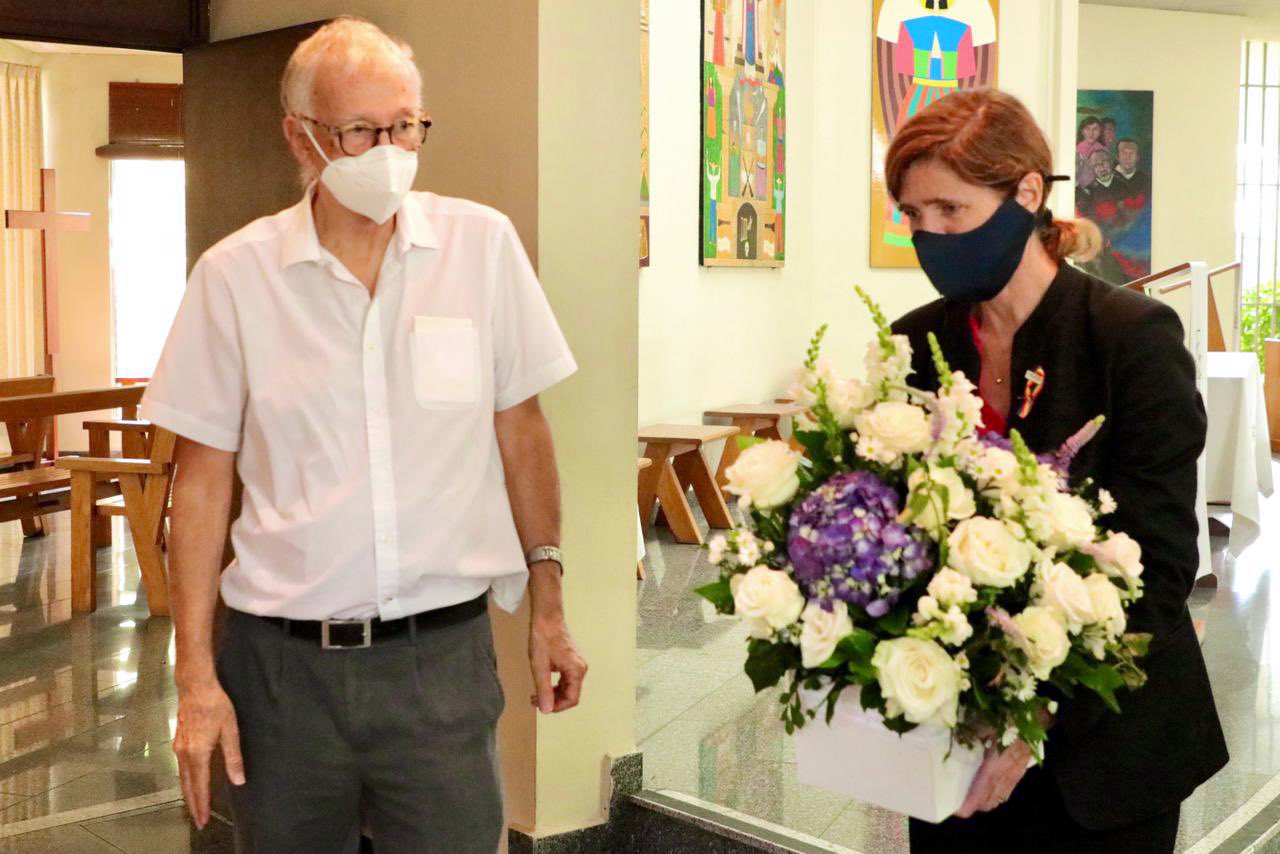 Samantha Power, director of the U.S. Agency for International Development, visits the chapel at the University of El Salvador on June 15, 2021, where six Jesuits, their housekeeper and her daughter were murdered by soldiers during the 1989 civil war. Photo via Twitter/@PowerUSAID

Needless to say, a photo of Harris meeting with Central American bishops would also have helped the administration politically when the U.S. bishops are attacking Biden.

What Harris would have heard is evident from the public statements made by bishops prior to her visit, as reported by Catholic News Service.

“Irregular migration is the product of a failed economic and political system, which has not given priority to the solution of the structural causes that give rise to these migrations,” said the Guatemalan Episcopal Commission for Human Mobility in an open letter to Harris before her visit.

The neighboring Mexican bishops, whose country has borne the brunt of Central American migration for the past few years, said, that the “best policy” is following the example of the good Samaritan, when “we take care of the weakest and most wounded in our societies, eliminating their dependencies and slavery, creating opportunities so that they can be more and more protagonists of their own destiny.”

This is in line with the Biden administration plans to devote $4 billion in aid to the area to create jobs and respond to poverty and climate change. The problem is that much of U.S. aid to Central American governments is siphoned off by corrupt officials.

On the other hand, aid given through Catholic organizations, Catholic Relief Services, actually reaches the people.

The administration missed an opportunity during Harris’ visit to Central America. On the other hand, the new USAID director, Samantha Power, went out of her way to visit the site where six Salvadoran Jesuits, their housekeeper and her daughter were murdered at the University of El Salvador.

At least part of the administration got it right.

Opinion
Faith-based NGOs are helping Ukraine’s children. Now we have to prove it.
Follow us on Facebook!
Submit your photos to RNS