LOS ANGELES (RNS) — On a recent Sunday, about 10 people sat outside the steps of the boarded-up First Baptist Church of Venice, a century-old congregation that, to many, remains a symbol of the thriving Black population that once existed in the seaside town of Los Angeles.

They discussed potential uses for the church that would benefit the community. It could reopen as a library to highlight the Black history of the Oakwood neighborhood, some suggested. Maybe it could host coding classes for kids or serve as a space for interfaith gatherings. They also shared childhood memories of the church and lamented the forces transforming Venice from a working-class and bohemian artist enclave to a wealthy neighborhood. They bemoaned the new geometric boxed houses lining the streets — houses they said feel out of character with the area.

This isn’t an official meeting. It’s not a church service or a demonstration. It’s more like a weekly teach-in they hold to let the public know about the significance of this church — and to make it clear they’ll continue gathering until the sacred building, which they fear could be a casualty of Venice’s changing landscape, is turned over to the community.

Their nearly four-year effort appears to be making headway as the Los Angeles Cultural Heritage Commission in June voted in favor of designating First Baptist Church of Venice, and the adjacent parking lots, a historic cultural monument.

Now, the city’s planning and land use management committee will vote on the issue in September before it goes to the Los Angeles City Council for a final vote. 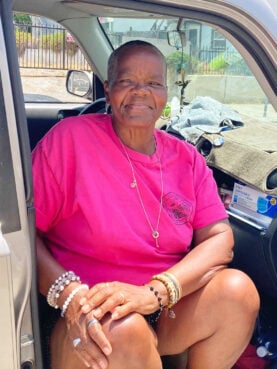 “It’s about time something moves in our favor, because they try to act like we never lived here,” said Laddie Williams, a lifelong resident of Oakwood.

Williams was enraged when she learned in 2017 that First Baptist Church of Venice had been sold. She knew she had to do something, so she sat in protest outside the church, on the steps her grandfather and his sons poured concrete on, helping put the finishing touches in the late 1960s. Williams has been sitting outside the church since learning of the sale.

Founded in 1910, First Baptist Church of Venice corresponded with the area’s evolution as an early enclave of Black residents, and as it outgrew its initial locations, members in the late ’60s helped build the church building that still stands in Oakwood — the only area near the beach where Black people were allowed to historically buy property in LA.

The church served the area’s Black and Latino residents until 2017, when then-pastor Horace Allen, citing a shrinking congregation, moved the congregation and sold the church for $6.3 million to Jay Penske, whose Penske Media Corporation publishes Rolling Stone and Variety magazines. Penske, who couldn’t be reached for comment, planned to convert the church into a home for his family, with a rooftop deck and four-car garage.

Neighbors like Naomi Nightingale were stunned, referring to Penske’s plans as “sacrilegious.” Activists attribute the gentrification of Venice to gang injunctions that caused Latino and Black people to leave the area and cite the tech boom for rising housing prices. The church, residents say, served as a respite to these kinds of issues.

Bishop Elmer Lawrence Holmes, who led the church for more than 40 years, mentored youth and residents impacted by gang violence and injunctions. Residents remember him organizing peace marches around Venice and representing the interest of his neighbors in local planning committees. He’d advocate for traffic safety measures and regular street cleaning. “His leadership, insistence on good character and proper behavior extended beyond the Church in the examples of principles repeated and demonstrated through dedicated parishioners,” the city wrote in a report. 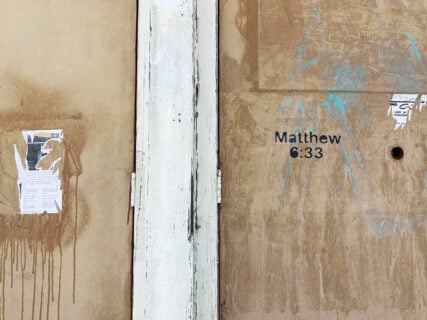 Matthew 6:33 etched on the boarded-up entrance of the church. RNS Photo by Alejandra Molina

“We just could not allow it to fall into the hands of someone who didn’t have the religious respect of the community,” said Nightingale, who learned of the sale after seeing Williams sitting on the parish steps.

Nightingale interviewed several Oakwood residents, including those who were part of the church, to learn what the community and the building meant to them. She asked: “How would you feel if you drove down the street and the church wasn’t there?”

Herman Clay, a deacon at the church, told her: “How would people in Hollywood feel if they woke up one morning and they could not see the Hollywood sign?”

“It took four years, but we were relentless,” said Nightingale, a professor and Oakwood resident. “We’re still fighting because we still know that they haven’t given up.”

In late 2020, the church property was sold again, this time to Lee Polster, who in a June community meeting said he planned to “retain” and “reuse” the church and turn the adjacent parking lots into a mixed-income housing project. Polster said the historic designation wasn’t necessary because he planned to rehabilitate the church “while being mindful of the cultural importance of the church building.” 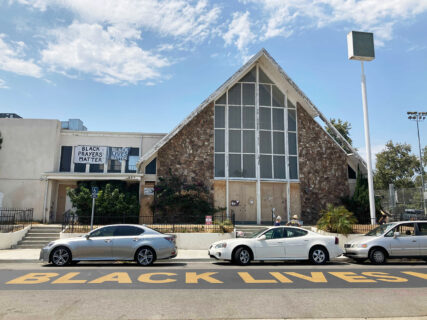 Residents of Venice are seeking to preserve the boarded-up First Baptist Church of Venice. The century-old congregation is a symbol for the Black residents that lived in Oakwood, the only area near the beach where African Americans were historically allowed to buy and own property. RNS photo by Alejandra Molina

Outside the church, a “Black Prayers Matter” banner hangs from the top floor. On the entrance, “Matthew 6:33” is etched on the boarded-up doors. In giant letters, “Black Lives Matter” is painted in the middle of the road in front of the church.

The push to preserve the church building gained momentum after the police killing of George Floyd, when anti-police brutality protests in support of Black Lives Matter were held in Venice. In a protest last June, even Ben Affleck was photographed holding a “Save First Baptist Church of Venice” sign.

In recent months, other L.A. spaces tied to religion have been deemed worthy of preservation, such as the former Hollywood art studio of Corita Kent — a Roman Catholic religious sister known for her pop art covering racism, poverty and misogyny — and the Church of the Epiphany — which in the 1960s became a center for the flourishing Chicano movement.

Many pushing to preserve First Baptist Church of Venice, who are part of the group Save Venice, trace their involvement to seeing Williams sitting outside the church. Growing up in Venice, Williams remembers a diverse and tight-knit neighborhood that looked out for one another. When Japanese residents were sent to internment camps, Williams said her grandfather saved their homes by putting the residences under his name. Her grandfather, like many others, came to Venice from the South in the early 1900s to work as laborers, service workers and servants. They helped build churches, housing and the Venice Canals.

Now, the coalition to save the church seems as diverse as Williams remembers her neighborhood. Supporters include nonreligious, Indigenous, Black, Latino and white people.

Among them is Ingrid Mueller — who decades ago helped secure historic status for a midcentury apartment complex in Venice amid demolition plans and eviction notices — and Jon Wolff — an artist and writer who has kept residents updated “by making sure this story never dies down” in the local Free Venice Beachhead community paper.

To Wolff, who was born and raised in Venice, the church was “always here and you didn’t expect it to not always be here,” adding the building “represents the whole story” of displacement in Venice.

For Stephanie Serra, a nonreligious person who was raised Catholic, it was important to put her complicated feelings about religion aside in advocating for the church space.

“With everything that happened last year with the protesting, I just sort of realized that I’m not here to fight for a church,” Serra said as she sat on the steps of the church on Sunday (July 11). “I’m here to support the community and support maintaining what’s left of the Black history that is so crucial to the development of Venice and to everything that it is today.”

For Lydia Ponce, an Indigenous activist whose Venice house served as the West Coast headquarters for Standing Rock, the struggle to preserve the church is personal. That’s why she’s there on Sundays.

“As an Indigenous person sitting here, who wants to protect it … we know what it feels like to have something sacred taken from you,” Ponce said. “I’ll do anything and everything I can to save their sacred space.”