WASHINGTON (RNS) — As police escorted a demonstrator in a wheelchair away from the chanting throng descending on the Capitol Monday (Aug. 2), fellow protesters turned to watch the person go. The group paused for a moment, then altered their call.

They screamed in unison: “Thank you! We love you!”

It was a moment that played out again and again over the course of the afternoon. According to Capitol police, more than 200 faith-led demonstrators were arrested while praying, singing and protesting in the street, hoping to draw attention to voting rights and a slate of other issues participants argued impact the poor and low-wage workers. 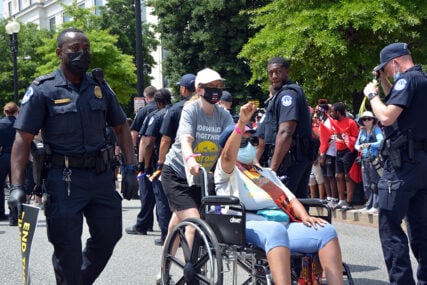 The sprawling demonstration was organized by the Poor People’s Campaign, an advocacy group led by the Rev. William Barber II and the Rev. Liz Theoharis that tends to support left-leaning policies. Monday’s action on the Hill constituted one of the largest mass-arrest nonviolent protests at the Capitol in recent memory and attracted an array of prominent voices, including civil rights icon the Rev. Jesse Jackson and Luci Baines Johnson, the daughter of late President Lyndon B. Johnson.

At a rally near the Capitol immediately before the march, leaders laid out what they insisted were interconnected issues driving their protest, which centered on voting rights, immigration reform, a $15 an hour federal minimum wage and eliminating the Senate filibuster that has stymied passage of related federal legislation.

“Filibuster is a sin!” Barber declared. “Making essential workers work during a pandemic — and risk their lives to save this country — and then not give them a living wage is sin.”

The event also featured music. Singers led the crowd in belting: “Somebody’s hurting my brother, and it’s gone on far too long. And we won’t be silent anymore!” The singers changed the lyrics as the song progressed, inserting lines such as “Somebody’s stealing our wages!” and “Somebody’s blocking our voting rights!” 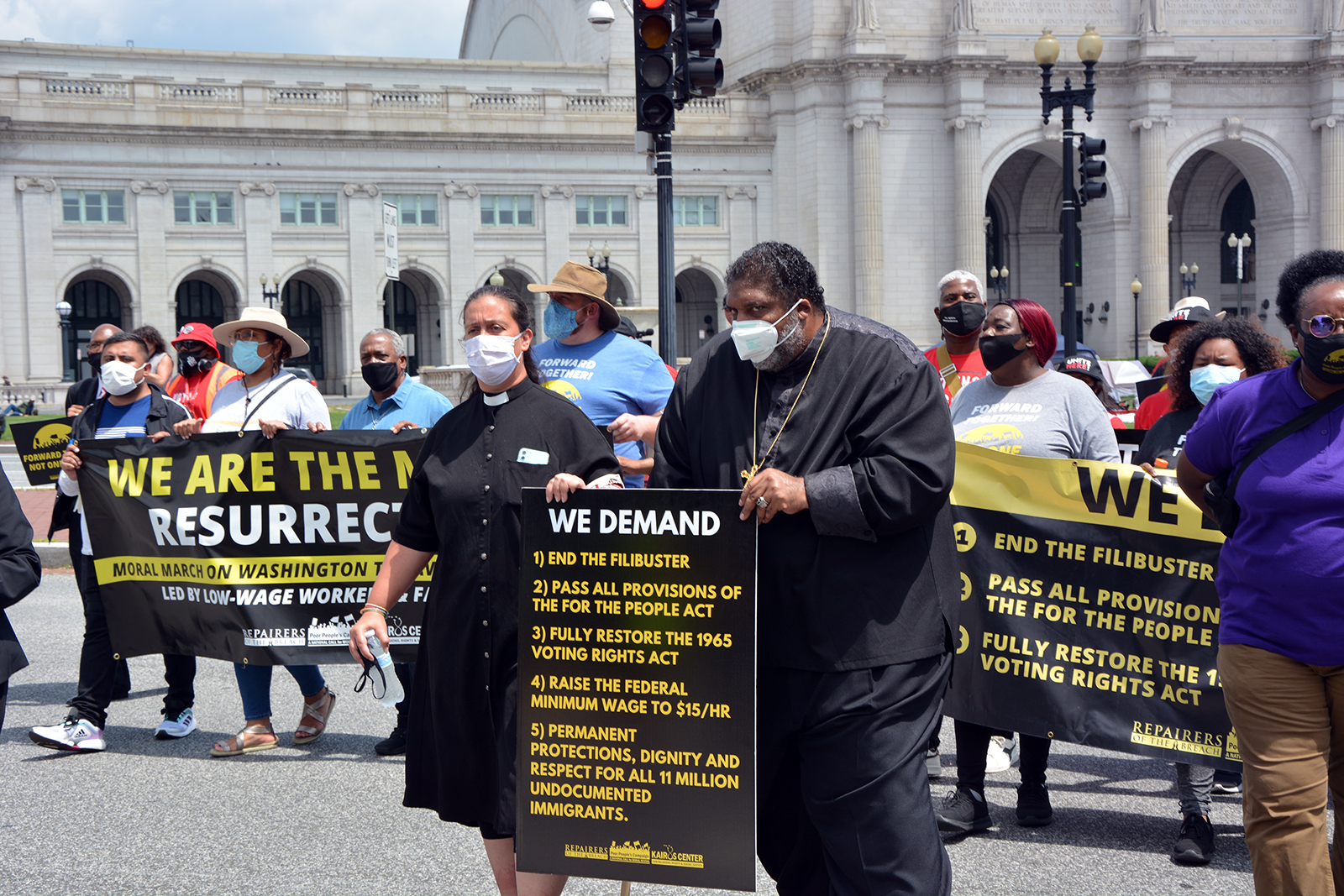 The song echoes the sweeping, evolving agenda articulated by a variety of faith leaders across the country in recent months, particularly those who operate within religious communities of color.

The Poor People’s Campaign took a leading role in propelling that agenda this summer in the wake of Republican-led efforts to pass state-level elections bills many activists decry as restrictive. Indeed, Monday’s march follows what organizers called a “season” of similar demonstrations organized by the PPC over the past two months in Washington, Arizona and most recently Texas, where activists mimicked the 1965 civil rights march from Selma to Montgomery, Alabama. The group walked 27 miles from Georgetown to Austin, Texas, in late July to oppose voting restrictions.

Texas pastor the Rev. Frederick Haynes III, who joined the Texas march and has vigorously opposed state elections bills, was among the speakers at the Washington rally.

“President Biden, Democrats and Republicans, the culture will put it like this: If you come for us and we didn’t send for you, you don’t want this smoke,” said the Progressive National Baptist, whose denominational convention is happening this week. “You don’t want this smoke because we are fighting for the soul of this nation.”

The activists’ efforts have hit roadblocks with some Democrats at the national level, particularly Sen. Joe Manchin of West Virginia and Krysten Sinema of Arizona. Both opposed efforts to pass minimum wage increases and eliminate the filibuster this year — in Manchin’s case, despite a meeting with Barber and low-wage workers. The Poor People’s Campaign has since targeted both lawmakers with protests. 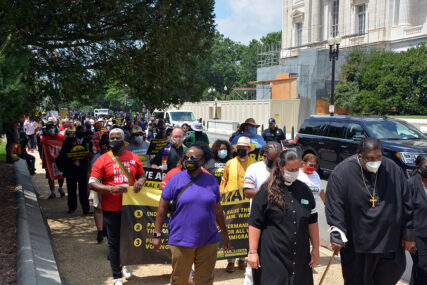 Barber was quick to harangue members of both parties during the rally, accusing some Democrats of heaping praise on late civil rights icon Rep. John Lewis but failing to support his vision for voting rights.

“Some Democrats told us: ‘If y’all organize, don’t connect wages to voting rights,’” Barber said. “I’m too old to play that.”

Barber also offered his own adaptation of the Scripture passage from Isaiah 10:1-3:

“Woe unto you hypocrites who pay attention to all of Robert’s Rules (of order), all the made up rules of the Senate and the House, but you filibuster justice. And filibuster mercy. And you filibuster faithfully.”

Barber was briefly joined at the rally by Sen. Raphael Warnock, himself a prominent Georgia pastor. However, Barber explained Warnock would not speak because the campaign generally does not let politicians address their protests. Warnock is a champion of the For the People Act, a federal voting rights legislation Barber and others praised but Manchin opposed.

Among the clergy milling about the crowd — which also included many red-shirted members of the labor union Unite Here! — were the Rev. Patrick Messer, a United Church of Christ pastor who just left a church in Nebraska, and the Rev. Deana Oliva, a Unitarian Universalist minister from Kentucky.

Asked what spurred them to be part of the protest, Oliva was aghast at the thought of not participating — “Where else would we be?” — and Messer pointed to Jesus.

“I’m here because in Jesus’ first sermon he said the spirit is upon me to bring good news to the poor, and to bring deliverance to the captive,” Messer said. “We’re here to bring a $15 minimum wage to all workers, restore the Voting Rights Act of 1965 and pass all the provisions of the For the People Act and end the filibuster.” 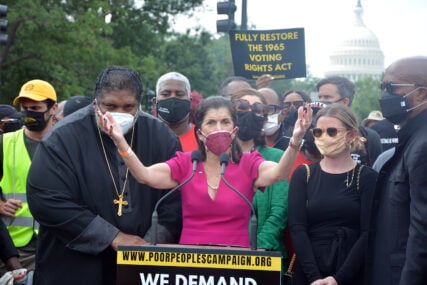 The daughter of President Lyndon B. Johnson — who signed the Voting Rights Act into law — also addressed the crowd at the event. Luci Baines Johnson noted she could not speak for her father, but insisted he would have wanted her to be with activists “in the fight for social justice and voting rights.” After voicing support for the For the People Act and the John Lewis Act, another voting rights bill, she invoked Scripture while calling for bipartisanship.

“In the 1960s, Democrats and Republicans stood up together for social justice,” she said. “It was the right thing then, and it’s the right thing now. Now more than ever before, we need to — in the words of Isaiah — come and reason together to get a more just America for everybody.”

The Rev. Jesse Jackson also addressed the crowd, bemoaning what he called a nation “in crisis” and voicing a willingness to go to jail for the cause. 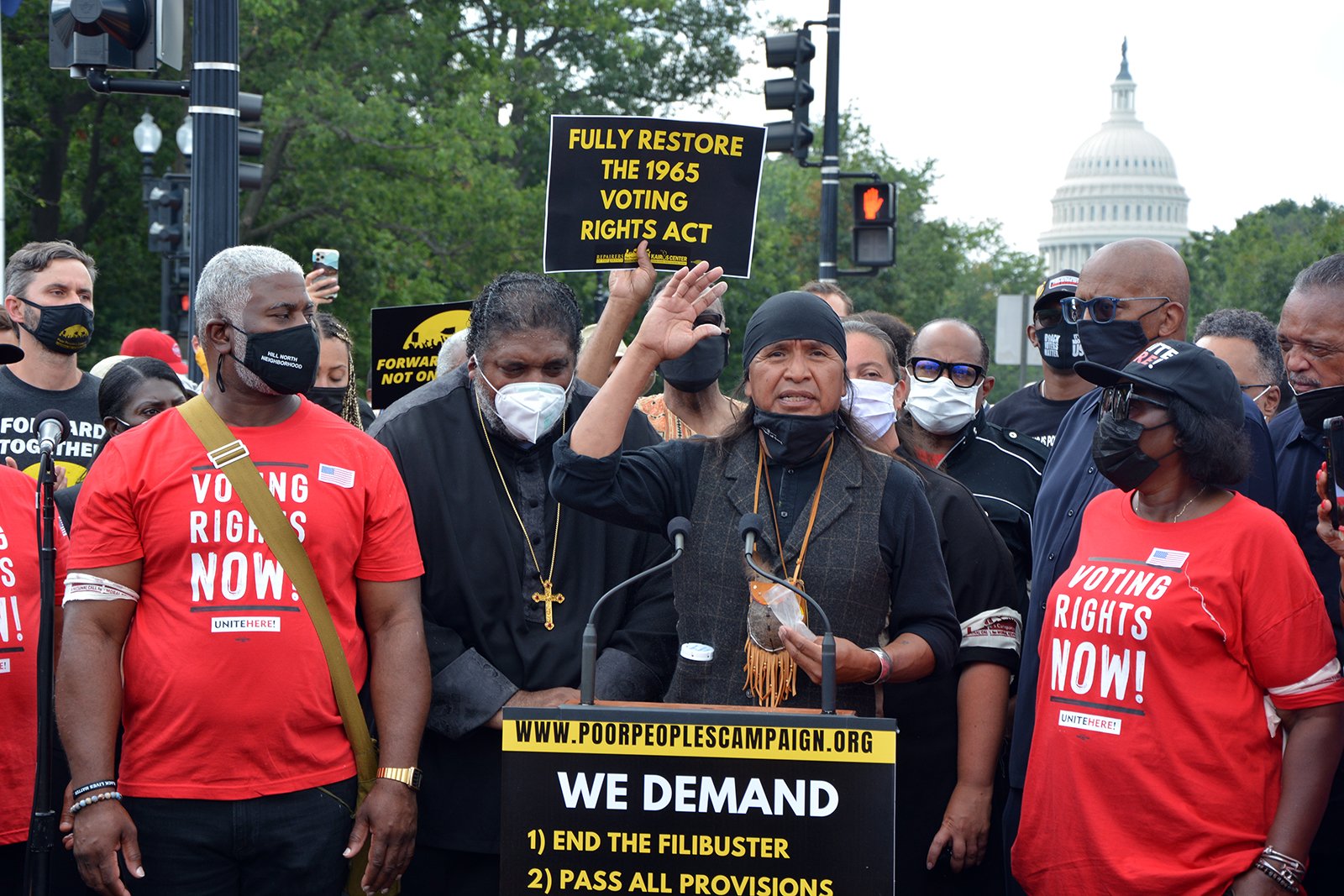 After the speeches, the activists massed into a column and marched toward the Capitol, with clergy walking alongside low-wage workers and those impacted by poverty. Tensions briefly flared with police when they insisted demonstrators stay on the sidewalk for one stretch of their march. Protesters initially refused, walking past police before a wave of new officers arrived and corralled the group off the street.

Demonstrators took to the street a short time later after processing past the Supreme Court toward the Hart Senate building. One column of protesters stayed on the sidewalk, but a separate group — including Barber, Theoharis, Jackson and what appeared to be Messer and Oliva — positioned themselves in the middle of the road, refusing to move. Some briefly requested entry to the Hart building at Barber’s urging, but police rebuffed them, and they returned to the street. 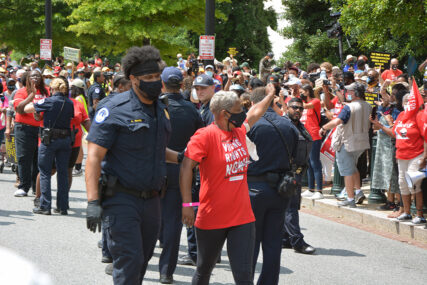 As demonstrators sang and chanted (“What do we want? Voting rights! When do we want them? Now!”), officers began arresting those in the road one by one, carefully leading them away. Cheers rose up as Theoharis, Barber and Jackson were arrested, and they were followed by hundreds more: clergy of multiple faiths, low-wage workers, young activists and elderly people in walkers or wheelchairs were all among those arrested.

When each one arrived at the area where other arrestees were waiting to be processed, shouts and applause rang out.

It remains to be seen how lawmakers will react to the growing protest movement. Sen. Sherrod Brown of Ohio was spotted walking quickly past the protest. When demonstrators shouted for the end of the filibuster, he quickly replied, “I agree with you,” a reference to his public willingness to end the filibuster if Republicans continue to use it to block liberal legislation.

The mixture of religious and labor demonstrators appeared to be clear in their cause on Monday and dedicated to convincing Congress to support it. They sang many songs, but one favorite seemed to be aimed directly at lawmakers: It simply asked, over and over, “Which side are you on?”