(RNS) — Portland, much like the rest of the nation, has been dealt innumerable difficulties in recent years. The reality of climate change has brought extraordinary temperatures and wildfires. We’ve been challenged by the Black Lives Matter movement to address longstanding racial justice issues. COVID-19 has battered the entire state.

To top it off, the Proud Boys and Patriot Prayer, two far-right political groups, keep descending on the City of Roses with the clear intent of inciting violence.

The Proud Boys have been designated a hate group by the Southern Poverty Law Center. NPR reported in 2018 that the FBI had declared them “an extremist group with ties to white nationalism.” In May, Canada designated the Proud Boys a “terrorist entity,” and it has been widely reported that Proud Boys were prominent leaders in the Jan. 6 insurrection at the U.S. Capitol.

Last month, when the Proud Boys assembled in Northeast Portland’s Parkrose community, I was there. Here is what I saw.

The original plan for Aug. 22, according to news reports, was for the Proud Boys to rally in downtown Portland. However, after counter-demonstrations materialized, the Proud Boys apparently decided to relocate to an abandoned Kmart parking lot near the Portland airport. I parked on the edge of that parking lot to listen in on what the Proud Boys called their “Summer of Love” event.

Armed with paintball guns, bats and other weapons, speaker after speaker assailed the Black Lives Matter movement. Echoing language used by Vladimir Putin, a banner was unfurled atop the abandoned Kmart demanding the release of “political prisoners” arrested for participating in the Jan. 6 attack. Proud Boys leader Tusitala “Tiny” Toese, who has been convicted for employing violence at protests, called for violence against the LGBTQ community. Others railed against vaccinated people and mask-wearing to curtail the pandemic.

As a minister in the United Church of Christ, I was particularly interested in how the Proud Boys used their rally to promote Christian nationalism. Jesus was not meek, a speaker told the crowd, trying to draw a parallel between Jesus and the tough-guy Proud Boys. “Trust Jesus” was an oft-repeated phrase at the rally (and also emblazoned on sweatshirts).

They claimed that white men, not people of color, religious minorities or women, are the real victims of discrimination and hatred. Missing was any mention of loving God or neighbors, the Greatest Commandment.

As I observed the proceedings, I shared those observations on Twitter. Once the Proud Boys realized I was in the area, they crossed the parking lot to my Jeep, which they surrounded and pounded on several times, all while demanding that I leave. I was called a fag and told that real Christians are Proud Boys.

Finally, with the attention of the Proud Boys momentarily turned to counter-protesters across the street, I left. While I had not come to fight, it was clear the Proud Boys were there for just that reason.

Unfortunately, Antifa activists, the loose-knit anti-fascist group, decided to join the fray. If the Proud Boys had come looking for a fight, Antifa, as usual, came prepared to give them one. As Antifa entered the Kmart parking lot, the Proud Boys began a relentless assault. As Oregon Public Broadcasting reported: The Proud Boys’ rally “ended with a roving brawl along busy city streets in the Parkrose neighborhood, and shots being fired in downtown Portland.”

Astonishingly, Portland Mayor Ted Wheeler ordered Portland Police not to intervene. After the fights broke out, OPB wrote, “Toese and other Proud Boys continued to drive around the Parkrose neighborhood shooting paintballs at people.” Parkrose is one of Portland’s most diverse communities.

The Proud Boys are a threat to democracy. Antifa, whose activists assaulted a journalist trying to cover events on Aug. 22, is not the antidote to the Proud Boys. I find it disheartening that a small group of clergy, under the umbrella of Portland Interfaith Clergy Resistance, provides moral cover for Antifa and anarchists, seemingly regardless of what they might do.

Anti-democratic forces feed off chaos. Turning up over and over to fight the Proud Boys has given these far-right thugs precisely what they want.

I wish I had a Tweet-sized answer to political violence in the United States. I don’t. At the very least, the federal government needs to combat the growing threat of right-wing domestic terrorism. If Portland’s mayor refuses to defend democracy, President Joe Biden must.

Churches must also condemn the white nationalism advanced by the Proud Boys and their allies and become intentional about anti-racism work. For democracy to work, all of us must become active citizens and work toward the ideal of the Beloved Community. 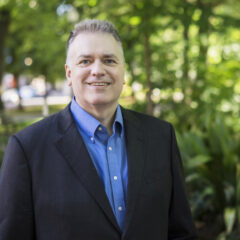 Otherwise, Portland and the rest of the United States will resemble the hate-filled vision offered up by the Proud Boys. Unfortunately, we are too close to that ugly vision already.

(The Rev. Dr. Chuck Currie is an ordained minister in the United Church of Christ. He lives in Portland, Oregon, and can be reached on Twitter @revchuckcurrie. The views expressed in this commentary do not necessarily reflect those of Religion News Service.) 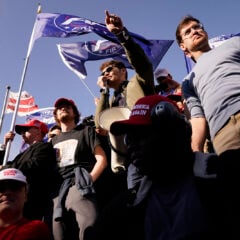 Opinion
Kyle Rittenhouse, whiteness and a divinely ordained license to kill
Follow us on Facebook!
Submit your photos to RNS