(RNS) — Growing up in the Church of Christ in Burbank, California, Angelea Hayes was often told Christianity and environmentalism were incompatible. But in her first year at Pepperdine University in Malibu, Hayes found herself sheltering in place and sleeping on gym floors as 2018’s Woolsey Fire burned across Los Angeles and Ventura counties.

Today, Hayes sees climate change not only as a matter of the utmost urgency, but a matter of faith.

This weekend, Hayes, now a senior at Pepperdine, will join other young evangelicals to rally for climate action on Capitol Hill. Organized by Young Evangelicals for Climate Action, formed in 2012, the event is taking place in conjunction with Climate Week NYC, which is hosted by the nonprofit Climate Group in conjunction with the United Nations and the city of New York.

The rally will take place at 10:30 a.m. Saturday (Sept. 25) and will include opportunities to create posters, participate in a climate change-themed liturgy and be part of a collaborative art piece that illustrates individuals’ prayers for the climate.

The demonstrators will also call on Congress to permanently protect the Arctic National Wildlife Refuge, make bold investments in clean energy and launch a new and equitable Civilian Conservation Corps that provides employment on environmental projects.

Leaders of the rally say the event is timely because the change in administrations may mean that more political muscle will be put behind legislation aimed at curbing climate change. 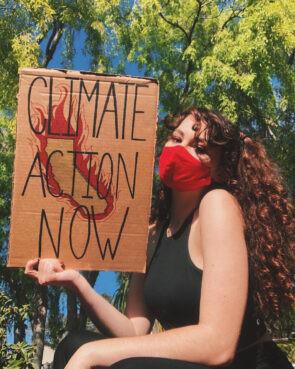 “We feel like this is a really critical moment in Congress,” said Tori Goebel, national organizer and spokesperson for YECA. “It’s time to put aside political posturing and to really take bold concrete climate action, both as we seek to recover economically from COVID-19, and also as we invest in infrastructure.”

But for participants such as Hayes, it’s the severity of changes in weather and sea levels that makes the rally particularly relevant.

Jenna Van Donselaar, a member of YECA’s steering committee, agreed. “The best time to work on climate justice was 10 years ago, but the second-best time is now.”

In addition to staging public awareness events, YECA trains college students to promote climate action on campus and urges church leaders to address climate change in their congregations. In 2020, YECA read an open letter at the National Prayer Breakfast calling participants to remember the victims of the climate crisis in their prayers.

Historically, evangelicals — particularly white evangelicals — aren’t known for their embrace of climate action, and the group’s evangelical identity strikes some as contradictory. “People would say, aren’t you Christian?” said Hayes. “Don’t you believe in an all-powerful God who is in control? Isn’t it arrogant to think we could change the world on such a large scale?”

Van Donselaar said that the word “evangelical” in the group’s name both opens doors and closes them. “It might mean we have to do extra work to show our impact, rather than just signifying it with our name,” she said. Members of the Youth Evangelicals for Climate Action stand together in front of the White House. Courtesy photo by Luke Overstreet

In a conversation with the Religion News Service, Jonathan Merritt traced evangelical opposition to environmentalism back to the 1970s, when the Clean Air Act and the Clean Water Act were being passed in Congress, just as the religious right was forming. “The left took ‘green,’ and the right took God, and they’ve never really been rejoined,” said Merritt, a contributing editor at Religion News Service and author of the 2010 book “Green Like God.”

In 2006, some evangelical leaders tried to reverse the trend by creating the Evangelical Climate Initiative, releasing a statement that declared “human-induced climate change is real.” It was signed initially by 86 evangelical leaders, including heavyweight Rick Warren.

The move created a backlash. Evangelical groups such as Focus on the Family and the Family Research Council answered with an anti-environmentalism video series that called creation care “deadly to the gospel of Jesus Christ.”

The issue still gets little traction among white evangelicals. Data from 2015 presented by the Pew Research Center showed that just 28% of white evangelicals believed the Earth was getting warmer due to human activity, compared with 56% of Black Protestants.

“When you look at the political concerns of evangelicals, climate change does not rank,” said Merritt. “There are many issues about which evangelicals care far more than this one.”

YECA’s members hope to leverage their elders’ interest in the coming generation to convince church leaders and politicians alike of the present dangers of climate change.

“Often political leaders will tell young people that we’re inspiring, we’re the leaders of tomorrow,” said Goebel. “But the window we have to avert the worst impacts of climate change is closing. We need those in Congress right now to act, not just be inspired by young people.”