(RNS) — On the first day of real questioning at this week’s Supreme Court confirmation hearing, Sen. Lindsey Graham asked the nominee, Judge Ketanji Brown Jackson, “On a scale of 1 to 10, how faithful would you say you are?”

This question was bizarre and what followed was fascinating — not least because Graham offered that he, a senator of the party that champions faith and family values, only goes to church about three times a year himself.

After Jackson reminded him there was no religious test for office in the United States, Graham agreed, and finally got to something like a point: He didn’t object to her faith (which she identified as nondenominational Protestant). He was just whining.

Graham made this clear when he later asked a quasi-hypothetical question, “Could you fairly judge a Catholic?” Graham and his fellow Republicans are still angry about how Democrats treated conservative Catholic Amy Coney Barrett in her 2017 confirmation to the U.S. Court of Appeals, at which time Sen. Dianne Feinstein unwisely said of now-Supreme Court Justice Barrett, “The dogma lives loudly within you.”

Never mind that Graham violated the 11th Commandment of Politics — Thou shalt not whine — it turned out that he had no serious question about Jackson’s faith at all. Religion was just one more topic used in a pathetic exercise in score-settling and sloppy rhetoric.

As the stakes of Supreme Court nominations become ever higher in our politics and religious belief is increasingly tied to partisanship, the discussion of faith has crept into this confirmation battle less as a meaningful signpost on the road to law and justice and more as a wild-card tactic, a line of attack designed to pump up the base.

A day after Graham’s faith-based flummery, Sen. John Kennedy of Louisiana sought to clarify with Jackson when life begins. When the judge admitted she didn’t know, Kennedy asked, “Do you have a belief?”

This is traditionally the right answer with respect to how faith and public service are expected to relate. But since religion has become an attractive weapon in the opposition’s arsenal, each side has its own “right answer,” which proves the worthiness or perfidy of a nominee.

Democrats did not like the fact that Catholic justices like John Roberts, Samuel Alito, Brett Kavanaugh and Amy Coney Barret presumably lean into the anti-abortion and anti-gay aspects of their faith (while, secondarily, being largely unmoved by the broad scope of Catholic social teaching that emphasizes labor solidarity, social welfare, peace, ecological justice and democracy).

Likewise, Republicans are incredulous that Democratic nominees, in spite of professing religious faith, are resolutely committed to legal abortion and the expansion of LGBT rights.

But it has nothing to do with the qualifications of a judge to be promoted to the Supreme Court, and it has all led to the spectacle of Jackson, the first Black woman to be nominated, enduring (and diffusing) overprivileged white men’s asking metaphysical questions as if they were slam-dunks on a hostile witness.

No better, in its own way, was the softball that Sen. Cory Booker gave Jackson about her faith. In reply, she spoke of her grandmother and then expressed a common, normal sentiment about religion: “When you go through difficult times, you lean into family and turn to faith. That is part of my experience as well.”

A “nondenominational Protestant” myself, I assume infrequent church attenders who identify this way are not people of strong faith but, like me, nominal or cultural Christians without any real religious affiliation or serious devotion. There is surely a large subset of the Democratic coalition, on the other hand, who would prefer that Jackson espouse no belief at all, or at least not bring it up repeatedly as she has.

In the end, the nominee, qualified by any objective standard and true to herself, looks even better in comparison to the circus going on all around her.

May the new Justice and her colleagues find strength in the prayer said at the beginning of each Supreme Court session: “God save the United States and this honorable court.” 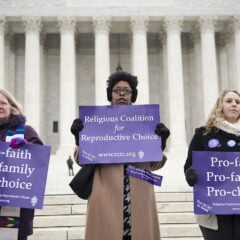