VATICAN CITY (RNS) — War in Ukraine might have set back the clock on Vatican relations with the Russian Orthodox Church, but according to one expert on Catholic relations with Eastern churches a meeting between Pope Francis and Patriarch Kirill of Moscow, the head of the Russian Orthodox Church, originally planned for June is not yet off the table.

Since Russia invaded its neighbor on Feb. 21, Francis has strongly urged an end to the fighting, but he has not blamed Russian Vladimir Putin for the war, nor named Russia as the aggressor. The Vatican has remained above the conflict and has not taken an official position on whether Ukraine should join NATO and the European Union, become part of Russia or be an independent state.

In his speeches and sermons Francis has “never spoke clearly about Ukraine or Russia, he never even mentioned the Ukrainian Catholics,” said the Rev. Stefano Caprio, who teaches Russian history and culture at the Pontifical Oriental Institute in Rome and served as a missionary in Russia between 1989 and 2002.

Nor did the Vatican release a statement after Francis spoke to Ukrainian President Volodymyr Zelenskyy on Tuesday (March 22), as it did after his video call a week earlier with Kirill.

Francis’ dovish approach may also be explained in part by “the usual Ostpolitik,” Caprio explained, referring to the West’s Cold War foreign policy toward the Soviet bloc, “where doors are kept open to the enemy.”

But the Vatican “must be very careful,” he said, that Francis’ overture to Kirill is not interpreted as supportive of Russia’s invasion of Ukraine.

According to Caprio, Francis and Kirill are juggling relations with multiple political and religious actors. While their views of the conflict in Ukraine may seem at odds, the two religious leaders are attempting to court all sides in the conflict, and a meeting between the two in Kyiv would crown centuries-old ecumenical efforts, Caprio said.

The pope and the patriarch were scheduled to meet this summer in neutral territory until the crisis pushed back the date indefinitely. According to Caprio, the March 16 call between Francis and Kirill, who both had mediators present, “showed that the meeting, if it could not happen as scheduled in Canada this June, has already begun.” 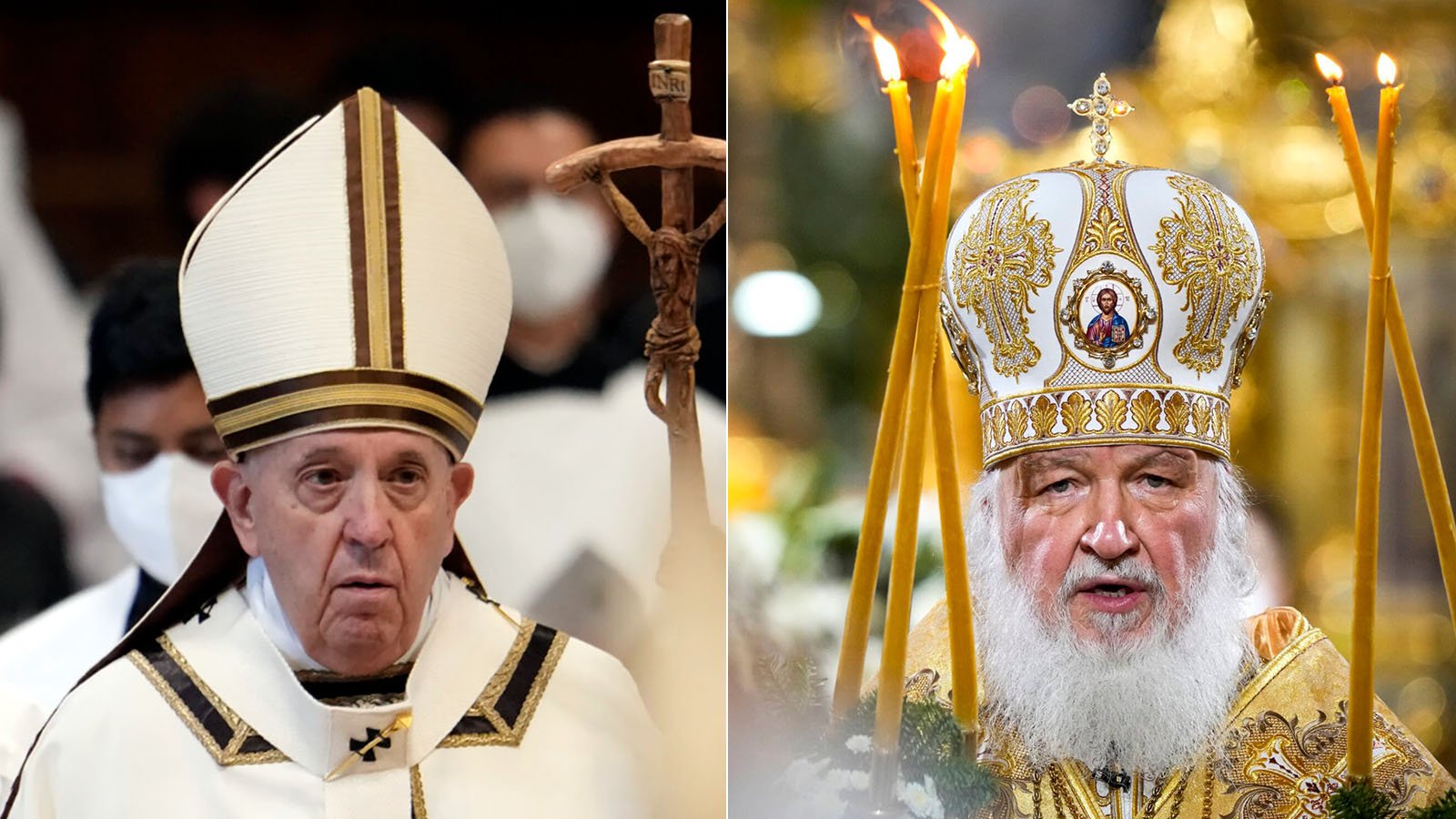 Caprio said Kirill’s meetings with both Francis and the Church of England’s Archbishop of Canterbury Justin Welby, the spiritual leader of the Anglican Communion, soon after giving a fiery sermon against Western ideology justifying Putin’s holy war in Ukraine show that while the patriarch must support Russia’s military intentions,  “he doesn’t want to break relations with the world.”

Kirill has mastered the art of “jumping from one side of the river to the other,” the priest added, “not unlike Pope Francis.”

In 2016, Francis and Kirill became the first heads of their respective churches to meet in person in 1,000 years when they sat down to talk at the airport in Havana. Together they signed a joint declaration, which among other topics addressed growing tensions in Ukraine.

The Vatican is still holding out hope, Caprio said, that it can rekindle the relations between the two church leaders, despite Kirill’s increasing identification with Putin’s bellicosity. “The Orthodox Church in Russia substituted (for) the Communist Party,” Caprio said; it’s the church that provides the ideological fuel for the Kremlin’s geopolitical ambitions, as well as the theological underpinnings for Putin’s anti-LGBTQ  measures and other conservative social policies.

As evidence of “how mixed the religious, political and military interests are,” Caprio pointed to the Russian church’s top official in Africa, Patriarchal Exarch Leonid. Once a colonel for the Russian army, he now plays an important role in promoting the Russian interests on the continent.

The war has complicated Francis’ outreach not only to Kirill but the Orthodox world at large. There are 15 independent Orthodox churches, including Ukraine’s, which is only recognized by Athens, Constantinople and Alexandria in Egypt. The others have for the most part remained neutral, but with the war, more and more are moving toward Constantinople. A major Russian Orthodox monastery in Lviv announced last week that it wishes to detach itself from Moscow.

With a looser concept of administrative unity than the Catholic Church, individual Orthodox churches commonly swap allegiances — “today Moscow, tomorrow America, the next day Constantinople, depending on what happens,” Caprio explained.

With fast-switching allegiances, it’s impossible to predict whether the Russian primacy in Orthodoxy will change, making it very difficult for the Catholic Church to choose an interlocutor over the other.

“The pope right now is halfway between Russia and Constantinople,” Caprio said.

Francis is passionately interested in intervening in the war to make peace, according to Caprio — “The pope would go by foot to Ukraine,” he said — but he would not risk going alone to Ukraine now out of fear of angering the Russian Orthodox. The pope could solve multiple  conundrums, Caprio reasons, by meeting the patriarch in Kyiv.