WASHINGTON (RNS) — Maryland Democrat Rep. Jamie Raskin expressed concerns on Thursday about needing to “deprogram” some Republican House colleagues he described as acting like “members of a religious cult,” and singled out “white Christian nationalist groups” among those who participated in the attack on the U.S. Capitol last year.

Raskin, who sits on the select House committee investigating the insurrection that took place on Jan. 6, 2021, made the comments during an April 21 event at Georgetown University titled “Truth and Trauma: The Trials of American Democracy and Personal Tragedy.” The nearly two-hour wide-ranging discussion was moderated by Jim Wallis, head of the university’s Center on Faith and Justice, which hosted the event.

Noting how Raskin lost his son to suicide days before the insurrection, Wallis, who also founded the liberal-leaning Christian group Sojourners, described the congressman as a “loving father, a patriot in sunshine and stormy weather, and a champion in the fight for democracy that now lies ahead for all of us.”

Asked about the ongoing work of the select committee, Raskin encouraged attendees to listen to hearings on Jan. 6 slated to take place later this year.

“The hearings will tell a story that will really blow the roof off the House,” he said, “because it is a story of the most heinous and dastardly political offense ever organized by a president and his followers and his entourage in the history of the United States.”

Raskin added that the “scariest” ring of influence during the insurrection was the group of ringleaders of what he termed the “coup” and described as an insider-led organized effort to overturn the results of the 2020 election.

Raskin went on to list a litany of groups he said were involved with Jan. 6, such as the extremist groups Oathkeepers and Proud Boys, whose members are facing charges for their role in the attack, as well as “QAnon networks, militia groups, the Ku Klux Klan, Aryan Nations, and some white Christian nationalist groups.”

The reference to Christian nationalism comes in the wake of a report, published in February by the Baptist Joint Committee for Religious Liberty and the Freedom From Religion Foundation, detailing the significant role the fusion of faith and politics played in the attack on the Capitol. Authors of the report briefed members of the Congressional Freethought Caucus last month about their findings — including Raskin, who co-founded the caucus.

Addressing the religious elements of the attack is a shift from the early impeachment trial of former President Donald Trump that Raskin helped lead in February 2021, where references to the faith of insurrectionists were notably absent.

Later on in the program, a student in the audience asked Raskin how to maintain mental health in a chaotic world. Raskin replied by encouraging listeners to “stick to the truth,” then expressed concerns about Republican colleagues he said “feed themselves on lies.”

He singled out Rep. Marjorie Taylor Greene, a controversial Georgia lawmaker, conservative Christian and conspiracy theorist who has endorsed views associated with the QAnon movement — some of which have been decried as antisemitic and anti-Muslim — that resulted in her being stripped of committee assignments shortly after assuming office in 2021.

Raskin recalled a recent incident where Greene heckled him on the House floor while he was encouraging the members to hold two of Donald Trump’s former allies in contempt of Congress. 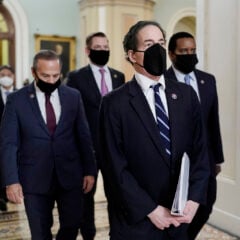 Rep. Jamie Raskin, D-Md., one of the democratic House impeachment managers,  walks out of the Senate Chamber in the Capitol at the end of the fifth day of the second impeachment trial of former President Donald Trump, Saturday, Feb. 13, 2021, in Washington. (AP Photo/J. Scott Applewhite)

Raskin, a humanist and a member of the Congressional Free Thought Caucus, said the behavior is evidence that some Republican House members are “acting much more like members of a religious cult,” and said he has “literally been consulting deprogrammers to try to figure out how to talk to them and how to pull them away.”

The lawmaker said deprogrammers told him to be “as warm and affectionate and as personable as you can” to his colleagues to “make them remember what life was like before they got into the cult.

“But you have to be very emphatic about what the truth is and what facts are versus what is just derangement,” he said. “I’ve told some of them — I’m like, ‘If you guys don’t get out of this, you’re going to be fit when it’s all over only to be selling incense and flowers at Dulles Airport.’”

He later explained he feels the struggle to defend democracy is paramount for a variety of reasons, such as providing the stability to allow the U.S. to confront global climate change.

In discussing Raskin’s new book, “Unthinkable: Trauma, Truth, and the Trials of American Democracy,” Wallis noted the lawmaker has dedicated his work with the select committee and broader advocacy to his late son.

At the end of the program, Raskin was asked by a student how he would suggest going about “deprogramming … people who have been sucked into this cult” outside of the halls of Congress. Raskin cited his son, who, he noted, taught Sunday school and told kids that “everybody should try to make friends with somebody you don’t agree with.”

“That’s pretty good advice,” Raskin said. “I think that rediscovering those mystical cords of affection, and those bonds … I think that’s important.”