(RNS) — On May 21, 1922, a liberal minister in the pulpit of New York’s First Presbyterian Church preached one of the most important sermons in American history. It also cost him his job.

The Rev. Harry Emerson Fosdick went on to become the founding pastor of New York’s soaring Riverside Church, built by John D. Rockefeller Jr.; the Rev. Martin Luther King Jr. would one day call him “the greatest preacher of this century.” But it was the sermon he preached 100 years ago this weekend, entitled “Shall the Fundamentalists Win?”, that first won him prominence on his way to becoming a towering figure in American Christianity.

In the sermon, Fosdick weighed in on the intractable controversy between conservative and progressive Protestants, then known as fundamentalists and modernists. At a time when biblical scholarship and natural science were seemingly calling much of traditional Christian theology into question, he gave voice, in a winsome and compelling manner, to Christians who sought to integrate their faith with these new developments.

In the preceding half-century, advances in textual criticism left biblical scholars with the sense that the Bible was a more human and less divine composition than Christians had been taught to think. Meanwhile Charles Darwin, Sigmund Freud and Karl Marx had upended traditional conceptions about the age of the earth, the human psyche and social organization.

RELATED: Evangelical Christians looking for renewal should look to the margins

“Multitudes of reverent Christians,” Fosdick said, “have been unable to keep this new knowledge in one compartment of their minds and the Christian faith in another.”

There’s no question that the secularizing influence of late 19th-century thought has conquered much of our 21st-century world. We contemporary Americans have more faith in science than our sacred texts, whose origins and conclusions have been impeached in many minds by history, archeology and politics.

Yet we can only conclude that the modernists lost.

Liberalism accelerated so thoroughly that, a few decades later, many liberal clergy disbelieved not only the atonement and the virgin birth of Christ, but his bodily resurrection as well. And while a tiny minority of Christians persist in devotion after these foundational doctrines have been abandoned, most do not. Since at least the 1960s, liberal Protestantism has been in decline.

Liberal Christian institutions also have lower rates of intermarriage, fertility and adult retention. This only accelerates their decline relative to conservatives.

Even in the 1930s, theologian H. Richard Niebuhr offered a succinct and devastating critique of liberal Protestantism: “A God without wrath brought men without sin into a kingdom without judgment through the ministrations of a Christ without a cross.”

Fundamentalists — whom we know mostly as evangelicals — retreated from American public life for a time but have since reemerged with their own institutions, media and strategies. They have more and larger churches, seminaries and publications, even if less prestigious than liberals’ well-endowed but anemic institutions.

Through effective cooperation with secular donors and the Republican Party, conservative Protestants now occupy places of influence and prominence reserved for liberals in Fosdick’s time.

Unfortunately, today’s fundamentalism has retained its anti-intellectual, anti-elite and aggrieved streak, out of all proportion to the then-unimaginable success they have achieved in law, politics and institution-building. They have been not only absent from, but also often have run counter to, the other social movents of our age: civil rights, race, labor, economics and ecology.

Their co-option by an ever more extremist Republican Party has been so thoroughgoing that the term “evangelical” now more meaningfully describes a voting bloc than a theological movement. 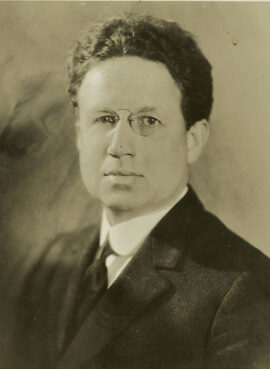 In losing, modernists bequeathed a great legacy to American society and, in winning, fundamentalists found their power but lost their way, falling in with the pernicious elements in American religion, politics and culture.

After his ouster, Fosdick landed at Park Avenue Baptist Church and befriended Rockefeller, who felt Fosdick’s articulation of liberal Christianity was important. In 1930, the year Riverside opened, Fosdick appeared on the cover of TIME, and he soon had turned Riverside Church into the flagship of liberal Protestantism.

Today, mainline Protestants know Fosdick’s work principally by the popular hymn “God of Grace and God of Glory.” Though intended for use with the stately tune “Regent Square,” to Fosdick’s dismay it was (and remains) more popularly set to the Welsh tune “Cwm Rhondda.”

A stanza of the hymn is particularly emblematic of his Protestant vision:

Lo, the hosts of evil ‘round us/Scorn Thy Christ, assail His ways./From the fears that long have bound us/Free our hearts to faith and praise./Grant us wisdom, grant us courage/For the living of these days.

Though largely forgotten outside a subset of religion specialists, Fosdick’s name stands for a tradition and debate that has animated my personal and professional life to a considerable extent. I have traversed the American Protestant landscape from right to left, first abandoning a ministerial vocation, then a scholarly one, and finally working as a kind of roving correspondent in the culture wars.

In the end, I joined neither the fundamentalists nor the modernists. But I respect that the battles both sides fight still hold eternal significance for the lives and souls of millions. Perhaps most incredibly, professional Christians on both sides continue to receive support, not only from the gifts of the faithful but also the patronage of partisans and ideologues who find it advantageous to support their institutions.

But the fundamentalist-modernist controversy — which still enlivens debates, turf wars and squabbles over influence — is not about politics or market share or even money. It is about theology: beliefs about God, Christ and the Bible that cannot be proved with human knowledge because they are ultimately matters of faith.

After 100 years, it remains a blessing to live in a country where doctrines are fervently believed in and fought for by people who are willing to die, but not kill, for them. Mercifully, no one has to do either. (Though some may still lose their pulpits.)

Fosdick might be appeased to know that, on balance, though the fundamentalists won, we can all affirm at least one timeless line from his landmark sermon:

“There are many opinions in the field of modern controversy concerning which I am not sure whether I am right or wrong, but there is one thing I am sure of: courtesy and kindliness and tolerance and humility and fairness are right. Opinions may be mistaken; love never is.”

A century later, that message is as true and urgently needed as ever.

Opinion
America is exceptional — in its addiction to violence and war
Follow us on Facebook!
Submit your photos to RNS