In a 6-3 decision Friday (June 24), the Supreme Court overruled both Roe, decided in 1973, and a 1992 decision in Planned Parenthood v. Casey, which reaffirmed the constitutional right to abortion. The ruling came in the case of Dobbs v. Jackson Women’s Health Organization, which challenged a Mississippi law that imposed strict restrictions on abortion.

“Abortion presents a profound moral question,” the Supreme Court ruled. “The Constitution does not prohibit the citizens of each State from regulating or prohibiting abortion. Roe and Casey arrogated that authority. We now overrule those decisions and return that authority to the people and their elected representatives.”

The Dobbs decision has been anticipated since May, when an early draft of the ruling was leaked to Politico. Friday’s decision to overturn the constitutional right to abortion was met with both rejoicing and dismay by faith leaders, who have been loud voices on either side of the abortion debate since before Roe.

Archbishop William Lori of Baltimore, head of the US Conference of Catholic Bishop’s USCCB’s Committee on Pro-Life Activities, said that Catholics and other faith communities had worked and prayed for Roe’s reversal for years.

He said that the church needs to focus its efforts on a “beautiful vision of human life” and redouble its efforts to assist pregnant mothers who are facing difficult circumstances.

“We haven’t simply opposed abortion,” he said in an interview. “We have been working for the cause of life by providing services — medical services, pro-life pregnancy centers, educational services, charitable services, adoption services.”

Lori added: “What the church has brought to this is a beautiful vision of human life.,” he said. “A beautiful understanding that every life is precious from conception to natural death. We feel that today’s decision by the Supreme Court will help us in communicating and living that vision more effectively. “

The USCCB also called for more support for pregnant women and their children in the wake of Roe v. Wade.

“It is a time for healing wounds and repairing social divisions; it is a time for reasoned reflection and civil dialogue, and for coming together to build a society and economy that supports marriages and families, and where every woman has the support and resources she needs to bring her child into this world in love.”

The Vatican Academy for Life also issued a statement calling for the U.S. to build a society that supports families and “ensuring adequate sexual education, guaranteeing health care accessible to all and preparing legislative measures to protect the family and motherhood, overcoming existing inequalities.” 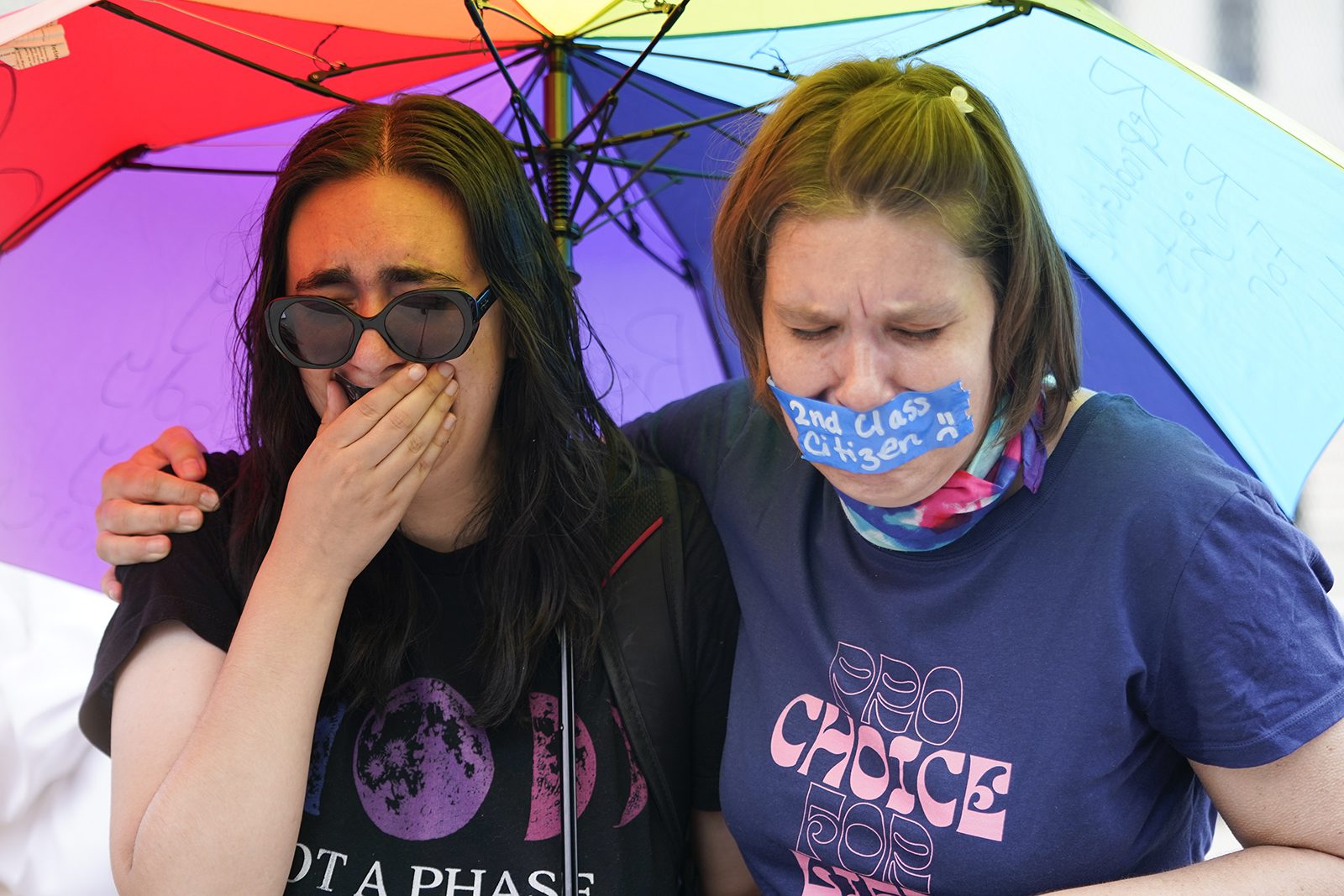 Abortion-rights activists react after hearing the Supreme Court decision on abortion outside the Supreme Court in Washington, Friday, June 24, 2022. The Supreme Court has ended constitutional protections for abortion that had been in place nearly 50 years in a decision by its conservative majority to overturn Roe v. Wade. (AP Photo/Jacquelyn Martin)

Jamie Manson, president of Catholics for Choice, reacted to the decision with “gut-wrenching horror.”

“This ruling gives right-wing leaders unfettered license to codify fringe religious beliefs into civil law. It is a full-frontal assault on, and is utterly incompatible with, the bedrock American principles of religious freedom and the separation of church and state.”

Like many Americans, faith leaders remain divided on the issue of abortion.

“Today is a day of heartbreak, outrage and injustice,” said Jeanné Lewis, CEO of Faith in Public Life, in a statement. “We all have God-given dignity, and we are created to live in respectful relationship with one another. Access to abortion care honors these values; criminalizing people who access or provide abortion does not.”

The National Association of Evangelicals, which filed a brief in the Dobbs case, welcomed the news that Roe was overturned.

“God is the author of life, and every human life from conception to death has inestimable worth,” said Walter Kim, NAE president. “Under Roe v. Wade, our ability to consider policies that safeguard life at the most vulnerable stage was severely limited. While the Dobbs decision doesn’t resolve all the questions on abortion policy, it does remove an impediment to considering pro-life concerns.”

Texas pastor Bart Barber, newly elected president of the Southern Baptist Convention, said that Southern Baptists rejoiced at today’s ruling, and they support laws that would ban abortion, “except in cases wherein the life of the mother is endangered by carrying the baby to term.”

Barber also said “expectant mothers facing difficult circumstances deserve the love and support of the church, the community, and society.” 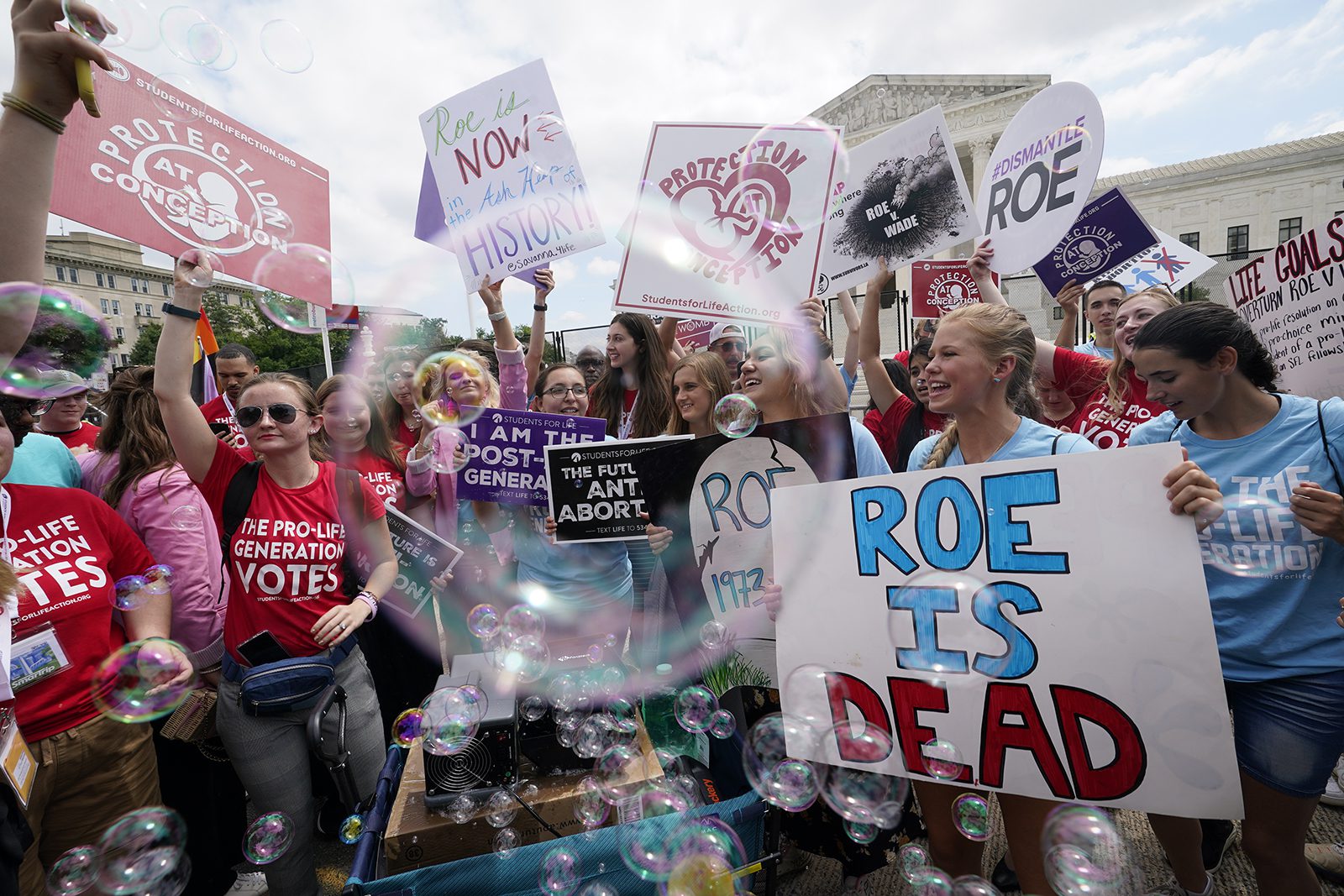 A celebration outside the Supreme Court, Friday, June 24, 2022, in Washington. The Supreme Court has ended constitutional protections for abortion that had been in place nearly 50 years — a decision by its conservative majority to overturn the court’s landmark abortion cases. (AP Photo/Steve Helber)

The New York-based Jewish Council for Public Affairs condemned the Dobbs ruling, saying it does not represent “the will of the people, nor is it in the best interests of the country.” The group also said banning abortion is contrary to Jewish law and values.

“While we treat a fetus with great significance, it does not merit the status of a person until the moment of birth and then it has equal status with the person giving birth,” the JCPA said in a statement. “If the fetus endangers a person’s life physically or, according to at least some Jewish religious authorities, through mental anguish, Jewish law supports abortion of a fetus up until the moment of birth.”

The New York State Catholic Conference said in a response to the decision to overturn Roe, “We give thanks to God.”

“With the entire pro-life community, we are overjoyed with this outcome of the Court,” the statement continued. “However, we acknowledge the wide range of emotions associated with this decision. We call on all Catholics and everyone who supports the right to life for unborn children to be charitable, even as we celebrate an important historical moment and an answer to a prayer.”

The American Humanist Association said the decision will undermine the rights of religious minorities, including non-theists. The group also worries today’s decision will be used in the future to undermine other Supreme Court decisions.

On social media, Amani al-Khatahtbeh, founder of Muslimgirl.com, called the decision a violation of her religious freedom:

As a Muslim woman with a God-given right to abortion, today’s Supreme Court decision is another horrific violation of my religious freedom in America. #RoeVsWade

“Today’s pro-life victory is still only one more step in our ongoing crusade for the sacred cause we serve,” said Tom Brejcha, the group’s president and chief counsel.

Rev. Dr. Susan Frederick-Gray, president of the Unitarian Universalist Association, also sees the Dobbs decision as undermining religious freedom and a violation of her community’s “moral commitment” to the well-being of families.

“This anti-choice decision by the Supreme Court infringes on our deeply held religious beliefs,” she said in a statement. “Access to abortion and the right to choose is an issue of gender equality, bodily autonomy, and religious liberty, all of which are long-held Unitarian Universalist religious teachings.”

Jack Jenkins and Claire Giangravè contributed to this report.