(RNS) — In his first speech in Canada, Pope Francis gave a comprehensive apology that showed he had listened carefully to the concerns of Indigenous peoples. They wanted not only an apology for the sins of individual Christians against the Indigenous children in church-run residential schools but also an acknowledgment of the cooperation of Christians in the systematic destruction of Indigenous culture.

Too frequently, when church officials apologize, they blame a few bad apples while defending the church. The pope rejected this approach when he spoke at the site of the former Ermineskin Residential School, where Indigenous children, forcibly taken from their parents, were punished for speaking their own languages and forced to assimilate to European culture.

The Indigenous communities of Canada include the First Nations, Métis and Inuit.

The pope told these communities that the “first step of my penitential pilgrimage among you is that of again asking for forgiveness, of telling you once more that I am deeply sorry.” Here his presentation was interrupted by applause for the first of four times by the audience, which was mostly made up of former students of the residential schools and Indigenous leaders.

He apologized for the sins of individual Christians against children and for the cooperation of Christians in the systematic destruction of Indigenous peoples and their culture. What was being confessed was both personal sin and structural sin.

He expressed sorrow “for the ways in which regrettably, many Christians supported the colonizing mentality of the powers that oppressed the Indigenous peoples. I am sorry. I ask forgiveness.” Again, there was applause.

The pope requested “forgiveness in particular for the ways in which many members of the church and of religious communities cooperated, not least through their indifference, in projects of cultural destruction and forced assimilation promoted by the governments of that time which culminated in the system of residential schools.”

He acknowledged that “the overall effects of the policies linked to the residential schools were catastrophic. What our Christian faith tells us is that this was a disastrous error, incompatible with the gospel of Jesus Christ.” 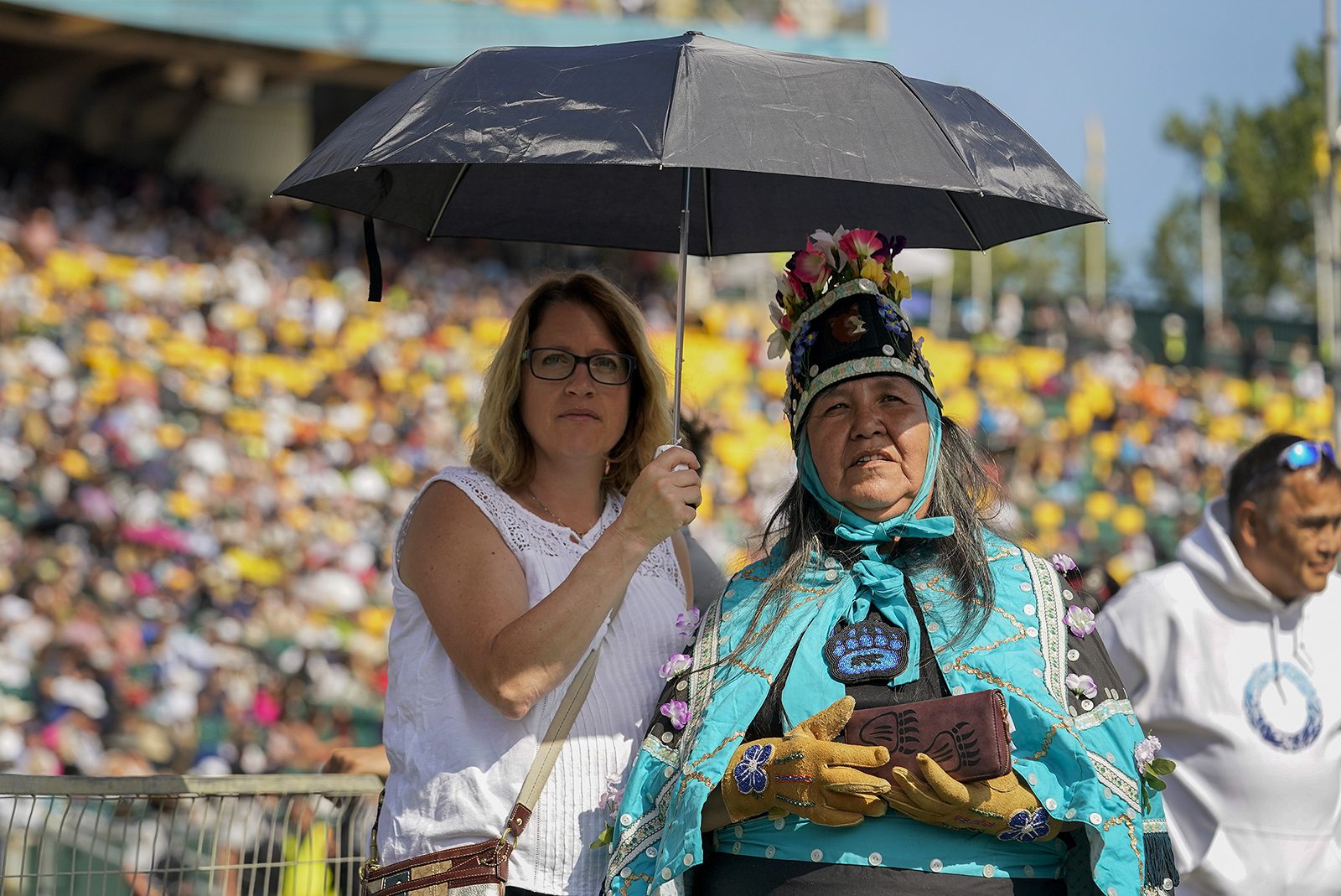 The pope acknowledged that those present in the audience continue to pay the price for the disastrous policies that led to the erosion of the “values, language and culture that made up the authentic identity of your peoples.”

“In the face of this deplorable evil,” he continued, “the church kneels before God and implores his forgiveness for the sins of her children. I myself wish to reaffirm this with shame and unambiguously. I humbly beg forgiveness for the evil committed by so many Christians against the Indigenous peoples.” Again, there was applause.

Before he spoke at Ermineskin Residential School, the pope was greeted as “Francis White Eagle” by Chief Wolf Walker Golden Eagle, known in English as Wilton Littlechild, who was a student at the school. He was also a member of the Truth and Reconciliation Commission of Canada.

The chief welcomed Francis for traveling “a long way to be with us on our land and to walk with us on the path of reconciliation” and said he was especially grateful for the reception that the school survivors and Indigenous leaders received from the pope in Rome.

“You listened deeply and with great compassion to the testimonies that told of the way our languages were suppressed, our culture taken from us and our spirituality denigrated,” he said. “You have heard the devastation that followed from the way our families were torn apart. The words you spoke to us in response clearly came from the depths of your heart and were for those who heard them a source of deep comfort and great encouragement.”

The pope fully agreed with “many of you and your representatives (who) have stated that begging pardon is not the end of the matter.”

“That is only the first step, the starting point,” he said. “I also recognize that looking to the past, no effort to beg pardon and to seek to repair the harm done will ever be sufficient. And that looking ahead to the future, no effort must be spared to create a culture able to prevent such situations from happening. An important part of this process will be to conduct a serious investigation into the facts of what took place in the past and to assist the survivors of the residential schools to experience healing from the traumas they suffered.” Again, applause. 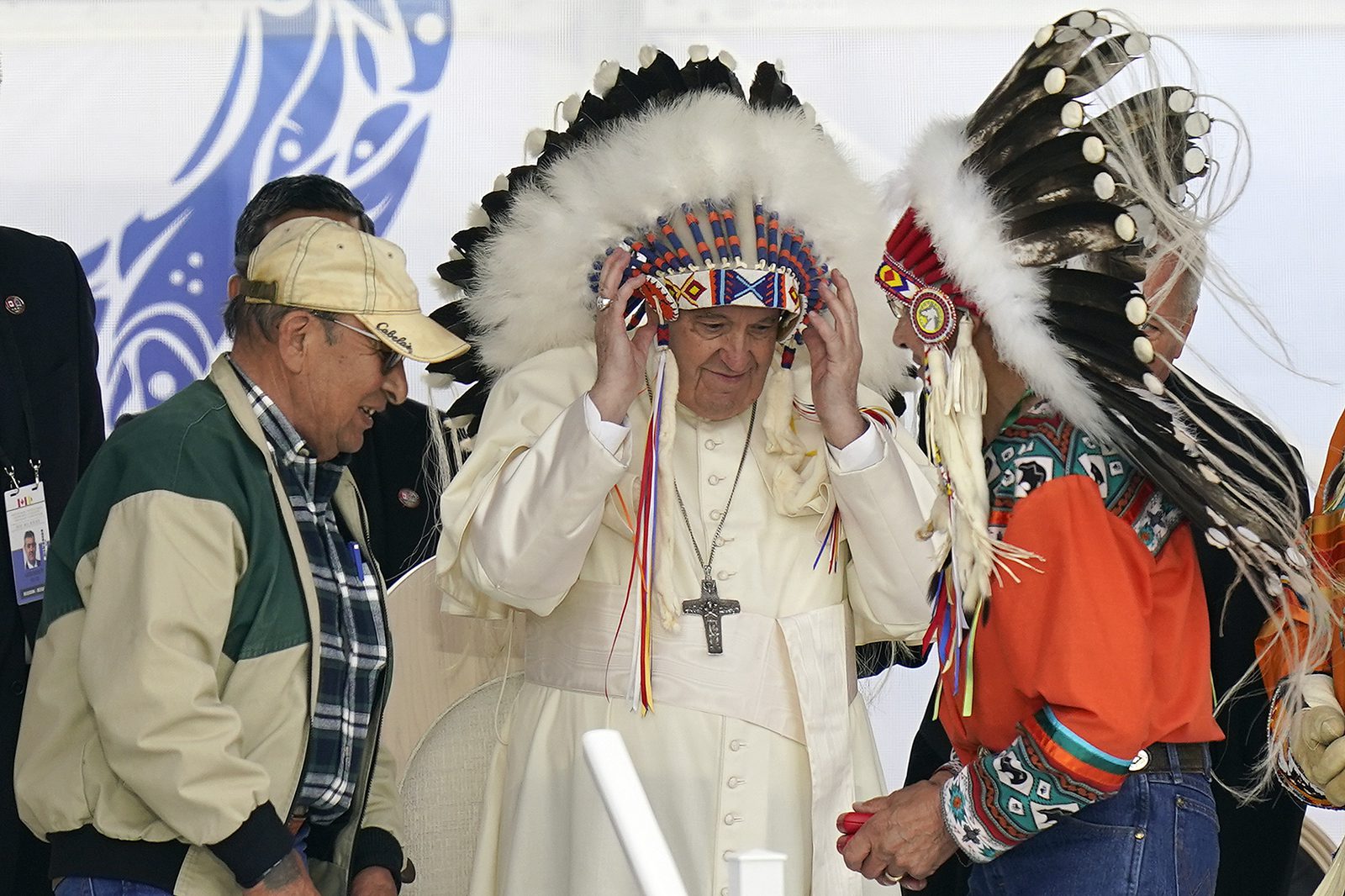 Pope Francis puts on an Indigenous headdress during a meeting with Indigenous communities, including First Nations, Métis and Inuit, at Our Lady of Seven Sorrows Catholic Church in Maskwacis, near Edmonton, Canada, Monday, July 25, 2022. Pope Francis begins a “penitential” visit to Canada to beg forgiveness from survivors of the country’s residential schools, where Catholic missionaries contributed to the “cultural genocide” of generations of Indigenous children by trying to stamp out their languages, cultures and traditions. Francis is set to visit the cemetery at the former residential school in Maskwacis. (AP Photo/Eric Gay)

The penitential pilgrimage of Pope Francis should be an example to all church leaders who need to apologize to victims of church leaders and other Christians. A prerequisite to any apology is listening so the apology can be comprehensive and respond to the needs of survivors. Listening is an essential part of the healing process, as is the apology, and no apology will be successful without it.

Pope Francis followed up his apology with a visit to Sacred Heart Church of the First Peoples in Edmonton, where Indigenous culture and spirituality are an integral part of church life. As a Métis parishioner, Candida Shepherd explained to the pope, “Our church is a place where we will continue to preserve and revitalize Indigenous language, art and music, instilling pride in our future generations.”

The pope was greeted by Indigenous drummers and singers from the parish. In the sanctuary are three poles of a tepee as, Shepherd explained, “a symbol that reflects our living home providing safety and connection to Mother Earth.” She cited John 1:14, which says, “the Word became flesh and dwelt among us,” which is literally translated as, “He pitched his tent among us.”

The pope also noted that in the church “a tree trunk symbolically unites the earth below and the altar on which Jesus reconciles us in the Eucharist in an act of cosmic love that joins heaven and earth, embracing and penetrating all creation.”

The pope said the Indigenous people have much to teach the church about the use of such symbols.

The pope’s visit showed his respect for Indigenous culture and its incorporation into church life and liturgy. This is as important to the Indigenous peoples of Canada as his apologies.