(RNS) — American Muslims breathed a sigh of relief when law enforcement authorities announced the arrest of a man suspected of killing as many as four Muslim men in Albuquerque, New Mexico, earlier this month.

But then it turned out the suspect, Muhammad Syed, was himself a Muslim. (He has been charged in the killing of three of the men.)

A new survey by the Institute for Social Policy and Understanding, a think tank based in Washington and Dearborn, Michigan, corroborates a disturbing finding. While Islamophobia has declined among other American religious groups, it has increased among Muslims themselves.

American Muslims scored 26 on the ISPU’s Islamophobia index of 0 to 100, which measures a group’s endorsement of anti-Muslim stereotypes. That’s higher than many other religious groups, such as Jews, who scored 17 on the index; Protestants, who scored 23; or the religiously unaffiliated, who had a score of 22. White Catholics (28) and white evangelicals (30) scored highest on the Islamophobia index. 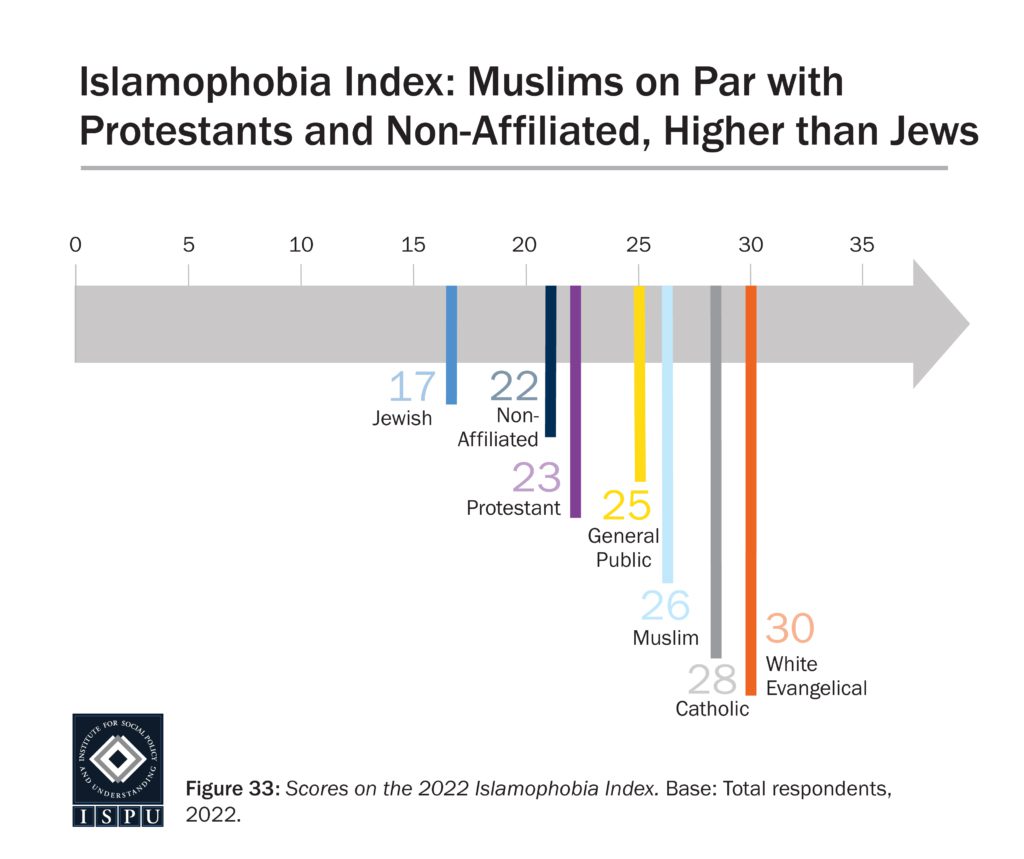 “Islamophobia Index: Muslims on Par with Protestants and Non-Affiliated, Higher than Jews” Graphic courtesy of ISPU

“Minority groups can internalize negative stereotypes about their community,” said Erum Ikramullah, research project manager and the report’s co-author. “It has huge effects on mental health, feelings of shame, embarrassment and self-identity.”

Within the Muslim community, the report found that higher Islamophobia index scores were driven primarily by Muslims who identify as white. White Muslims had a score of 40 on the index.

Moustafa Bayoumi, a professor of of English at Brooklyn College, City University of New York, suggested that’s a crisis of whiteness that has affected white Muslims, too.

“With the whole country being driven by conservative politics centered on whiteness, it’s naive to think that white Muslims would not be susceptible to that same ideology,” Bayoumi said.

Younger Muslims were also more likely to have internalized Islamophobia.

The ISPU Muslim Poll is the sixth annual survey investigating the views of Muslims, Jews and the general population. The 2022 survey, conducted between February and March, was fielded online and on the phone from among 807 U.S. Muslims, 351 U.S. Jews and 1,001 U.S. adults from the general population, for a total of 2,159 respondents.

Among its other findings, the survey found U.S. Muslims were more optimistic about the direction of the country than other religious groups. Some 60% of U.S. Muslims approve of President Joe Biden’s job performance, and 81% are registered to vote — a huge jump over 2016, when a previous poll found only 60% were registered.

The survey also finds that in keeping with all other minority faith groups, U.S. Muslims are most likely to register as Democrats (46%) or independents (40%). Only 10% registered as Republican. 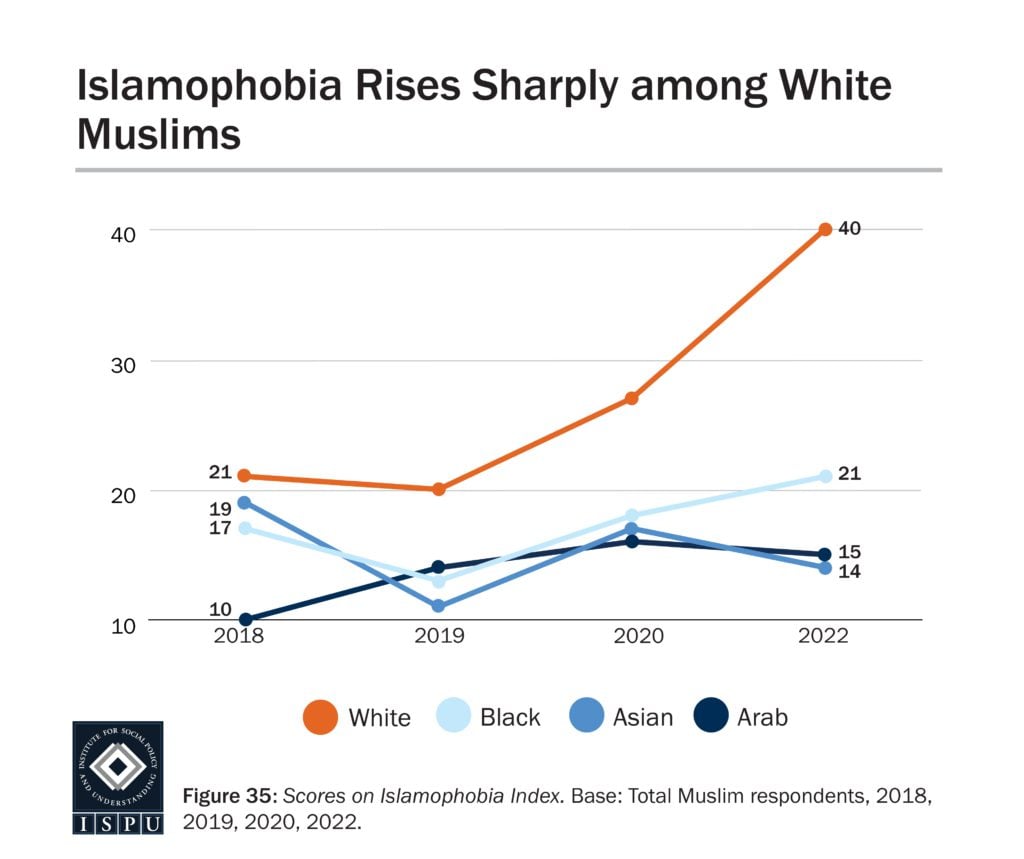 Despite their optimism and high rates of civic engagement, 60% of Muslims also said they experienced discrimination — more than Jews and the general public. Most of the discrimination they experienced was in institutional settings: when applying for a job (37%), when interacting with law enforcement (38%), at the airport (44%) and when seeking health care services (27%).

This year, the survey also asked about discrimination on social media and found that 46% of U.S. Muslims said they experienced bias, such as having messages removed, having accounts closed or being kicked off a platform.

But the finding about internalized Islamophobia was the most concerning, especially since it has grown. Between 2020 and 2022, the score increased 6 points, from 20 to 26.

Studies have shown that minorities can internalize the negative stereotypes of their group from popular culture, news media and political rhetoric, said Muniba Saleem, a professor in media psychology, intergroup communication and diversity at the University of California, Santa Barbara.

Internalized Islamophobia, the study found, was more prevalent among younger Muslims — those born after the 9/11 terrorist attacks in which Muslims were demonized and then surveilled by law enforcement. Abed A. Ayoub, legal and policy director for the American-Arab Anti-Discrimination Committee, said the growth of white supremacy and white Christian nationalism may also be influencing Muslims’ own sense of themselves.

“Are our younger folks picking up sectarianism from spaces on the internet where right-wing conspiracy theories are put out there for their own benefit?” Ayoub asked in a webinar on the survey.

In the case of the Albuquerque killings, the suspect, who is Sunni Muslim and originally from Afghanistan, appeared to be angry at Shiite Muslims. (Sunni and Shiite Muslims differ in their beliefs over who was the proper successor to the Prophet Muhammad, among other things.)

“There are differences in beliefs,” Ayoub said. “We can acknowledge those and respect those. That doesn’t weaken us. Our foundation and core are the same. We do need to start addressing this in our mosques and institutions. We need to get a hold of this conversation before right-wing media spaces fill that void.”