Rarely does news from my childhood hometown of Wausau, Wisconsin, trickle over to my current hometown of London, England. Then bam: “Wausau School District Cancels Christmas.” Whoops. That’s not a headline; it’s the name of a Facebook page that overhypes what actually happened. A Facebook page set up by concerned parents and community members in Wausau, Wisconsin.

Basically, the school district issued guidelines to limit the number of religious songs school choirs can perform. After community backlash, and maybe after seeing how concerned that distracted kid in the back row looks, the school board kicked the decision back to school principals and said it would create a new policy – with the public’s help – sometime in the next year.

An elementary school in Pennsylvania really did cancel Halloween festivities, telling parents that a Supreme Court ruling required it to do so. District officials quickly reversed the decision. Costumeless kids in Canada are probably hoping that their school will do the same.

The American Civil Liberties Union is asking a Maine school district to apologize for letting a Christian ministry preach to students about abstinence. The ACLU also forced an Ohio school district to keep a portrait of Jesus off its walls and pay $95,000 in damages and legal fees.

After bringing in a pastor to preach on 9/11, a school district in Tennessee plans to retrain its teachers on church-state separation.

Some U.S. taxpayers are wondering why they spend almost $1 billion a year on school voucher programs when some students are taught creation as science and that the Loch Ness Monster is a living dinosaur.

Lauren Markoe reports that some progressive Catholics are hoping their schools will stop firing gay teachers, despite the practice being constitutionally OK.

At the university level, the Yale Humanist Community was denied membership in a faith group that serves the school because it is explicitly nonreligious. Kimberly Winston writes, “The situation underscores a hot-button issue in the broader faith community: To what extent, if any, should groups that deny the existence of God be included in interfaith communities and efforts?”

The Catholic university Loyola Marymount in Los Angeles voted to eliminate elective abortions from its staff’s health care coverage. The Catholic Diocese of Pittsburgh is suing the federal government to ensure that it isn’t forced to provide contraceptive coverage under Obamacare.

Nebraska’s Supreme Court told a 16-year-old foster child that she can’t have an abortion because she can’t secure parental consent.

In Ohio, a court ruled that a hospital can force a 10-year-old Amish girl to resume chemotherapy despite religious freedom pleas from her parents who favor “natural medicines.” This follows similar recent cases among Jehovah’s Witnesses in New Zealand and Australia.

The evangelical group Answers in Genesis placed a digital billboard in Times Square last week that reads, “To all of our atheist friends: Thank God you’re wrong.” The Freedom From Religion Foundation countered the billboard with one in the same spot that reads, “OMG, there is no god!”

A billboard in Texas featuring a drawing of Jesus tattooed with the words “Outcast,” “Addicted” and “Jealous” has angered some local Christians, even though the campaign is for a Christian group.

The group American Atheists, which has run some pretty controversial billboards of its own, is threatening to sue Montgomery, Alabama over the city’s taxpayer-funded “Operation Good Shepherd” program, which allegedly sends pastors to crime scenes to preach Christianity.

A federal judge awarded $66,000 in back pay to a Muslim security guard in Seattle who alleged that he was fired for refusing to shave the beard he maintains for religious reasons.

Before we move on to international news, check out this interview I did with Northwestern University’s Elizabeth Shakman Hurd. She argues that America’s religious freedom outreach efforts may do more harm than good.

Saudi Arabia blocked a campaign website last week that encourages women to drive. Women on the country’s top advisory council have called for a discussion to address all “excuses” used to prevent women from getting behind the wheel.

In Jerusalem, a feminist Jewish prayer group that started a campaign to allow women to pray with men at the Western Wall is now supporting a watered-down proposal that would create a separate mixed section for prayer.

Christian leaders in Jerusalem are upset over a string of recent attacks on cemeteries, and Jewish settlers allegedly vandalized a mosque in the West Bank. 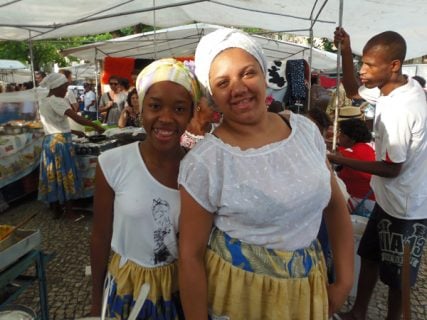 (Left) Juliana Lima and Jenifer Felicio pose for a photograph. Candomble youngsters grow up in the faith but ofter suffer discrimination because of their beliefs. Photo by Robson Coelho

Perhaps the region could learn a thing or two from Brazil, where government officials launched a new diversity campaign to combat religious discrimination.

A Malaysian court ruled that a Christian newspaper may not use the word “Allah” when referring to God. This battle has been raging for more than five years, as I reported in a country profile on Malaysia last month.

In LGBT news, Kuwait announced a proposal to set up clinical screenings that would detect homosexuals and bar them from entering Kuwait and other Gulf Cooperation Council countries. Freedom House condemned the proposal. I mean, how would you even … I digress.

Church leaders in Bermuda are urging the government to make religiously motivated discrimination against homosexuals legal.

Russian lawmakers will debate a bill during the Sochi Olympics next year that could take children away from gay parents. Human Rights Watch launched a campaign documenting abuses along the Olympic torch’s path through Russia.

The Christian Science Monitor reports that a (mildly) controversial Quran translation is just the latest in a slew of recent bans on religious texts in Russia.

The Taliban, responsible for shooting Yousafzai in the head last year to stop her campaigning for girls’ education in Pakistan, renewed its threat against the teen, vowing to harm her if she speaks out against strict implementations of Islamic law in the country. Maybe people can form human chains to protect her, as Muslims did to protect Christians praying in Pakistan last week.

On to the United Kingdom, where the Scout Association (think British Boy Scouts) welcomed nonbelievers for the first time by changing its pledge, no longer requiring scouts to “do their duty to God.” They’re still required to do their duty to the queen, who is Supreme Governor of the Church of England and Defender of the Faith. Oh England, so confusing.

Even more confusing is the fact that senior leaders of the English Defence League, which regularly protests against “radical Islam” (and disrupts traffic with xenophobic rallies in my neck of East London) quit their posts after conversations with a counterextremism Islam-focused think tank.

Christian lawyers in the U.K. plan to sue two doctors who arranged the abortion of female fetuses because the parents wanted boys. Officials declined to prosecute the pair because the Abortion Act of 1967 “does not expressly prohibit gender specific abortions.”

Across the channel in France, the United Nations Human Rights Committee said that requiring Sikhs to remove their turbans for passport photos violates their religious freedom. Outside Paris, a teenage girl was subjected to a weeklong, crucifixion-style exorcism. She barely survived the ordeal.

I don’t think I’ll find anything crazier than that that exorcism story this week, so better quit while I’m ahead. Sign up below to get next week’s newsletter straight to your inbox.

Martini Judaism
During the Colleyville crisis, the sounds of silence
Follow us on Facebook!
Submit your photos to RNS