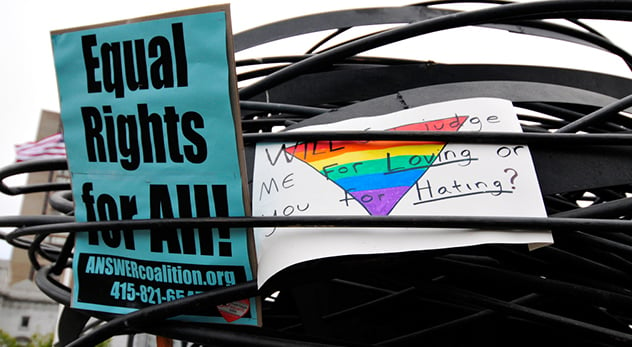 To hear some commentators talk, debates on LGBT issues are over and conservatives have lost. But such predictions are premature. (Image credit: http://bit.ly/1GXzzyo)

The 1.7 million-member Presbyterian Church (USA) on Tuesday voted to officially approve of same-sex marriage, an announcement that shouldn’t surprise anyone who has followed the mainline Protestant denomination’s trajectory. Perhaps a more substantial but less widely reported story was the decision by City Church, San Francisco’s largest evangelical congregation, to affirm LGBT couples.

Evangelicals are among the most stalwart opponents to LGBT marriage, but a number of evangelical congregations have publicly shifted their stance in the last year. Among them are Seattle’s Eastlake Community Church, Nashville’s GracePointe Church, Portland’s Christ Church, and New Heart Community Church in La Mirada, California. Other prominent evangelical pastors tell me off-the-record that they are in the midst of similar conversations.

Churches aren’t the only evangelical factions inching left on matters of sexuality. Popular Christian musicians and worship leaders have either come out of the closet or publicly voiced support of LGBT equality. And evangelical publishers have released a glut of books taking progressive positions on sexuality and marriage. These stories are part of an ongoing media narrative about shifting evangelical attitudes on LGBT issues.

Whenever such stories are reported, polls are cited to show the retrenched stance of evangelicals on the matter. But it is easy to fail to read the footnotes on these surveys or to only pay attention to polls that confirm one’s bias.

The Barna Group, for example, reports that evangelicals have “become more resistant toward LGBTQ concerns on several fronts.” But Barna uses an extremely narrow nine-point definition of evangelical that is not embraced by any other major polling organization. A closer look at this study reveals that support for LGBTQ concerns has increased among every other subset of Christians, and a broader look at data from organizations such as Pew Research and Public Religion Research Institute shows evangelicals are indeed shifting. If the Supreme Court legalizes same-sex marriage nationwide as early as this year, shifts in public opinion could quicken.

The data make clear that opposition to same-sex marriage is coming only from a small and aging subset of the Christian world, and if you follow the headlines, it feels like an invisible finger has flicked the first domino in a long row of tiles. But don’t be fooled. Evangelicals are still mostly opposed to same-sex marriage and concerned about how gay rights might infringe on religious freedom. A lot of time remains on the game clock, and much of the field is yet to be negotiated.

But the goal posts have moved. Many conservative Christian leaders and political organizations tell me that they consider same-sex marriage to be a fait accompli, and most seem to have shifted their attention away from legally banning gay marriage and now focus on churches, non-profits, and businesses.

The Southern Baptist Convention cut ties with New Heart Community Church after their pastor endorsed homosexuality, and the Evangelical Covenant Church withdrew their support of Christ Church after their pastor made similar statements. After World Vision announced they would hire persons in LGBT marriages, the swift public outcry forced them to renege. And conservative Christian organizations are pouring money and energy into religious liberty battles to protect Christian florists, cake bakers, and photographers from having to serve LGBT couples.

The jury is still out on each of these matters, and it is possible that compromises may arise. Consider, for example, how evangelicals evolved on the issue of divorce during the past three decades. As the general public became more accepting of divorce, many conservative Christians followed suit. But others found ways to be more inclusive of divorced Christians in their congregations and communities without moral affirmation of divorce itself. It seems quite possible that a similar path may be carved on sexuality.

To hear some commentators talk, debates on these matters are over and conservatives have lost. But such predictions are premature. Some evangelicals have indeed shifted on LGBT issues, but it’s no avalanche—at least not yet.