YORKVILLE, Ill., (Reuters) The Christian liberal arts college in Illinois where former U.S. House Speaker Dennis Hastert graduated removed his name from its policy center on Sunday (May 31), as his hometown struggled to digest news of criminal charges that could destroy a local hero’s reputation or worse.

The decision by Wheaton College to change the name of the J. Dennis Hastert Center for Economics, Government and Public Policy is part of the early fallout from a scandal that is still unfolding.

Hastert, 73, Republican speaker of the House of Representatives from 1999 to 2007, was indicted on Thursday (May 28) for withdrawing hundreds of thousands of dollars in cash in small increments to evade reporting rules on large bank movements, and then lying to the FBI about the money.

The federal indictment said Hastert paid the money to someone to conceal and compensate for past misconduct. Hastert promised a total of $3.5 million to the person in hush money, it said.

The cash exchanges had to do with sexual contact decades ago with a male former student of Hastert when he was a high school coach and teacher in Yorkville, Ill., various national media have reported, citing unnamed law-enforcement officials.

“The secret was big enough in his mind that he was willing to pay millions of dollars,” said Jeffery Cramer, senior managing director of Kroll Investigations and former federal prosecutor in Chicago, who is not involved in the case.

Hastert has not made any public statements since the charges were made public on Thursday, nor has a defense lawyer surfaced.

According to financial disclosure forms from his last year in Congress, 2007, Hastert lives on a rural property in Plano, Ill., near his hometown of Yorkville. He also owns a farm in Wisconsin, a 50 percent stake in a commercial building in Plainfield, Ill., and a townhome in Washington. He was worth between $3 million and $12 million.

Reuters was not able to reach Hastert, who did not return phone calls. His home in Plano, southwest of Chicago, is not visible from the road, and a fence announces that trespassers will be prosecuted.

He is due to be arraigned this week in Chicago, before federal Judge Thomas Durkin. The magistrate on the indictment recommended bail of $4,500, but that can change at the court appearance.

The Chicago Tribune reported on Sunday that federal sources said that a second man “accused Hastert of past sexual misconduct.” The newspaper did not name its sources. Any allegations of sexual abuse from the 1960s or 1970s would not lead to prosecution since the statute of limitations has run its course.

In Yorkville, 50 miles southwest of Chicago, a rural city of 17,000 where chickens and horses roam the farmland and everyone still knows everyone by name, acquaintances had trouble believing the charges.

Area residents know Hastert as “Denny” and were quick to cite his good character and approachability despite having risen so high.

Several residents over the age of 50 said almost everyone who grew up in the area had some sort of experience with Hastert, a teacher and coach at Yorkville High School in the 1960s and 1970s.

“There was never an inkling of anything wrong. He was always revered as a great coach and great guy,” said a man in his 50s who played football at Yorkville as a freshman when Hastert was assistant coach on the sophomore team. He did not want to give his name for publication.

Another man in his early 50s, eating at a Dairy Queen, said he thought so highly of Hastert that he crossed party lines to vote for him.

“I’m a Democrat and I voted for him,” the man said. “Everyone is innocent until proven guilty. He is a good guy. Maybe he just feared the allegation would ruin him.”

Hastert’s years as speaker were book-ended by two sex scandals involving other lawmakers. But he was always seen as above the dirt.

Hastert was propelled to the speaker’s chair in 1999 following the departure of predecessor Newt Gingrich. He was considered by fellow Republicans to be a patient listener, kept a lower profile and was seen as having a softer edge than the abrasive and hard-charging Gingrich.

Gingrich stepped down three days after the 1998 elections, which took place amid House impeachment proceedings against President Bill Clinton over his sexual affair with a female intern. Gingrich’s would-be successor, Rep. Bob Livingston of Louisiana, then was forced out by another sex scandal before he even assumed the speaker’s post.

Shell-shocked House Republicans reached a consensus within hours that Hastert, often referred to as “the coach” and known to talk in sports metaphors about his “squad,” should be the next leader.

Another sex scandal cast a shadow over Hastert’s last months at the helm of the House in 2006 and 2007. Republican Rep. Mark Foley of Florida was caught sending inappropriate emails to congressional pages, the teenagers who run chores and errands for members of Congress.

Hastert said he did not know of the extreme nature of the emails until they were reported in the press and thought earlier signs of trouble had been addressed. The House ethics committee said, without finding any wrongdoing, that the House leadership had responded inadequately to the problem.

After he left Congress, Hastert became a well-compensated lobbyist.

Hastert resigned on Friday from both of those boards, from the Washington lobbying firm Dickstein Shapiro, and from the board of advisers to the center that once bore his name at Wheaton, in Chicago’s Western suburbs. 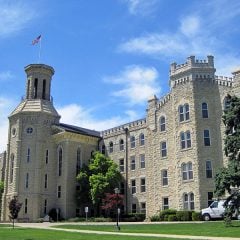 News
Fired from Wheaton, former chaplain Tim Blackmon speaks out on allegations, what’s next
Follow us on Facebook!
Submit your photos to RNS