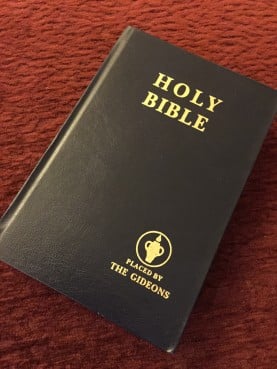 KUALA LUMPUR, Malaysia (RNS) See this book? It was in my hotel room here in Malaysia. It’s in hotel rooms around the world.

But here, this book is banned if it is written in Malay, the official language of the country’s 30 million people. Anyone who sells one, gives one away or imports one will go to jail. Christians may own Bibles only for their personal use, according to a 1982 Malaysian law.

There is another law, too — only Muslims, who make up the majority of the population at 61.3 percent — may use the word “Allah.” There are other words banned for non-Muslims, too — “al-kitab,” an Arabic word often used to refer to a book of scriptures, including the bible, and “salat,’ another Arabic word meaning charity. In all, 34 words are reserved for Muslims only.

“No (Christian) can use the word ‘Allah’ in this state,” said Rev. Lawrence Andrew, a Malaysian Catholic priest and editor of The Herald Malaysia, a Catholic newspaper. “Can you imagine? Our sacred book has become controversial and is being forbidden. But Article 11 of the constitution says we have freedom of worship. But this has been overturned.”

Rev. Andrew spoke to us — the 18 international journalists traveling here as part of the East-West Center’s fellowship for senior journalists — as part of a 90-minute exploration of how just how free Malaysia’s religious minorities — Buddhists, Christians, Hindus and Sikhs — are to practice in a country where Islam is the official religion.

According to Andrew and Tan Kong Beng, executive secretary of the Christian Federation of Malaysia who was also part of the dialogue, the answer is not very.

“Even when we give a hand of help to others we are accused of all kinds of things so politicians can divide and rule,” Tan said. He then described Christians as “punching bags” who follow the bible’s maxim of turning the other cheek. “I say, yes, turn the other check. But what happens” when there are no more cheeks to turn, he said.

Lawrence, too, seemed inclined to give up passivity. The government has suspended his newspaper’s right to publish and he has been charged with sedition — all for upholding the rights of everyone to use the banned words.

The tone was the much the same when we met with Hindu, Buddhist and Sikh leaders a day later at a large Buddhist temple in the middle of the city. There we heard stories of forced conversions to Islam of children in mixed marriages, temples being burned or forced to relocate by the government, and of discrimination against non-Muslims during the Islamic holy month of Ramadan.

“They use race and religion to divide people,” the leader of the temple told us. “That, to an extent, is what is happening in this country.”

The courts divide them, too. There are two parallel court systems in Malaysia, a secular one and a religious one. The religious one is Islamic and is called the Syariah — or shariah — Court. It applies Islamic laws only to the country’s Muslim citizens and only in personal and religious matters — marriage, divorce, alimony, child custody, etc.

But there is another legal code at accepted in the more rural, fundamentalist areas of Malaysia. This is “hudud law,” a form of Islamic law that imposes amputation, stoning and flogging for offenders. It is already in place in Kelantan state and there is a push to apply it across the country. So far, no thief has lost a limb, no adulterer been stoned. But the idea has many moderates in Malaysia very concerned. And a question about hudud’s conflicts with basic human rights accepted around the world seemed to stump Dr. Haji Mohd Na’im bin Haji Mokhtar, a Syariah Court justice who met with us and showed us around one of the courtrooms.

“That is very difficult,” he replied. “What should I say?” He paused for a few seconds and then continued, “The Holy Quran, the offenses and punishments are clearly prescribed in the Quran. So whether you are a judge or an expert, as long as you are a Muslim who believes in the Quran, then we have to subscribe it.”

The trick, he said, is to apply hudud “with justice.”

If that wasn’t chilling enough, we visited a very conservative madrassa, one I will not name out of security concerns, but will describe in another report.